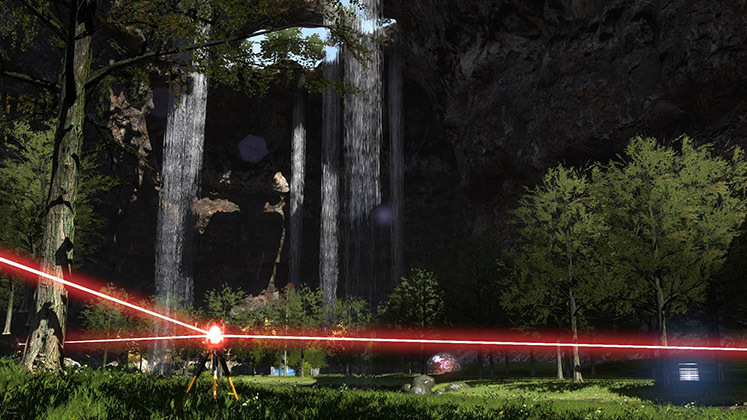 Probably the most refreshing thing about The Talos Principle is that it doesn’t try to hide its artifice. It’s right there, from the beginning: your robot fingers, stretched out before you. It’s in your movement: always bolting forward in a way that is blissfully fluid but a little too fast before stopping on a dime, jumping onto a box, and wrapping your weird fingers around the equally cold metal of some bizarre machine.

The machine is a jammer; it jams. What it jams are the different obstacles that come together to create the antagonistic puzzles of this artificial world. They are: doors made of blue light, oversized mines that course back and forth in predictable patterns, unleashing angry beeps and explosions when you get too near. Machine-gun turrets stick out of walls, their red lasers waiting to sense your cold, robotic non-flesh. These are the anachronisms of technology set in ancient nature. Their worksite yellows and gunmetals stand out against the lush colors of your surroundings: old ruins overgrown by greenery; rolling sands amid Egyptian-inspired walls; snow-crested ruins atop windy mountains. None of them are real, though. This much the game wants to be clear.

It starts with the first time you die: you’re rewound like an old tape in a VCR, sent back to the beginning of an episode. Every time you stray too far towards the mountains in the distance, a great booming voice castigates you. Turn back, or be rewound. Fuck up a puzzle? Hold down a key to bring up your robot arm, and hold a digital finger to its reset button, a pillow on the face of a former self who’s too far gone. Walls bzzt in and out of existence around you, like static nothing. Magical portals send your perfect copies into worlds linked by old service elevators. The occasional square of ground falls away into a grey, disused room. Floating Tetrominoes sit floating at the end of labyrinths, waiting for you to bypass brainteasers and collect them, line them up into grids to unlock doors that open into new spaces filled with more puzzles, more Tetrominoes.

These are the anachronisms of technology set in ancient nature.

The greatest weakness of The Talos Principle is its tendency to linger. It’s there in the safety of the early game, as you nurture your mechanical vocabulary and then hit some odd plateau where the only thing that grows is the number of puzzles you’ve completed. New things don’t come fast enough; the game is too content to rest on its laurels of jammers and diverters and dual-color laser beams—pitting you against room after room of organizing beams in the perfect arrangement against a cacophony of walls and obstacles.

What it should be doing is leaping forward at a rapid pace towards its triumphant latter-game tools: things like fans that send you and objects flying or raise them to new heights, or a recording device that observes you from on to off, only to replicate your movements in a mysterious blue haze, as your duplicate does what you’ve just done, only this time, alongside you. They’re solutions to puzzles that are joyously exhausting; after each one finished I had to exit the game, go read Twitter, maybe get a glass of water—whatever the digital post-coital cigarette equivalent. While it’s possible to brute-guess your way through setting up a bunch of lasers, it’s impossible here, when you’re relying on your perfect self. You’re not so much Ajax as you are Odysseus, scheming around the puzzle’s knees, standing stationary while you figure out where you need to get your soon-to-be-past-recorded-double going, and how you’ll walk next to her, stacking boxes upon boxes. 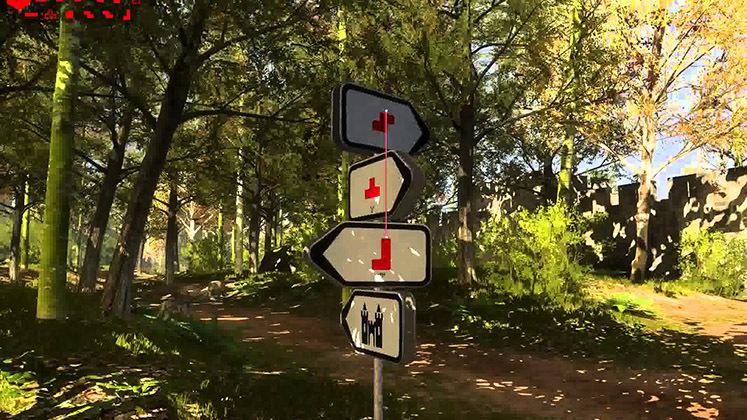 This is the great theme of The Talos Principle. If it’s a game about puzzling, it’s also a game about philosophy. The booming voice is Elohim, a coy mix between god and acronym. If he is your god, the puzzles are the plots of his garden, the flora and fauna an intoxicating language of puzzles. Your existence is tied somewhere to his will, which is that you finish puzzles, collect Tetrominoes, arrange them to open more doors, and then finish more puzzles, building towards some great something amid all this beautiful nothing: picturesque expanses of deserted non-nature, a simulation designed for you, and all of the robots that have come before you, some final experiment in immortality paved with long-gone shoulders.

The Talos Principle’s dressing is the mysterious post-apocalypse. There has been some disaster, and humanity, in your experience, is the recordings you hear, the text you find. Impossible computer terminals sprout up from grassy knolls, sit peacefully between stone pillars, their emails, chat sessions, and mythological discussions an archive of collaborative people, the gone inhabitants of a dead message board, a testament to some attempt at immortality. In here, death is nothing; outside, it is everywhere.

And there, it sits at the periphery, frustratingly alongside a narrative that comes close to but never actually touches the game you’re here to play. In antithesis of the booming Elohim is a serpent, an other, a process/thing/text that speaks to you through terminals, investigates your thoughts and feelings on existence, the self, identity, purpose. Are you human?, it wants to know. What do you think? Except it’s not after your thoughts; it’s after your avatar’s.

Building towards some great something amid all this beautiful nothing.

Early on, this chat room other goads you: maybe god isn’t real? Maybe you don’t need to complete all of these puzzles to finish whatever it is you’re here to do. It’s a classic seed of doubt that yearns to strain against the narrative, and sets up twin endings (one better, one lesser, depending on how much you want to listen), but the truth is, you do need to complete all of these puzzles. Later puzzles are dependent on mechanics that are unlocked by earlier Tetrominoes, and the endings are gated with completion. Whatever hint of you as player-as-rat-in-pointless maze is abandoned; this is between the game and your robot likeness as she tries to be the final product of some world-rebuilding machine.

Which is fine: not all games have to aim towards some meta-narrative or commentary on the nature of play, but to ignore the obvious correspondence between player vs. game and protagonist vs. puzzle-existence is to ignore a laundry list of references: Talos, Milton, Kant. The list goes on: Jonas Kyratzes, co-writer, responded to a Steam thread about preliminary readings with the likes of Hegel, Russell, Blake. It’s a well-read and high-reaching story and discourse on the nature of existence, but it’s not just in the backseat to a seemingly disparate puzzle game, it’s on a conference call in Boise while you’re huffing Tetrominoes in Las Vegas. 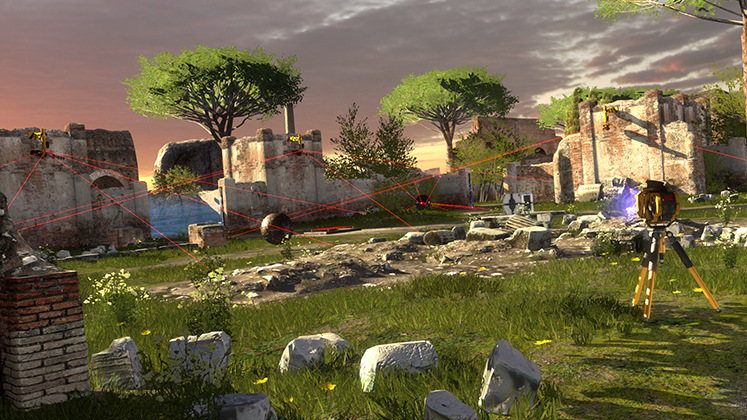 This narrative distance and the slow difficulty curve both point to the same thing: an over-reluctance to lose or alienate an audience unwilling to engage with philosophical thought or difficult puzzles. But that belies the ideal audience for a philosophical puzzle game: an audience willing to try. If that Steam thread is anything to go off of, they’re already there; ready, eager, and excited to engage with a team of developers just as excited about the same things. The evidence is in the massive, daunting puzzles that span numerous arenas, the diaries of dead dreamers, the questions about free will and the nature of self. Building together, alone.