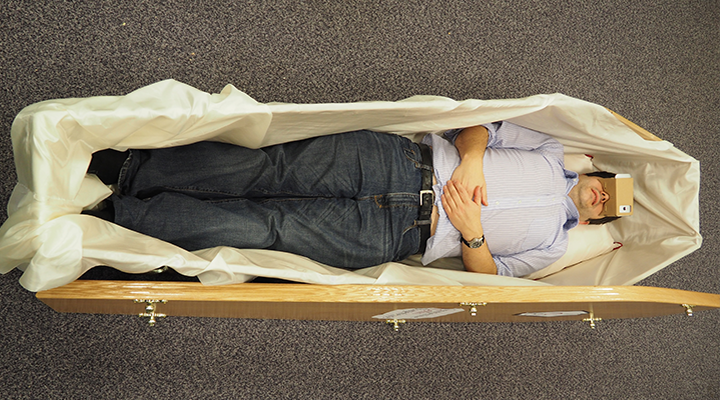 Taphophobia, the fear of being buried alive, is described as being “irrational.” It’s not. An irrational fear is being scared of being shot into orbit while sleeping, or crocodiles crawling down your chimney—the likelihood of either happening is super slim. But you could be buried alive tonight or tomorrow, and with terrifying ease. A spiked drink, a couple of hours, and a spade is all that’s needed.

how about you voluntarily get buried alive?

Also, those who would deem it an “irrational” fear should be careful where they’re poking that word. Of the many people inflicted with taphophobia over the years, among them are influential greats such as Edgar Allen Poe, Chopin, and Hans Christian Anderson. Would you call them irrational for any other reason? I should hope not.

Let’s say you are one of these people who goes out of their way to mock others for their fears, what can be done with you? Well, short of throwing a deadly snake at you, or locking you in a freezer, how about you voluntarily get buried alive? Seriously: that’s the concept behind virtual reality game Taphobos.

It’s played with two people. One of you hops into an actual coffin with a virtual reality headset hanging over your face. It’s here that you proceed to get snug up to the elbow in the morbid wooden box, or carry out the entirely rational act of crapping yourself. The other person sits at a computer also with a headset, and awaits the instructions that will soon be murmured into their ears, travelling as a shaky voice from the occupied sarcophagus.

simulate dying inside a virtual coffin.

The idea is for the person inside the coffin to examine the underside of the casket’s lid, upon which a map has been drawn in crayon. They then have the amount of time it takes for them to use their limited air supply to guide their partner at the computer to the coffin’s position inside the virtual world. Do so, and you’re saved from certain death, but not from becoming part of the taphophobic population. If you don’t, then you get to simulate dying inside a virtual coffin. Taphobos‘s five-person creative team say that it allows you to experience “what it would be like if you were buried alive with just a phone call to the outside world.”

The answer to the query that the game invites (what’s it like being buried alive?) is probably revealed in the research project that it has since become part of at the University of Lincoln. It’s called, rather directly, “Uncomfortable Gaming Experiences.” Yep, that seems an appropriate way of putting it. Taphobos isn’t restricted to studying, though, and has been shown in public at Game City 9, and will also make an appearance in London at Rezzed‘s Leftfield Collection between March 12th and March 14th.