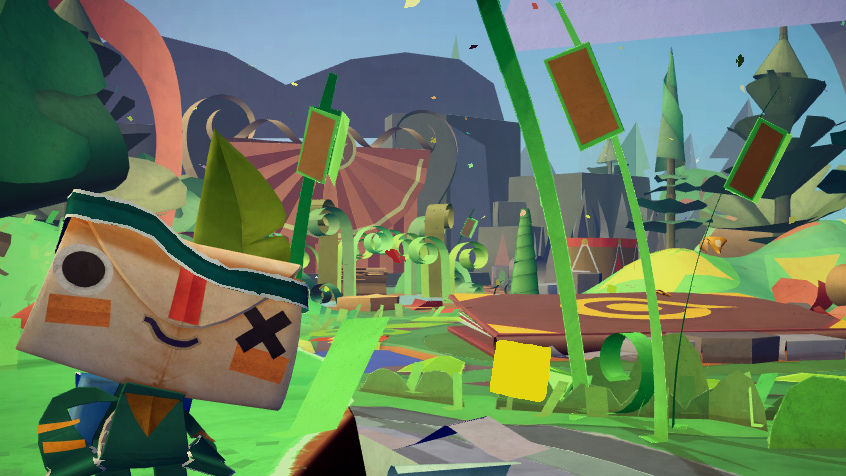 I have a wood panel background on my Vita’s menu screen. It makes what is an otherwise cold and synthetic piece of machinery feel a bit more organic, a bit more alive. The warmth of a rustic photo doesn’t change the fact that the experience of playing videogames on the system is, like most consoles, a pretty sterile experience, though.

Playing Media Molecule’s Tearaway is the opposite. It is engaging in the same way that dribbling a basketball or picking at a guitar is engaging. Something is always happening to connect your body and your surroundings to the experience itself. Tearaway‘s papercraft world is more than an aesthetic: it’s also a bridge between the physical and digital worlds.

It’s tough to describe Tearaway without using personal pronouns since the player is never far removed from its mechanics. There is no distance between you and the world portrayed on the Vita’s screen. An early section of the game where my avatar climbs a mountain encapsulates what Tearaway is all about. My character is personalized with unlockable scraps of paper decoration that give him a single cyclopean eye and a tattoo of a pink heart on his cheek. The sun looms over the cliffs, the Vita’s front camera placing my face in its centre so that I can pull faces and mug for the little paper people staring up at my incursion into their world in awe. Snowflakes, now red and yellow after having been changed from plain white by my own design, whip through the air. My character carries a pumpkin from scarecrow to scarecrow in order to get past the crowds of birds blocking the way through various mountain passes. This pumpkin has a custom designed face—pointy fangs and spooky eyes—that I have pasted onto it in order to frighten the crows as much as possible. An elk asks me to give it a new coat that will help it to stand out from its friends. I take a photo of a poster on my wall and the animal is now emblazoned with the black and white details of the Picasso reprint hanging in my apartment. Everything is personal, touched by the details of your own life and your own home.

Everything is personal, touched by the details of your own life and your own home.

Each of Tearaway‘s levels is like this. The game’s already endearing enough for its meticulously detailed paper environments and touch-augmented navigation (push a finger against the back of the Vita to thrust a finger up through the ground of the world; tap an overturned enemy to make it burst into confetti). But it’s the  inclusion of personalized touches that makes it feel like something much more than a digital product. In this way, it’s a more fully realized version of the digital naturalism that Media Molecule’s LittleBigPlanet series previously explored. In those games the burlap, yarn, and cardboard that filled its visual design served as a visual shorthand for the real world. Instead of crafting a cartoon character as mascot the studio created Sackboy, a customizable puppet made out of fabric. Players were asked to make the Sackboy they controlled their own by slapping collectable clothing and facial features onto it. This was an introduction to LittleBigPlanet‘s level creation tools and a follow-through on Stephen Fry’s enthusiastically narrated insistence that the game was waiting for You to make it Your own. It worked well, but the inherent limitations of the PlayStation controller’s traditional buttons-and-analog-sticks layout meant that the player was always going to feel slightly removed from the world represented on the television.

Tearaway takes its developers’ aims further by coupling the tactile nature of touch screens with constant prompts to bring the player’s face, surroundings, fingers, and creativity into most every gameplay scenario. It uses its choice of console platform—the camera, accelerometer, and touch-enabled Vita—as a means to further extend an invitation to delve into its universe. All of it works to transcend the usual gap that exists in a medium that prides itself on being the most interactive form of entertainment/art yet to exist. No other videogame has worked so hard to make its player such an integral part of the experience. Tearaway‘s greatest achievement is in how effortlessly it makes the technological feel organic. It is, without doubt, the warmest a game has ever felt and the greatest assurance to date that the digital age doesn’t have to be defined by artificiality.