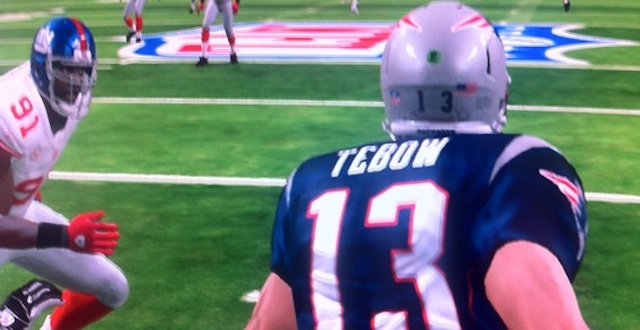 A four-month-old’s sleep is a precious thing, not so much to the child as to the parents whose arms still ache from the hours of holding and swaying the night before. Parenthood, they tell you, redefines sleep. All the more reason I felt like an idiot when I woke my napping son to celebrate the Patriots victory over the Giants in Super Bowl XLVI.

Of course, this wasn’t the real Super Bowl—how could it be? The actual game is still a few days away, and besides, it’s not played on a Monday. No, this was a simulated game I was running using EA’s Madden NFL 12: the computer was playing against itself. It was pretty ridiculous of me, then, to jump out of my seat as the digital, 3D-modeled Patriots kicked a 42-yard field goal with four seconds left to win the game, thus waking my sweet little son.

Sports videogames allow fans of the game to explore the spaces around the game.

Every year EA Sports contributes to the general journalistic pandemonium leading up to the Super Bowl by running its own, official simulation of the big game, featuring its flagship NFL title Madden as the engine. The game is run just once, and the studio publishes an edited video of footage from the videogame. Over the past eight years the simulation has been remarkably accurate, correctly predicting the winner all but one time (in 2007, when the game picked the Patriots to win against the Giants). The simulation EA runs is pretty basic, but its success in prognosticating the outcomes of games speaks to the effort and care the designers put into creating a balanced representation of real NFL football. It ensures that the rosters for the simulation are accurate, sets the game to 15-minute quarters, and simply lets the game play itself. But EA does not offer much in the way of details about how the simulation is set up and run, leaving viewers to wonder about the relative “objectivity” of the test.

According to EA this year, the Giants beat my beloved Patriots on a late field goal 24-21.

EA’s simulation—and its unfortunate outcome—got me thinking to use the Madden engine’s impressive power to run a slightly more rigorous, and frankly more interesting, set of tests. In addition to simulating actual Super Bowl conditions, the videogame’s flexibility allows for some interesting counter-factual situations to be tested and explored. This is, in fact, the great power of a sports simulation videogame like Madden. The game operates under the specific constraints of the sport of NFL football, but affords players the freedom to explore fantastic possibilities—some within the realm of possibility, like players getting hurt or a change of venue; others more extreme, like having the same player as quarterback on both teams. Sports videogames allow fans of the game to explore the spaces around the game.

What if it were snowing at the big game? What if both quarterbacks, Tom Brady and Eli Manning, were hurt? What if both teams had Tim Tebow starting instead? With Madden NFL 12 as our simulator, I had a lot of room to play around with football itself.

The first test I ran was a series of “standard” Super Bowls, not at all unlike EA’s sim. To run a more rigorous test than EA’s, I ran the game five times to take the average statistics from the set, thereby reducing the influence of a “flukey” outcome.

In three of the five standard games the score was close, while the other two games were a blowout for each team. In the final average, the Patriots actually won 28.8 over the Giants’ 25.6. Interestingly, this closely mirrors the spread of 3 points for the Patriots set by bookies taking bets on the big game.

Tom Brady, summoning the spirit of his Victoria’s Secret guardian angel, had the performance edge over Peyton Manning’s twerpy little brother Eli, averaging a QB rating of 94.6 to Eli’s 83.4. This statistic is a convoluted algorithm for measuring a passer’s overall performance. It, somewhat absurdly, tops off in the NFL with a perfect score of 158.3. Eli did, however, average more touchdowns and yards than Brady, with a mean of 343.0 yards and 1.8 touchdowns to Tom Terrific’s 283.4, 1.4. Not surprisingly, the somewhat skittish Eli also threw more interceptions than Tom, coughing up the ball 2.4 times per game to Brady’s paltry 0.8. There’s been a lot of talk comparing these two quarterbacks leading up to the Super Bowl, but this set of simulations affirms Brady’s dominance.

Surprisingly enough, then, it was the much-maligned Patriots defense that made he biggest difference in the five games. In addition to the 2.4 picks per game, the defense also gobbled up 1.4 fumbles to push the turnover average per game to 3.8. The Patriots’ linebacking core contributed a handful of the picks, with the unlikely Brandon Spikes leading the way.

So there you have it: call your bookie. If Madden NFL 12 and I have anything to say about it, the Pats should cover the spread.

Snow in a Dome

I know you’re thinking, it can’t snow inside (unless you are in Dubai). But what if the Super Bowl were being played in the snow? There has never, in the entire history of the NFL, been a Super Bowl in the snow. Would the windy, sloppy conditions affect the outcome?

My test says yes, and emphatically so. According to the simulation, the snow gives the Giants a dramatic edge in the game, averaging a win by a score of 32.0 to 14.6. Apparently Tom Brady can’t handle the snow (really?), as he throws an average of 3.0 interceptions to Manning’s 0.8. Maybe Tom is so accustomed to spending time in the heat of Brazil with wife Gisele that the snow really got to him. In the end, though, it was the Giants’ punishing ground game that took advantage of the snow, averaging 180.6 yards per game on the backs of Bradshaw and Jacobs.

So I guess New York fans should be hoping for a freak snow storm in Lucas Oil Stadium in Indianapolis is weekend. Snow. In a dome.

He caught the attention of the whole country, from Jimmy Fallon to Rick Santorum. His name invokes the sinew and spit of his composition. Tebow’s outward demonstrations of his Christian faith, along with his ability to seemingly will a terrible Broncos team to win, captivated the nation for months, bringing us literally to our knees. Students were suspended for staging an en masse “Tebowing”—the act of falling to one knee, fist to forehead, in prayer. But it all led up to Tim and the Broncos’ climactic dismantling at the hands of the Super Bowl-contending Patriots in the playoffs. Tebow. What if both teams had him in place of their usual starters?

It is engaging, however, to imagine how sporting events could be different, and how single conditions can effect entire outcomes. Madden gives us a way to actualize and visualize these flights of fancy.

Well, it turns out the Patriots might have the better team to support Tebow, as he fared far better with them than with the Giants. He averaged almost 100 more yards on the ground with the Pats, and threw fewer interceptions. The Giants’ Tebow was harangued by the Patriots defense in all the games, averaging over two interceptions per game. Jesus, it would seem, loves the Patriots more.

This is certainly not rigorous science. It is engaging, however, to imagine how sporting events could be different, and how single conditions can effect entire outcomes. Madden gives us a way to actualize and visualize these flights of fancy. More than two decades of iteration on John Madden Football have produced a simulation of considerable depth that forgoes the arcade-like experience of other sports games. Perhaps it’s the influence of former coach and analyst John Madden, the game’s namesake.

Whatever the impetus, peeling away the layers of the design onion that is Madden reveals that delicate balance required of sports simulations—the football foundation must “feel right” in order for all its frills and intricacies to maintain coherence. Madden NFL 12 is by no means a perfect football game. But its core is solid.