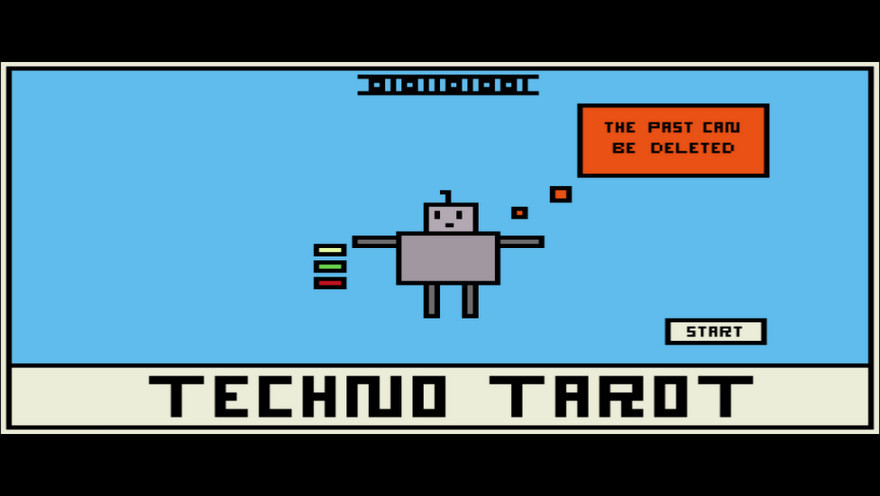 Kara Stone has a history of making games about technology finding its way into places it doesn’t belong. In Super Uplifting Friendship Simulator, a web browser tries its best to offer emotional support in place of an absent friend. Likewise, Sext Adventure pairs you up with a text-bot with which you can exchange steamy messages. Both games make good fun out of the shortcomings of technology operating in human territory, but they also prompt players to reflect on the possibilities of new technology and the reality of its ever-increasing presence in our lives.

Now add to this already intriguing body of work Techno Tarot, an application that delivers cosmic advice and comfort straight to your phone. Released for iOS and Mac in December and this week for Android, Techno Tarot sports a full deck of tarot cards, redesigned in Stone’s characteristically smooth 8-bit style. On starting your reading with the “tarot bot,” you’re asked to press your thumbs on either side of your device’s screen and “attune to technology.” Then, your tarot bot simulates a random draw of three cards—one each for past, present, and future—and a robotic voice provides an interpretation for each individual card.

As a computer program, Techno Tarot draws attention to the simple probability that goes into the shuffle and draw of a tarot reading. But tarot readings don’t have to be about fortune. Like Brian Eno and Peter Schmidt’s Oblique Strategies deck (and the smartphone apps to come years after), they’re just a systematized way to shuffle up and reimagine the circumstances of your life. Techno Tarot makes you thoroughly aware of the pure mathematical chance that determines your reading, but it can’t chase away (nor does it try) the somehow magical effect of hearing your future told. And besides, it’s still fun just pretending that you’re receiving supernatural guidance over your phone’s Wi-Fi connection.

You can find Techno Tarot in the iOS App Store, on Google Play, and at itch.io for Mac. You can also sign up here for the Techno Tarot mailing list to get a weekly card and interpretation sent to your inbox.