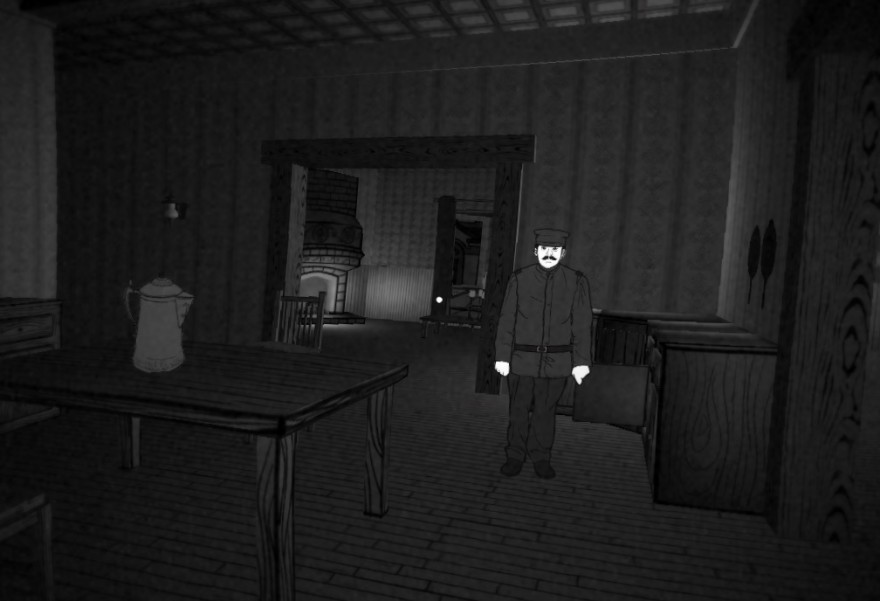 The narrator of Edgar Allan Poe’s short story The Tell-Tale Heart is a classic invention of the author’s macabre fictions; a man who insists to the reader that he is clear of mind—even “wise,” cunning, and “cautious”—while simultaneously recounting the method by which he murdered the old man he shared a house with. The logic that escalates his actions from a sharp hatred of the man’s vulture-like eye to carving up his body above a bathtub is the twisted thoughts of a sick brain, yet he refuses to judge it as such.

Where the story inevitably takes the narrator is to his confession to the police. It’s a manifestation of both his guilt and his madness that leads him begging into the arms of the law. As they check upon his abode, following the next-door neighbor’s report of a shriek in the middle of the night, the police interrogate him, eye up the undisturbed furniture, before relaxing and letting him off.

But, before they head off, the narrator explodes into words the location of the body under the floorboards, for the beating of the old man’s heart was throbbing in his ears until it became unbearable. It’s a “a low, dull, quick sound” that he describes as being so loud as to deafen him, and that he disbelieves the officers cannot hear it, deciding that they choose to ignore it in order to torture his paranoia.

There are a few different perspectives that you could take when adapting The Tell-Tale Heart into a videogame. The most obvious would be to play as the narrator as he murders the old man and evades the cops. You could, perhaps, also play as the cops as they search for the source of the shriek. One Blue Eye Studios decided to go with the first option in their videogame version of The Tell-Tale Heart.

But instead of going through the grisly process of the anticipated murder and stowing of the body, they focus entirely on the moment when the cops arrive at the house. As you open up the game, you’re given a few moments to explore each room of the dim, gas-lit town house. There’s an ornate clock overlooking the dark cobbled streets with a crooked gothic decoration. A fireplace raised on stone; a bottle of fine wine; a knife on a kitchen surface, a paper ticket to a stage show—all can be found. As far as sound goes, it’s mostly creaking doors that punctuate your wander over the wooden boards. Nothing is out of place, it’s homely, and so the only surprising feature of this set-up is the voice that echoes in your head.

fabricate one of a couple of different stories

This voice replaces the beating of the hideous heart as a marker of your (the narrator) growing disturbances. “Why did you do it?” it asks with a haunting ghostliness. What your task eventually becomes is to stave off the madness tormented by your guilt for the murder of the old man. It’s a fitting adaptation as you have to find ways to cover up the growing symptoms of your crime that threaten to force your confession. A game that honors the story it’s based on and offers new insight into the character in a way that feels true to Poe’s style.

The police will arrive after knocking angrily on the door. If you don’t let them in, they’ll enter anyway and you’ll get off to a bad start. The men in blue (presumably—it’s a black-and-white game after all) will inspect the apartment and routinely ask you questions, which gives you the chance to fabricate one of a couple of different stories, or to confess and end the game on the spot as you’re arrested.

If you decide to lie to the cops then you have to make sure your story is consistent otherwise they’ll grow suspicious. Failing this will significantly increase the effects of your lunacy. The walls will start to wobble and warp as if you’re lightheaded. The voice in your head will collide with its own loops, becoming a barely decipherable noise that conquers all hearing. There are other conditions that will increase this maddening effect further and its discovering them and how to overcome them that will be the focus of your replays of the game. Do you hide potential evidence in your pockets or leave it out? It comes down to playing it calm and cool or doing your best to remove any chance of suspicion.

If you let the madness go too far, you’ll end up confessing on the spot, and to a terrifying display. Your vision becomes kaleidoscopic as a circle of men as tall as the room, comprise of the two officers multiplied in number, slowly closes in on you in the game’s most disturbing ending (and most true to canon).

You can download The Tell-Tale Heart for free on Game Jolt.