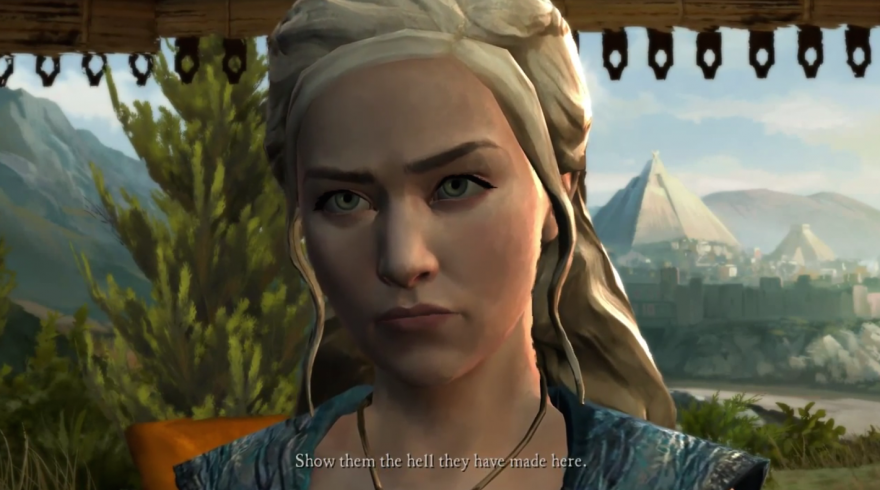 The original conceit of Telltale’s Game of Thrones series was to tell the stories of some of the more minor parties in the land of Westeros, proving that the rapturous density and complexity of George R.R. Martin’s fictional world are just as enthralling from the sidelines as they are from the perspective of Jon Snow or Tyrion Lannister. Going into episode 4, Telltale had largely made good on this approach, introducing us to the Forrester clan as they struggled to maintain a grip on their pride and livelihood: the ironwood forests. This humble motivation is a far cry from those of major characters from the TV show, who aspire to end the slave trade or defend the realm from ice demons and their zombie armies, but the game’s smaller scope always felt like more of a supplement than a competitor to the HBO series anyway. However, with a fresh season of the TV series in full swing, episode 4 of Telltale’s game feels smaller than ever, to the point where the Forrester’s affairs cross over from “minor” to “petty.”

It’s not just the juxtaposition with HBO’s series that diminishes episode 4, though; the strained, awkward interactions with characters and events from the TV show amplify those differences in an unbecoming light. The episode, Sons of Winter, gets off to a strange start after some quick business at The Wall, as Asher Forrester meets with aforementioned emancipator and would-be dragon queen Daenerys Targaryen about renting some of her sellswords. Dany is uncharacteristically hostile and short-tempered in this adaptation, and straight up tells you that the well-being of House Forrester isn’t very important. The seed has been planted—what if she’s right? It’s a line that sets a tone for the rest of the episode, widening the game’s narrower focus to a more macro level where, presumably, the successes and failures of the Forresters bear little to no consequence on the main plot of the Song of Ice and Fire saga.

Dany is uncharacteristically hostile and short-tempered

For a game that stresses the importance of each small decision you make as altering the narrative going forward, lowering the stakes of those decisions cuts off any propulsive tension at the knees. And it’s not just Dany’s remarks, either—the seemingly refreshing string of small victories for the Forresters in this episode actually settles the pace further and leaves the impression that things are kind of OK, relatively speaking. One hopes this is a false lead that Telltale will cash in on the next episode (only 2 left!), but, as for Sons of Winter, any lingering insecurities are planted firmly in the background. And seeing as the episode’s “cliffhanger” ending is its weakest yet, there’s not much excitement to cling to in the meantime.

After Danaerys and Asher’s meeting, the episode takes us back to The Wall, where the heroic Jon Snow pops his head in on the eve of poor Gared getting his chopped off, offering faint, passing support before heading out on his own Actual Important Business. Like Dany, this adaptation is also uncharacteristic of Snow, who usually makes a more sincere attempt to right any wrong that crosses his path. Lucky for Gared, he escapes execution anyway and sneaks into the wild to find the fabled North Grove, whose true value is still unknown. In doing so, Gared and his companion(s) forsake their Night’s Watch vows, which will put them back on the chopping block should any pursuers catch them. This is a shame: the most moving scene in the previous episode (and maybe the whole series) featured Gared kneeling and pledging his loyalty to the ancient order, chanting the sacred words line by line in time with players’ button presses. Here’s hoping his sub-Bran Stark quest through the northern wilderness ends up being worth the sacrifice.

Gared and his companion(s) forsake their Night’s Watch vows

Over at Forrester central, Ironwrath, the injured Lord Rodrik at long last gets some payback on the usurping overlord Gryff Whitehill with an assist from new perma-smirking face, Arthur Glenmore. This sets up a potential peace-brokering meeting at the Whitehill stronghold where Rodrik finally has a bargaining chip in the imprisoned Gryff to negotiate the release of his kid brother Ryon. While no characters from the TV show make an appearance here, the set dressing of the infamous surprise bloodbath, the Red Wedding, is in full effect. As a reference, it’s pretty heavy-handed, driven home by the fact that you’re given a dialogue option of calling out the scenario as such. I won’t spoil what transpires, but if read as an example of how the Whitehills are creatively bankrupt and steal others’ ideas, the same way they have proven incompetent stewards of the ironwood forests, the house’s blatant implementation of Red Wedding scare tactics feels about right.

Meanwhile, Mira Forrester’s bit in King’s Landing is a dialogue-heavy slog that ends in almost the same place it begins. There’s a coronation party and she’s busy going around eavesdropping on conversations about government contracting. Someone get me a flagon of milk of the poppy before I hurl myself into Blackwater Bay. With two episodes left this season, they need to make the Forresters affairs matter again if they intend to craft a finale worthy of the Game of Thrones banner.