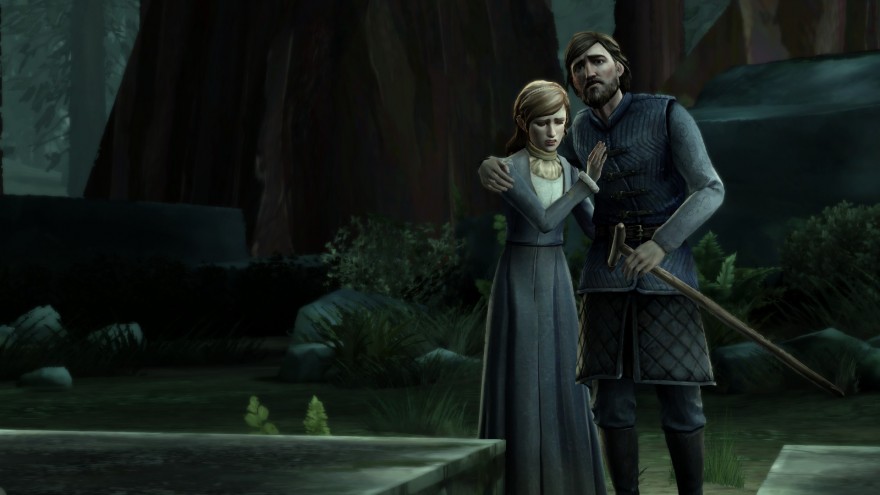 “Why do the gods continue to shit on this house?” asks Sir Royland, shaking his fist up at the sky and its oily, vague shades of blue. It’s a question I’ve asked myself again and again throughout this series, and one Telltale has avoided answering far too many times.

The fifth and penultimate episode of Telltale’s Game of Thrones, “A Nest of Vipers” (the most irrelevant title for an episode to date), begins where the last one left off: with Ramsay Snow getting up to his usual comicbook villain antics of making people he doesn’t care about miserable for funsies. A threat of rape here, a quick flaying there. Like the past few episodes, most of the fifth takes the worst parts of the past season—gruesome violence and violation for the sake of gruesome violence and violation—while ignoring its best parts—like choices that matter both for the character’s interpersonal relationships and the story as a whole.

I mean, even the comicbook supervillain of this story agrees that the constant deluge of meaningless torture has gotten pretty boring. In the opening scene, Ramsay is unceremoniously escorted out of the narrative like a Grey’s Anatomy actor asked to co-star in an upcoming Garry Marshall movie. After declaring the Forresters and Whitehills too insignificant for even his arguably useless presence, he tells the feuding houses to sort it out themselves. He’s got better things to do, and for the first time I find myself agreeing with Ramsay Fucking Snow.

This is only one of the several times the game feels the need to remind you how little you matter in the grand scheme of things. If you try to honorably sacrifice yourself as Rodrik to save a friend from torture, for example, Ramsay mutters, “Why bother? You’re nearly a corpse already.” It’s a comment that both negates your dialogue choice and Rodrik’s significance in the story in one fell swoop.

I find myself agreeing with Ramsay Fucking Snow

The only answer Telltale gives to Sir Royland’s pertinent question about why the gods choose to repeatedly spew diarrhea all over House Forrester is this: because they’re the Starks, only without power, intrigue, or well-grounded characterization. The Forrester narrative so far feels like what would have happened if George R.R. Martin followed up the Red Wedding with a resurrection scene, in which the Starks came back as politically-pointless zombies to forever roam Westeros bemoaning their past greatness.

In this episode, Rodrik bears striking resemblance to Robb Stark’s reanimated and mutilated corpse shuffling aimlessly around the Twins looking for his head like a decapitated chicken. When the episode later finds him in bed with the woman he loves, making promises about their perfect future in the throes of passion, a sense of déjà vu crept over me and I decided to start making my peace with his death now rather than later.

And sure enough, like clockwork, the final moment of the episode finds Rodrik in dire straits, as the player must choose to save a man with an army, or a man with an (at-best) feeble love story. I spent all of half a second deliberating.

In Telltale’s defense, the final story beat certainly proved the most worthwhile of the episode, if not the series as a whole. Up until now, Telltale have done their best to make the player’s choices feel like they matter in a political schema that simply does not have room for either the player or the Forresters. But it’s not just that the Forresters don’t matter in the GoT world. Telltale has fundamentally done a bad job of tailoring their narrative to anything other than what the script requires of them to move forward. And while The Walking Dead could flawlessly get away with doing this by underpinning your choices with moral rather than tactical consequences, Game of Thrones is a different kind of beast.

I chose to leave my controller and get snacks instead

The final choice between Rodrik and Asher was successful because it at least addresses the player as a storyteller rather than a moral entity. In a fictional world where lying and manipulation are the accepted survival tactics, I find myself much less interested in a test of my honesty than a test of my narrative impulses. At one point, the script actually forces you to align yourself with Cersei and turn against Tyrion. The central “choice” you make in the scene that follows it is whether to commit to the lie or come clean. I chose to leave my controller and get snacks instead, and watched my character’s stony silence have less impact on the scene than the inanimate bottle of wine in Tyrion’s hand. Again and again, Telltale attempts to paint the player into a moral corner that just feels irrelevant to the world and inconsistent with the fictional rules.

The Starks are dead, both as a concept and a narrative arc. Throughout the early seasons and books, they served as the “good guys,” allowing readers to pin their traditional fantasy hopes on a happy ending where everyone gets what they deserve. Their graphic and seemingly untimely deaths were a message from George R. R. Martin, spelled out in blood: this is not that kind of story.

Either Telltale didn’t get the message, or they’re choosing to go over it again in case the mutilated corpses of everyone’s favorite HBO actors didn’t do the job.