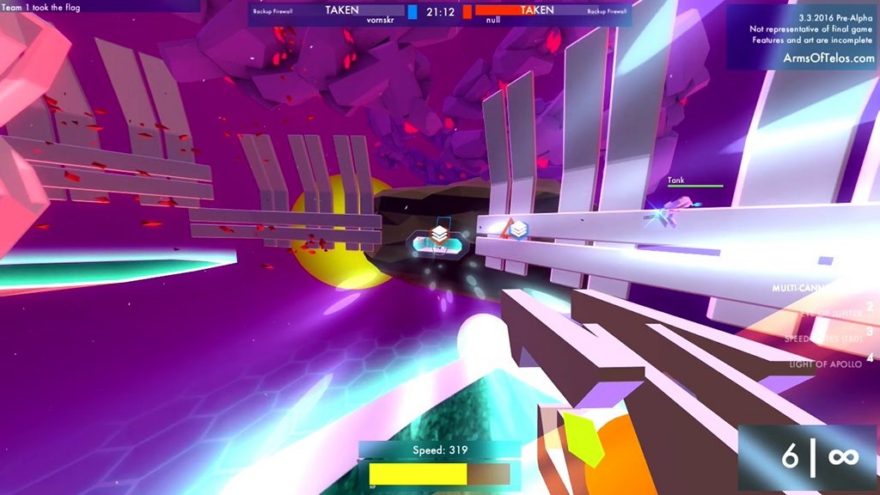 There’s an almost innately satisfying thrill in going fast, in moving beyond the limits of our biology. You see it in the one-upmanship of supercar speed specs, touting how rapidly the newest model can roar from 0 to 60 and push past the 200mph mark. In the excitement of plummeting towards the earth while skydiving or speeding through open air on a zipline, or just the joy of driving with the convertible top down and the wind whipping through your hair. In the rise of acrobatic activities like parkour and free-running, how they allowed one to ignore the typical walkways and move through the urban landscape with fluidity and celerity. Or in the elegant flight of a wingsuited individual as they caress cliff faces and rocket through narrow mountain passes.

We like speed, breaking the barriers of movement, and in the virtual world, games have only followed suit. Descent (1995) let you freely fly through its claustrophobic corridors. Quake (1996) broke the mold with moves like rocket-jumping—no longer were you bound to the confines of game physics and movement, but could subvert and escape those limits through skill. Mirror’s Edge (2008) injected the first-person perspective with the skillful traversal of parkour, while Assassin’s Creed (2007) turned the environment itself into an extension of your movement as you scaled historic architecture.

The upcoming competitive shooter Arms of Telos continues that trend, by combining myriad movement types into a dynamic traversal system that can shift from swinging through sci-fi landscapes like a certain arachnid hero to barreling through space with the agility of Descent’s crafts.

“The biggest thing that sets it apart is the movement,” explains one-man team Justin Pierce. “You pilot a very agile spidermech in zero gravity with pockets of gravity in indoor areas and special magnetic surfaces, but you can also get going really fast to where it’s almost a racing hybrid.” Arms of Telos isn’t confined to a single plane of movement, but rather changes it depending on the player’s location. Within a structure found on one of the game’s vibrantly-colored low-poly arenas, gravity plants your feet on a surface, be it a wall or floor or ceiling thanks to magnetized tiles. But in the zero-g space outside, thrusters and a grappling tether guide your movements, divided between rocketing through space at incredible speed and snagging structures with your hook to turn your momentum into deft swings.

Within the framework of such movement-focused gameplay, Pierce plans to create a skillful strategic arena shooter that actually takes more inspirations from racing games than perhaps its first-person shooter brethren. In a blog post explaining the challenges of refining aiming and shooting in a game with extremely fast movement, he states how “it’s similar to tuning your gear ratios in a racing game. Some gear ratios may be better suited for different tracks, but it also comes down to personal preference.

Allowing players to tune them to their own preferences will hopefully give them a better sense of ownership over their experience.” Those preferences revolve around an exotic array of weapons and items that would allow players to design their own fast-paced tactics, ranging from a teleporting blade for the melee-inclined to deployable speed gates and shields.

Arms of Telos is expected to release on PC, Mac, and Linux. Visit the game’s website and TIGSource devlog for more details and GIFs.