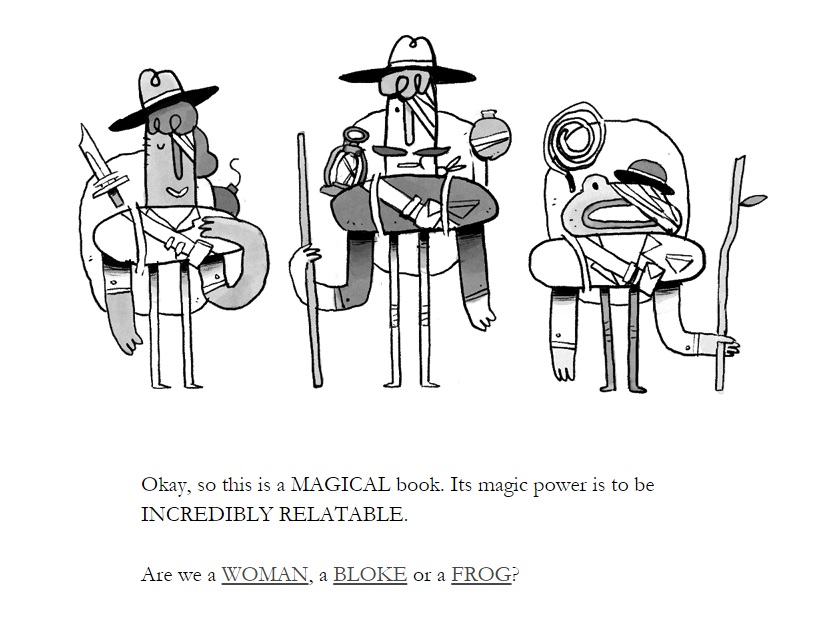 Crows Crows Crows, the studio created by William Pugh (co-developer on 2013’s The Stanley Parable), has launched their second game—a Twine adventure called The Temple of No.

The game is relatively short and comedic, similar in that regard to the studio’s previous short, narrative title, Dr. Langeskov, the Tiger, and the Terribly Cursed Emerald: A Whirlwind Heist (a name you are sure to have to Google to remember.) Made in the Twine engine, it’s a simple interactive narrative experience where you go on an adventure as either a woman, a “bloke,” or a frog.

“Have you ever played a good game made in Twine?”

The Temple of No is loaded with references, both to Geox Shoes (the Shoes That Breathe, evidently) and British comedian Spike Milligan, to name a couple. It is also rather referential to other Twine games and the medium in general. Alongside the assertion that no one has made a game of Snake (1998) in Twine—which seems unlikely since James Shasha made a version of Flappy Bird (2013) in Twine—you have references to perhaps the most well-known Twine title: Depression Quest (2013).

“Have you ever played a good game made in Twine? Like, one that’s actually good—not just ‘good for a twine game’?” The Temple of No asks. Whether or not Crows Crows Crows views Twine with anything approaching fondness is up for debate, though it certainly feels like a “no.” Either that, or they’re riffing on the apprehension many people into videogames have towards Twine and, to a greater extent, interactive fiction in general. That’s up for you to ponder.

In the meantime, you can play through this humorous little tale and enjoy what is becoming the studio’s signature, well-written humor. Dominik Johan does a bang-up job of matching that silliness with quaint, squiggly illustrations too.