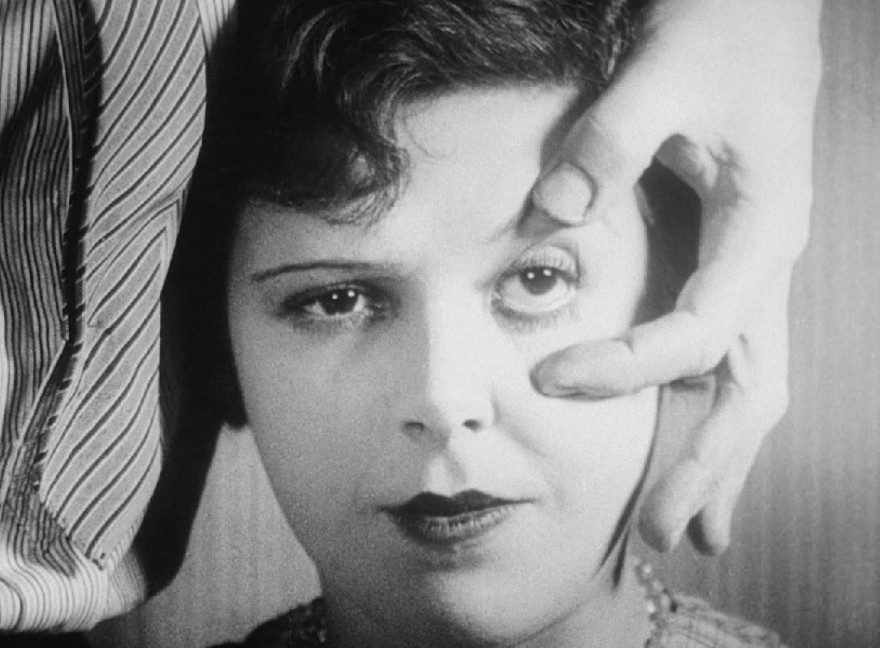 My first viewing of Luis Buñuel and Salvador Dali’s 1929 surrealist film Un Chien Andalou (you can watch it all here) is the only time I’ve ever had a violent reaction to a film.

Its infamous prologue—”Il etait une fois” (Once upon a time)—features Buñuel himself, sharpening a razor, testing its blade on his thumbnail, and then stepping out onto a moonlit balcony. Buñuel looks up to the moon, puffing on a cigar out the side of his mouth, and sees a thin cloud about to perform a lunar incision. This is cross-cut with a view of an emotionless woman sat on a chair who has her eye pried open by Buñuel’s thumb and forefinger, he then moves the blade towards her exposed eyeball.

“The goal is to give [the] player this short and strong experience of cutting [an] eye.”

Then it comes: the cloud cuts across the moon, followed by an extreme close-up of the woman’s eye (actually a dead calf’s eye) being grotesquely sliced open by Buñuel’s razor. I watched in horror, physically pushing myself up and back in my chair, mouth agape, as the vitreous humour from this impossibly calm woman’s eye effused out in a disgusting blob. Buñuel’s attack of this woman’s eye is one also launched upon its viewer’s eyes; you don’t expect such raw footage (especially from a 1929 film) and it sets-up the irrational and startling dream logic of what comes after it.

Just as quickly, it’s all over, and a bemusing title card flashes up, “Huit ans apres” (Eighty years later), leading you into the remaining 14 minutes of one of surrealist cinema’s finest works. Now, two people who met at a local game jam in , have turned Buñuel’s notorious prologue into a first-person installation inside a videogame.

Aptly called The Tender Cut, Ilya and Yulia say that their videogame invites players to “dive into [its] surreal atmosphere and to share [the] movie character’s experience.” Yes, you’ll apparently be experiencing the perspective of Buñuel’s ocular-assault persona in Un Chien Andalou.

The idea sprouted from the theme of the game jam Ilya and Yulia participated in: Phobias. Doing some research, they happened across the prologue of Un Chien Andalou and knew that, for most people, the sight of an eye being sliced is creepy and terrifying, so it wholly satisfied their criteria.

“It was important to show the moment of cutting and it was obvious that it [would] be the central moment of the game. It is [a] concentrated experience, but just one second of gameplay,” Ilya and Yulia told me.

“[it] was not possible to continue playing because of disgust.”

Their main task was to build a framework that expanded upon that one concentrated moment at the center of their game. Upon reviewing the scene a number of times, it was decided that the eye-slicing would be contextualized in the game as a fantasy born inside Buñuel’s head as he gazes up at the moon. “The goal is to give [the] player this short and strong experience of cutting [an] eye. The rest of the game is background for that,” Ilya and Yulia said.

So you can expect a build up to the action of taking a razor to a woman’s eye accompanied by a “soft and mystical” surreal atmosphere. The room that the film’s prologue takes place in has been recreated as accurately as the pair could manage; with a single chair, the blade on a wooden end table, and the moonlit balcony visible behind a glass door. You can interact with these objects inside the game’s single room, playing as “some kind of extension of the movie’s character,” according to Ilya and Yulia.

The slight distance described here—an “extension” of the character rather than actually being him—is necessary. The whole design of the scene, it’s brevity and violent absurdity, is aligned with the unexplained logic that is integral to those devoted to the ideas in the Surrealist Manifesto, of our beautiful and pernicious dreams. To have us play as Buñuel’s character is to give us a chance to change the scene, to question our actions, rather than react to it from a different and potentially more shocking point of view.

As the game jam The Tender Cut was made for was only a week long, the game is short. No matter, as it seems to achieve what it was made to do: incite a reaction in its players. “Some people who played the game said it was really scary. For some of them, [it] was not possible to continue playing because of disgust. But we do not want to scare players. It is [the] player’s decision how to react [to] the game,” said Ilya and Yulia.

Having already experienced a violent reaction to Un Chien Andalou, I think I’ll manage to remain calm upon playing The Tender Cut, but I’d love for that to not be the case. I should be able to find out soon as, currently, Ilya and Yulia are fixing bugs and improving the visuals of The Tender Cut in preparation for a release in November. Prepare yourself.

Check out The Tender Cut’s official website and its Game Jolt page for more information and screenshots.