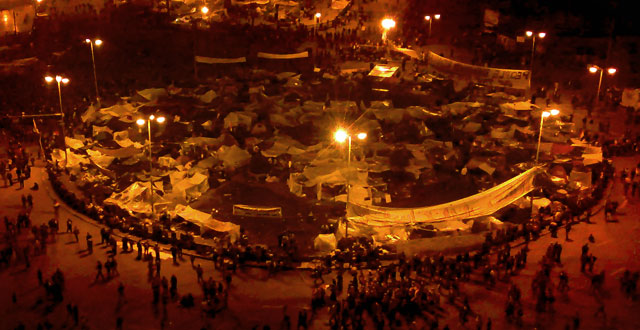 Tent City, Freedom Square — Transmogrified oil barrels are used for makeshift, sand-riddled sweet potato machines. Hand-drawn anti-Semitic, anti-American, and anti-regime posters are stapled to translucent tarps that are erected around the square, guarding political conversations within. The smell of rotted pollutants hangs above the square, and the greenest grass Cairo once had to offer is now stomped to a dusty pulp, the kind you find when you kick over dead earth. Trust is a pre-revolution ideology in Tent City.

Tahrir Square, the epicenter of the revolution in Egypt, means “Freedom Square” in Arabic. And since my January deployment in Cairo, just before the self-immolations of seven Egyptian laborers that would later prove the catalyst for the ouster of draconian president Hosni Mubarak, Tahrir has transformed into the ganglion of an ongoing turf war. My foreign correspondence to the Western press has revolved around the dynamism of the Square, so it makes sense that I am there again, amidst the protesters and amidst the proverbial Sledge: I’m using a Telnet iPhone app called pTerm to remotely connect to a text-based, virtual world called HellMOO. Obviously, the cannibalism I experience in HellMOO is nothing like the tumult of the Egyptian liberation; but that doesn’t stop the appearance of eerie congruencies.

Slagtown, Freedom City — The broken pavement picks its way between large scum-filled craters. The dying rays of the setting sun dazzle your eyes. A light wind blows. To the south you can see rusted industrial buildings and empty lots filled with twisted heaps of debris. Black smoke belches from the recycling center to the west. A suicide-booth stands on the sidewalk, bearing a cheerful smiley-face logo.

This is the terrifying backbone of HellMOO, an irreverent multi-user dungeon (MUD) conveyed, solely, through colorful text. The digital world is born from vestiges that predate the conflict that tore its society apart. While users struggle to survive in acrid conditions, the populace is wrought with corruption. The game attempts to elucidate the fear of a culture thrust into disarray.

At the time Sister Agnes and I were the only two near the pyre. I was trying to figure out the commands while she, a non-player character, was coming to my aid. Sledge proceeded to “face pummel” me with his “meaty member” and then eat Agnes’ brains.

MUDs work like this. I wind my way through a labyrinthine system of rooms and streets, using commands like “e” for east or “n” for north on a map, and I’m greeted with a written synopsis of action along every turn. In the 1970s, cave enthusiast Will Crowther engendered the first text-based description in the seminal computer role-playing game, Colossal Cave Adventure. “There is a lamp in a dark room” has since become a cult meme among text-based hobbyists. Although Colossal Cave Adventure, at that time, wasn’t multiplayer, it created a watershed for massive text-based games to follow.

HellMOO, which was founded in 2003, is one of them. The game allows users to connect through the archaic network protocol Telnet, or the Terminal client on a Mac. In a typical MUD, like Colossal Cave Adventure, I can utilize a number of typed commands—such as “get lamp,” to add it to my inventory; or “use lamp,” to turn on the lamp and illuminate the chamber. HellMOO uses a similar engine—but instead of “get lamp,” I find myself typing things like “get needle” or “fuck corpse.” I build up my skills by killing things, and eventually 0wn everyone else, like in any massively multiplayer online game. Except I, personally, don’t 0wn anyone.

HellMOO generates a demon veracity that is otherwise unimagined in pixels. In the same way that a romance novel is somehow more palpable and sumptuous than a simple silver-screen lay, HellMOO is the ultimate provocateur. Think the anarchic mutation of a test-tube baby with the racism of Neo-Nazi recruiter-game, Ethnic Cleansing; the horniness of Leisure Suit Larry; the irony of Conker’s Bad Fur Day; and the violence of Gears of War. There is a “fetish” skill; there is a “fuck” skill; and when your “focus” skill isn’t well-enough tuned, you have “Down’s syndrome.” All in text, detailed and visceral. HellMOO is a humanitarian’s worst nightmare. The game is so player-versus-player-heavy that the only chance of survival is through strength in numbers. This is something I learned the hard way.

I started a spry, innocent orphan just trying to survive in Slagtown, when “Sledge”—a nihilistic prick on a Harley, dual-wielding two sawed-offs—rolled into the altar room and raped the congregation. At the time Sister Agnes and I were the only two near the pyre. I was trying to figure out the commands while she, a non-player character, was coming to my aid. Sledge proceeded to “face pummel” me with his “meaty member” and then eat Agnes’ brains. Oh yeah, and he was wearing a Def Leppard shirt. I remembered that vividly when he removed my head and used the shirt as a bindle to carry away my decapitated skull. The rapidly scrolling essay detailing the rapine assault of my character proved I had much to learn about the HellMOO world.

Such is the depraved reality of HellMOO, but it isn’t anything new. You might remember Julian Dibbell’s formative 1993 article entitled “A Rape in Cyberspace,” which chronicled a similar sexual situation involving a voodoo doll in the MUD LambdaMOO. What is new, however, is how and where I am playing HellMOO.

Tent City, in recent days, has become its own self-governed capsule, an erected micro-metropolis of the Egyptian citizenry. Plain-clothed denizens keep a constant vigil over the slapdash encampment, trying to sift the loyalists from the n00bs, so to speak. And as I amble through the city of tattered cloth pitched upon splintered shards of teak simultaneously connected to another a city, not my own, it is clear to onlookers, virtual and not, that I am the alien here.

Back in HellMOO, user Siloscud is saying, “m0r3 wr5713 L3ss v&.” The “v&” stands for the act of getting “party vanned,” or taken away by officials; and “m0r3 wr5713” is the equivalent to “pushing forward.” The statement is a virtual battle cry.

Tent City is also flooded with codified language—things like “a7a 3askari” or “shit, soldiers” are murmured between camps. The “7” and the “3” stand for Arabic sounds we don’t have in English. This juxtaposition of numeric and Latin script languages, intertwined, produces a new cryptic channel of communication that has me in a transient state of awe.

At any given time there are usually 60 to 130 players on HellMOO, and 25 admins online. That number of pundits or leaders around Tahrir, which has begun to install chicken wire around its perimeter, wouldn’t be far off either. Both societies provide amateur doctors, as well as civilian-orchestrated security checkpoints. In addition, there is a pervasive anxiety in Tahrir, an imperative to search and destroy the duplicity that runs rampant after the ouster. Freedom Square’s worst nightmare might be pro-regime plain-clothed thugs infiltrating the cordon—this small cordon that hundreds have died for. And a foreigner like myself? Well, that is all the more suspect.

Still exploring HellMOO, where wall-mounted street cameras relay my every move to virtual invigilators in ivory towers, I turn on the in-game radio, listening for announcements. My iPhone blasts some sort of jungle trance, perfect for a schlock slaughter film; and someone asks me for my ID. Egyptians swarm until one prods me with his cane. “walla3a,” He says. “Lighter.” Just days ago several orators were removed from Tent City for inciting anti-reform rhetoric, so it is no wonder that many Egyptians, having staked out the camp for weeks, do not welcome unfamiliar faces with open arms. But just as tensions between the protesters and me seem to intensify, I am saved by the din and grain of the mosque, prayer time, megaphones. The intonations crackle and slowly the tensions are diffused. The protesters line up their mats towards Mecca and grace the floor. I step over a line of bowing Muslims, partially get caught on the chicken wire, and disconnect from Freedom City. In-game, I had already died anyway.

And as for Tahrir, the Freedom Square? It was destroyed the next day.