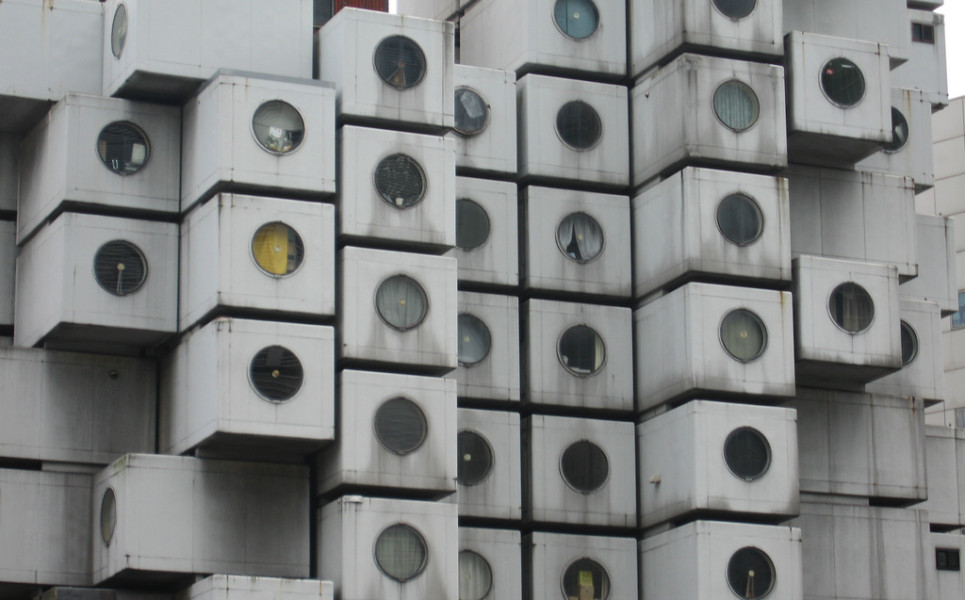 French architectural genius Axel de Stampa created a dancing ode to Tetris (1984) with the 2014 debut of his gif art gallery Architecture Animée. The introductory image sees large Tetris piece-shaped buildings fall from a blue sky to interlock themselves with the grounded structures below. The result is a series of architectural tetrominoes that reveal an understanding of the choreography and composition of each great city. But this is more than a videogame reference, as it alludes to the need for movement in the skyscrapers and city blocks of the urban utopias of the future. There is a growing demand for spatially efficient and moveable office spaces and apartments that could potentially reduce urban congestion, while also allowing cities to grow outwards and perhaps even inwards, onto themselves. With his gallery, Stampa realizes the dream of changeable, pieceable, and transformative architectural units that the design concepts of the future may move towards.

This is not a new idea. Kisho Kurokawa initiated his version of the architectural future with the Nakagin Capsule Tower, which was completed in 1972 and consists of 140 concrete, liveable capsules fabricated into the backbone of the tower itself. The crux of the concept is that the capsules can be moved out of the tower by the owners at any time and installed at a different part of the sprawling metropolis that is Tokyo (it’s not too easy, though, given that a crane is needed to lift each one out from top-to-bottom). Kurokawa’s brainchild was still very much ahead of his time—today’s architectural norms haven’t yet caught up with his idealistic perspective on spatially efficient approaches to architecture. The story of the Nakagin Capsule Tower remains something of a tragedy, a forsaken approach to urban growth and development. Kurokawa passed away in 2007, passionately protesting the Nakagin Capsule Tower owners’ collective decision to demolish the building, which is situated in the celebrated Ginza district where real-estate is always in high demand and quite expensive. Fortunately, the advent of the financial crisis prevented any such destruction and the tower was saved, though only half of the capsules are actually used today due to the derelict condition of the apartments themselves.

It is clear that tomorrow’s progressive architects and designers must continue to find innovative ways to create spatially efficient living spaces and offices without compromising on the distinct character of each space, as demanded by the owner. Architect Julien De Smedt from PLOT puts it perfectly, “We live in a world where individualism has larger resonance than previously. Diversity is well accepted, even desired. People who live in a housing complex of 221 apartments should have the same access to individuality.” PLOT has readily embraced the concept of providing architectural individuality rather than following the masses with stereotypically suburban cookie-cutter ideas. This is shown in the VM Houses that De Smedt and his partner, Bjarke Ingels, created using a series of permutations of interlocking tetromino spatial units. It turned out to be the final concept for their curious Copenhagen apartment complex, which actually won the Forum Prize as the best new building in Scandinavia. We see here the architecture of the future once again turning to Tetris for its template.


An environmentally-friendly approach towards modern architecture would add yet another layer of complexity to futuristic pieces. David Fisher’s company aims to create rotating towers that use self-sustenance methods—buildings that are completely powered by wind and solar energy that react dynamically with their environment. Even Ayn Rand couldn’t have conceived of such new-age creations as she was writing in favor of modern, unconventional architecture in her 1943 novel The Fountainhead. What’s interesting about David Fisher’s approach is that it promotes individuality by embracing movement, allowing the inhabitants of each living space to experience a complete 360-degree perspective of their surroundings. Compare this to the designs of De Smedt and Ingels, who also regard their permutations and combinations of tetrominoes as creating distinctive, individualistic living spaces, yet see them realized as part of a single collective unit. The major difference is that the Tetris pieces It might be argued that their Tetris-based concept is the definitive metaphor of a socialist approach towards architecture, seeking out an equalizing factor.

This should come as no surprise given that Tetris is is a product of the Soviet Union, designed by Alexy Pazhitnov and programmed by Vadim Gerasimov in 1984. It has long been theorized that a communist concept underlies the game’s single task. After all, it’s a puzzle game about taking a variety of distinct shapes and melding them into one uniform whole. Everything individual is removed in favor of all being equal. And yet the spatial manipulation inherent to Tetris has spurred on many other modern architects to create structures that don’t fall in line with this political parallel. There’s the Tetris House concept, for instance, created by Dutch firm Universe Architecture. This concept also uses prefabricated movable blocks as living spaces, allowing entire homes to be transformed and melded together into apartments. It allows the owner to redefine the contours and the identity of their living space at will—it entirely supports individuality. It also suggest that this age will perhaps be one where a lifestyle of spatial variety will finally be embraced, maybe even becoming commonplace. Perhaps Kurokawa’s decades-old decomposing dream of absolute prefabrication will finally be re-envisioned by today’s more avant garde architects who will dare to design something new and different, perhaps even verging on radical.

There is mathematical proof that states almost all Tetris games must end. An infinite game of Tetris is very hard to attain, no matter how great the player’s gaming skills or strategy, but not impossible. This concept could be translated in terms of the architectural world as well. While infinite Tetris-concept skyscrapers might be physically impossible to realize, perhaps mathematical algorithms and modern data analytics can help construct the right permutations and combinations needed to create dense layouts of spatial units that could cater to large, growing populations. How will tomorrow’s architecture capture all of humanity’s lifestyle choices? What will the London or New York City or Tokyo of 3016 look like? The result could be a series of distinct concrete jungles unlike any other; skylines blazing with curves and tetrominoes and dancing buildings and twisting towers synchronized to sublime metropolitan choreographies. Kurokawa would be proud of such a sight.