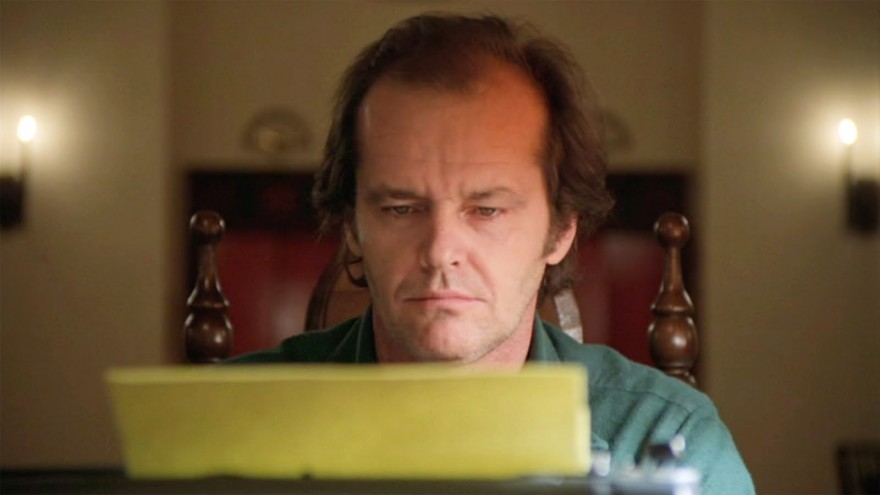 Jack Torrance. Loving father. Adoring husband. Friendly handyman. Driven absolutely psychotic by either a supreme and enduring boredom or the whispers of murderous ghosts (you decide!). What happened Jack? At the start of The Shining he’s all smiles and strolls as he accepts the position of janitor during the winter months at the Overlook Hotel. By the end he’s axing down one of the many bathroom doors, shoving his grinning face among the fresh splinters, famously proclaiming “Heeeere’s Johnny!”

Do you remember the turning point? The moment it was confirmed for Wendy that her husband is deeply disturbed and both her life and her son’s was in grave danger? Sure you do. She timidly enters Jack’s work space—where he had previously had a tantrum and told her to “get the fuck out”—both her hands pulling a baseball bat to her chest, a woman of half-panicked breaths and wide eyes. “Jack,” she calls out nervously. But he’s not around. She approaches what has now become his most precious cargo in the entirety of the hotel: his typewriter.

This is where he has supposedly been working on a novel to pass the time. Before, we learned that this was something that Jack has wanted to do for a while. And now, isolated in this hotel with his family, he’s had the chance to tap one out. Or, he would if Wendy would stop coming in with freshly-made sandwiches and her infectious merriment, goddammit. But Jack hasn’t been writing a novel. What Wendy discovers as she leafs through the pages is closer to a projection of Jack’s twisted psyche.

It’s this scene that design student Juan David Gómez takes as inspiration for his automatic text generator “Psychotic Writer.” As with Jack, it takes the sentence “All work and no play makes Jack a dull boy” and then repeats it down the pages of an ebook, almost dancing as it makes shapes out of the the text as if it were a piece of concrete poetry. All you have to do is click and the text is randomly produced for you, chapters inserted every now and then, and once you’re finished you simply click once more and it’s turned into a PDF that you can send to anyone you’d like.

But what message would you be sending with this unusual novel? Hm, probably not one that’s going to make a good impression, put it that way. To return to that scene in The Shining, it’s not so much the words “All work and no play makes Jack a dull boy” that disturbs Wendy, but the way they’re arranged on the page, and with such commitment to frequency—at first a whole page, then another, which sits on an entire stack of papers imprinted with that single sentence. To start, the sentences are neatly aligned as a box on the page; an orderly disposition. But then Jack adds indented paragraphs at regular intervals. A couple of pages on and typos appear as the syntax morphs into revealing shapes.

The text becomes sharp triangles, the sentences bunch up and then spread apart, they overlap each other, then all text justification is lost as the typed volume gains a saw-toothed edge. As Wendy flicks through the pages we see Jack’s typing become more erratic and more experimental as he figures out new ways to present the repeated sentence in the same way a serial killer might play with the organs of a victim with a knife point. That’s, er, probably not an impression you want to give to anyone really, but feel free to create your own Jack Torrance psycho novel and send it to your loved ones, you nasty piece of work.