When Sony kicked off their E3 press conference this year by announcing a new God of War game, it confirmed rumors that Kratos would be taking his God-slaying talents North to Scandinavia. It was later revealed that developer Santa Monica Studio had also considered Ancient Egypt as a possible setting for the next act in Kratos’s story. The game’s creative director, Cory Barlog, said in a roundtable interview with Eurogamer that, “for me, as I looked at both [Egyptian and Norse mythology], Egyptian mythology is about the pharaohs as embodiments of the gods on Earth and there’s a lot more about civilization—it’s less isolated, less barren. I think at this time, we really wanted to focus on Kratos. Having too much around distracts from that central theme of a stranger in a strange land.”

There is a lot of subtext to unpack in Barlog’s statement. Taking his assessment of “pharaohs as embodiments of the gods” it would seem that a God of War set in Egypt would task players with assassinating human Gods. This inherent connection to the actual people of Egypt, not just their pantheon, could present a bit of a problem. Firstly, the idea of a white Kratos essentially invading a land that belongs to people of color, where he proceeds to slaughter them and their entire belief system is, to say the least, uncomfortable. In fact, it would likely raise the same concerns as Resident Evil 5 (2009) did, in which a white man trudges around a fictional African country shooting the natives—who are infected by a vicious parasite. You could argue that the same applies to God of War’s treatment of the Norse, but the racial undertones are not as prevalent in such a case, and Barlog has made clear that the game takes place before Norse civilization has properly begun to form, thereby eliminating potential bystanders.

Game studios are right to be wary of Egypt

This is a convenient workaround for Barlog and his team to adopt and it’s one that wouldn’t have been as available with the initially proposed Egyptian setting. Game studios are right to be wary of Egypt even if it is a shame that it’s overlooked. You only need to glance sideways to see the stigma that Egypt has picked up as a setting for fiction as of late due to the wildly inappropriate and offensive Hollywood films Exodus: Gods and Kings (2014) and this year’s Gods of Egypt, in which white actors were cast to play Egyptians. That’s nothing too unusual for Hollywood, but it has come under increased racial scrutiny due to Exodus director Ridley Scott’s crass remarks on the subject: “I can’t mount a film of this budget, where I have to rely on tax rebates in Spain, and say that my lead actor is Mohammad so-and-so from such-and-such.” In addition to the aforementioned movies set in Egypt, recent examples of whitewashing in movies include Emma Stone being cast as a character of Chinese and Hawaiian descent in 2015’s Aloha. 2010 saw Jake Gyllenhaal infamously cast as the protagonist in the Prince of Persia movie, while this year’s reveal that Scarlett Johansson would be playing the Japanese protagonist in the upcoming Ghost in the Shell movie caused quite the internet uproar.

Whitewashing doesn’t only exist when white actors are cast to play people of color, but also when movies about people of color are centered around a white actor. The Last Samurai (2003), Dances With Wolves (1990), and The Help (2011) are all examples of movies about white people entering and integrating themselves into communities of color. This type of whitewashing can easily affect videogames as well. The aforementioned Resident Evil 5 (2009) was guilty of it, so too was Far Cry 2 (2008) and Far Cry 3 (2012) to name but a few. But here’s the big difference: Hollywood can argue that it looks to cast the most popular actors in its movies, nearly all of which are white, while videogames are complete fabrications built from the ground up that need not worry about the ethnicity of real life actors nor a pitching process like the one Scott references. While making a game about a white protagonist in a land belonging to people of color is ill-advised, making a game about a white protagonist slaughtering people of color on their own land is best avoided altogether. And it can quite easily be avoided.

To flip the argument for a second, while there are certainly reasons to avoid Ancient Egypt, there are also myriad reasons to embrace Norse mythology, as Sony Santa Monica has done. Thanks in large part to the Marvel Thor movies, large audiences are innately familiar with Norse pagan myth. Characters like Thor, Loki, and Odin are at least, if not more, recognizable than Zeus, Poseidon, and Ares. Not to mention the high number of fantasy videogames set in locations derived from Scandinavia and embedded in Norse culture—The Elder Scrolls V: Skyrim (2011), the Neverwinter Nights series, and World of Warcraft (2004) to name some of the most popular. The pop culture zeitgeist has embraced Norse mythology so there’s already an existing appeal to bank on. Egyptian myth, while probably the third most widely-known pagan pantheon, still remains somewhat esoteric, at least when you speak in terms of mass audiences. However, the biggest reason to embrace Norse mythology is probably the natural environment the region of Scandinavia presents.

Consider that the original God of War games relied heavily on massive architectural monuments as settings. These provided linear paths that were filled with grandiose spectacle. The setting of these games matched their overall tone and brutish action—everything was over the top. While environments were completely fictional, Greek civilization is old enough and iconic enough that the opulent classical Greek iconography fell within the realm of plausibility. What’s more, the urban environments often gave Kratos ample opportunity to assert his status as an anti-hero by slaughtering dozens of innocent people—they helped to feed the narrative. 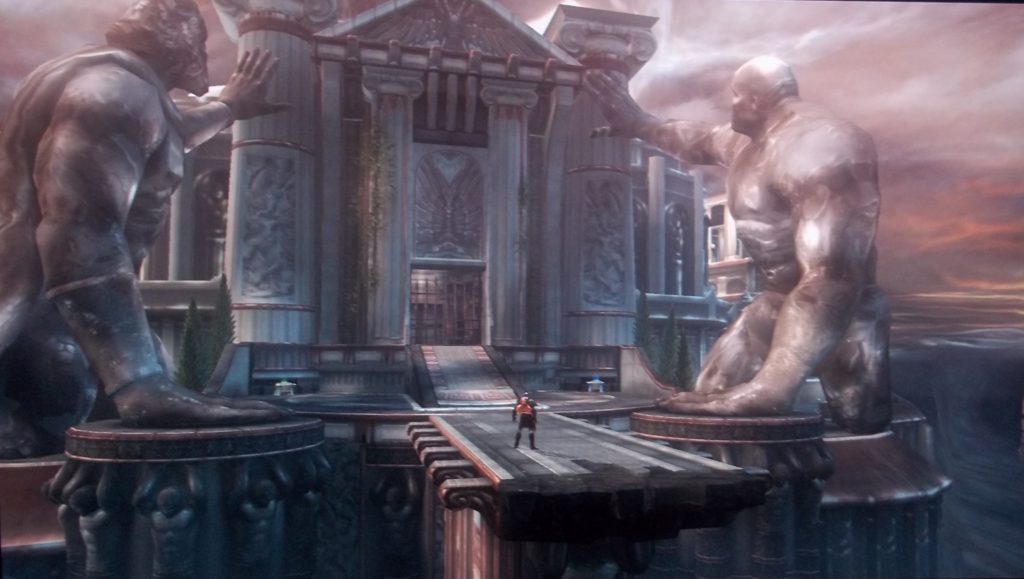 A God of War game set in Egypt would also likely have to rely heavily on civilization and urban environments. Egypt, after all, is one of the oldest civilizations on earth and was responsible for some of the grandest architectural structures of the ancient world. While the Giza Pyramids are by far the most iconic monuments of Ancient Egypt, the Egyptians were proficient in other forms of religious and civic architecture as well. Before the Greeks had perfected their Doric columns, Egyptians had Papyrus capitals. Before Greeks built basilica temples, Egyptians constructed massive hypostyle halls like the one at the Karnak Temple Complex. Outside of the Nile Valley and Delta, the Egyptian desert landscape leaves much to be desired in terms of topography and environmental diversity and almost necessitates a focus on cities. The desire to leave the city behind in hopes of differentiating the new God of War from the old ones calls into question the nature of the Egyptian city versus the pastoral landscape of Norse myth.

If you need more evidence for the change in tone and setting, look no further than the changes to the game’s camera. Gone is the fixed cinematic camera of old God of War games, to be replaced by a more traditional, player-controlled third-person camera. The perspective has shifted so that the player’s view is positioned much closer to Kratos, from where they can frame him against the surrounding environment as they please. Another big difference, as shown in in the E3 trailer, was the noticeable texture of bark on a tree. While the original God of War games have always been graphical powerhouses on their respective machines, they rarely focused on such detailed environmental depictions, and seldom positioned the camera close enough so that this lack of detail was obvious. The forest setting of this new God of War game brings, in every sense, Kratos and his world closer to us—it’s a place designed for small details to show and intimacy to unfold naturally. It seems primed, at least on a visual level, to evoke the relationship between hunter and prey, teacher and student, father and son. The change of setting was necessary, then, as it is difficult to hit the emotions this God of War aims to when screaming on the back of a massive titan. It seems no coincidence that three of the first four games Sony showed at its press conference (God of War, Days Gone, and Horizon Zero Dawn) all isolate their protagonists in very similar forested environments. 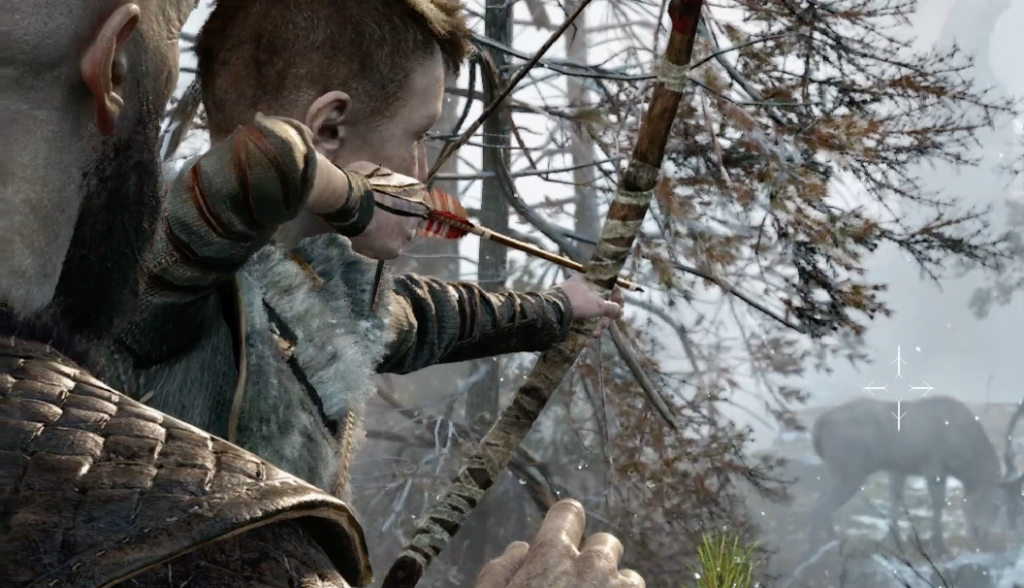 While the setting of an over the top and grandiose Ancient Greece fit the tone and style of the original games, it is clear that this God of War is aiming for something altogether different. It’s a quieter, more subdued God of War, one that has room for compassion and intimacy. Such a focus could easily be overrided by the whitewashing that an Ancient Egypt setting for the God of War series would require. Still, it does seem a shame that the option was sensibly rejected. Perhaps one day we’ll have a modern blockbuster game brave enough to take on the Egyptian setting and do it with a native of the land, and with rumors that the next Assassin’s Creed title will take place in Ancient Egypt, perhaps we won’t have to wait long.