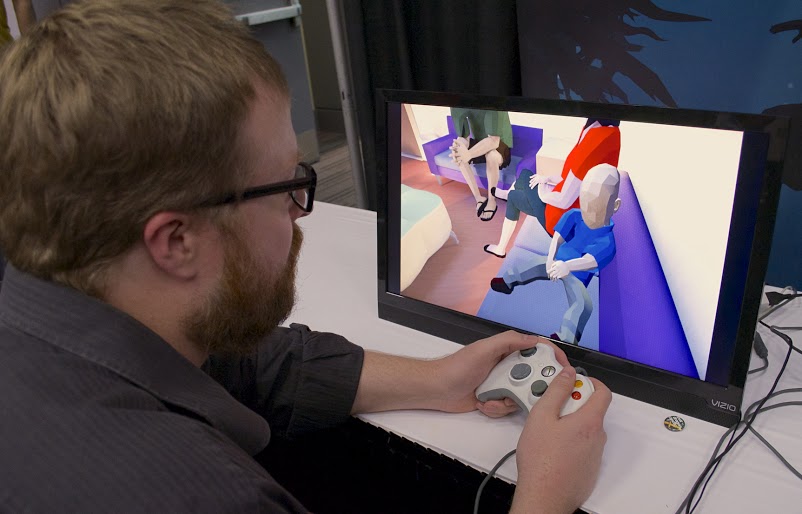 There’s a scene in Thank You For Playing, a documentary capturing the emotional journey behind the creation of That Dragon, Cancer, which summarizes both projects pretty aptly.

On the second day of shooting ever, directors David Osit and Malika Zouhali-Worrall documented the two-person dev team (Ryan Green and Josh Larson) showcasing their game at PAX Prime East 2013. Co-director David Osit describes the experience as the “first time we ever fully realized how special what they were creating was.” Both he and Malika began working on the documentary as outsiders to the videogame industry, which David says “actually helped us let our misconceptions about gaming be shattered and then rebuilt from the ground up.”

The scene in question opens with establishing shots over the massive gaming conference: panning across booths featuring titles such as Assassin’s Creed, Call of Duty, and Infinite Crisis. Blood spatters across each screen, the blank-eyed children with controllers in their hands staring up at the graphic death with slack-jawed absorption.

trepidatious attendees sit down to play the game

Finally, the camera arrives at the quieter, much less crowded booth for That Dragon, Cancer. Ryan Green is explaining to an inquisitive attendee that it’s an autobiographical game about his infant son’s battle with terminal cancer. One by one, somewhat trepidatious attendees sit down to play the game. One by one, a change comes over their faces, transforming from guarded uncertainty into a vulnerable kind of understating.

“It was incredible to see,” David recounts to me over the phone. “In the middle of this conference full of explosions, hyper-violence, and little to no interpersonal interactions—there is this game in the corner, where people are crying, getting up to hug Ryan after playing, talking to him about bereavement and grief… It just wasn’t at all congruent with what we’d thought the videogame world was about before we started filming.”

When the demo finishes, the screen goes black and the words “Thank You For Playing” fade in. A world of tension lies hidden beneath that seemingly simple phrase. For one, it’s an acknowledgement that the player has just undergone something emotionally difficult. For another, it’s an admission that our culture—particularly games—rarely ever asks us to engage in this difficult way. The phrase even communicates a certain level of defiance, like an assertion that That Dragon, Cancer is in fact an experience of play, despite its heaviness or lack of “game-ness.”

A good portion of the documentary spends time addressing the backlash the game has received from all ends of the spectrum: either from those who (aggressively) question its right to call itself a videogame, to those who accuse the Green family of exploiting their dying child for a stupid videogame. But to David and Malika, that backlash only shows the unprecedented opportunity presented by That Dragon, Cancer, as a challenge to our assumptions about both videogames and the grieving process.

“In Western cultures, we’re so afraid of talking about death that we hardly ever share our experiences of grief. Whenever we feel grief, it’s a personal, independent, private process—which can make it even harder to deal with,” David explains. “People focus on the unproductive escapism in games, but that inherent abstraction can help us to experience someone else’s private grief. Interactivity allows us to take a step back from our own lives, turn the rock around in our hand, and understand our grief from a whole new angle. It’s that vital detachment that people often look for in therapy, or in making art that helps them cope with loss.”

For Malika, the videogame conventions utilized in That Dragon, Cancer proved to be some of the most profound analogies for death and disease. In one scene, the game becomes an 8-bit endless runner, in which the terminally ill baby Joel is chased by the fire-breathing dragon. “I can’t imagine a more apt metaphor for our endless battle against human mortality,” she says. Even the strict linearity of the game illuminates some harsh realities about terminal illness since, “the Greens never felt like they had very many options or different possible outcomes. It’s not about saving your child through choices. It’s about having to accept—to exist on this linear path that only ever moves forward in one inevitable direction.”

To an extent, Malika hopes the documentary can act as a bridge that allows people who never considered picking up a controller to discover the power of a game like That Dragon, Cancer. “We even think the game can be a helpful educational resource for medical staff, therapists, clinicians, and anyone else who could benefit from an intimate experience of coping with terminal illness.” At the end of the month, the entire team will be screening the documentary and parts of the game at the Hospital for Sick Children in Toronto (hosted by the Garron Family Cancer Center). They hope to organize more of these private screenings across North America, to help engage in conversations that have been avoided for far too long.

Thank You for Playing is a dismantling of isolation

So much of both the documentary and the game is about alienation. Whether it’s addressing the alienation of a stigmatized medium, or the stigmatization of certain communities within that alienated medium, or the alienation of a family dealing with death and disease. Thank You for Playing is a dismantling of isolation, in a culture that both fears grieving together and playing as a way of conquering fear. The phrase is more than an expression of gratitude to the player from Ryan and his family—for sharing in their pain and their love. Thank You For Playing is an invitation: to reach out, grab a controller or mouse, and engage in something that’s truly difficult.

You can catch an excerpt of Thank You For Playing at Kill Screen’s one-night film fest at the Two5Six conference in May—where both Ryan and Amy Green will be featured as keynote speakers. This week, the documentary premieres with four screenings at Tribeca in NYC from Friday April 17th and on, and three screenings in Toronto at Hot Docs from Tuesday April 28th and on. For more screening details visit their website and reach out to the team through Twitter.