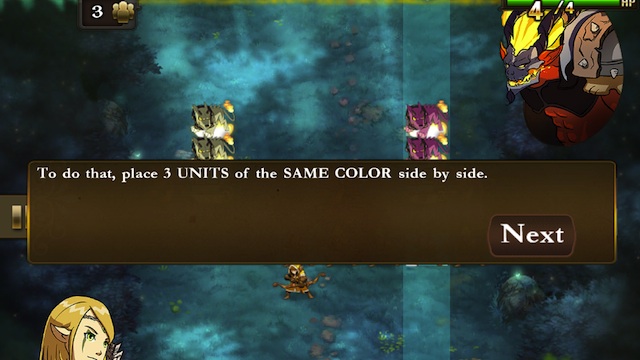 Tutorials, those intolerable instances at the start of a game when we surrender our attention to scrupulous instruction on sense-dulling punctilio, aren’t fun. At best a banal evil, and at worst a reason to give up on a game altogether, they have a tendency to knock me out. Though I was initially excited to play Might & Magic: Clash of Heroes for iPad, I soon found myself nodding off, paralyzed by a longwinded and uneventful tutorial.

Now science has an explanation. I’m not narcoleptic after all. I was a paradigm case of the ten-minute rule.

It turns out that university students have the tendency to tune out around the ten minute mark of a lecture. According to the data of John Medina, a developmental molecular biologist and the author of the book Brain Rules, this is a natural and nearly-universal phenomenon.

His research not only shows why I was always dozing off in Dr. Buckholtz’s freshman Philosophy class. It also makes sense of why game tutorials conk me out. The best (and worst) instance of this was when a buddy left me on his couch with a copy of Splinter Cell while he prepped for an exam, and was waking me up with the controller in my hand forty-five minutes later. I had gotten about ten minutes into the tutorial.

If we think about games as teachers, how many lectures would we be snoozing through?

As for Might & Magic, I’d probably really enjoy it, if I could ever get through the overelaboration of rulesets and the garrulous manner of its trite high-fantasy characters. There’s a rather obvious solution to the problem that the graphs of Medina point out: variety! Generally speaking, around every ten minutes, a good professor will ask for student input, make a joke, tell a tangental story, or just change the subject. In the case of a puzzle/strategy game like M&M, maybe it should let the player try to figure out what to do for themselves.

I understand there is a fine line between being bored and being lost, and in the case of games, a few minutes of either is enough to exasperate me. The best tutorials get this right. For instance, I would have happily kept playing Nier’s prologue, an eloquent balance between discovering skills and lambasting abominable giants. It might have been better than the actual game. The way it switched back and forth and back between the arresting saga of your daughter’s sickness and learning to use super-powers and smashing some anthropomorphic statues jaws in was exemplary. If more tutorials could be as diverse and entertaining as that, I’d be in heaven.

But just to be on the safe side, let’s make a rule: no tutorial should ever ever ever!! take longer than ten minutes to complete. Kay, thanks.