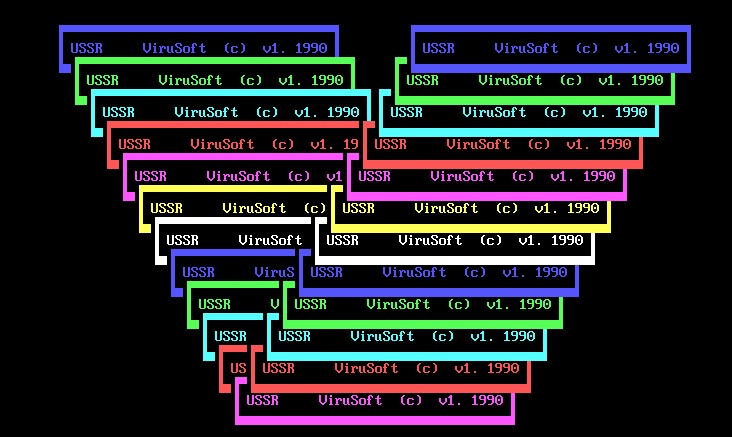 Malware. Blech! We hate malware. And so we should—deleting files, maliciously clogging up our desktops, turning our browsers into never-ending adverts. But it’s so boring and irritating these days. At least back in the 1980s and 1990s you could take a step back and admire both the technical and artistic achievement of malware before it ate your computer.

If you’re not familiar with the malware of yesteryear then, fret not, you needn’t miss out. The internet archivists at archive.org have teamed up with self-professed “malware adventurer” Mikko Hypponnen to provide The Malware Museum. It’s a collection of malware programs that were made during the penultimate two decades of the last century to infect home computers. You’re able to view the animated effects and messages that would display on your screen as these viruses entered your computer and started ripping their insides apart. Importantly, The Malware Museum has quarantined (removed their destructive properties) the viruses and lets you run them through an emulator so you can view the show without your computer being at any risk.

“coding a virus can be creative”

What makes the malware of the ’80s and ’90s worth revisiting is that it was mostly created to experiment and play pranks. Sure, it may have been collapsing peoples’ entire personal contents on their PCs but there usually wasn’t much to it beyond that. Compare that to these days, with malware mostly being used by companies and governments to spy on people or nick their personal information (read: wreck their lives), and the malware of old seems quite innocent—just some hackers having some fun.

This more playful era of malware saw their creators wanting to show off their skills, taunt their victims, and sometimes even play games with them. Not much of the subtlety of today’s malware was present. Instead, it would announce itself on your computer like the jovial ringmaster for a doom circus. Colors and letters would scramble across the screen such as in the image above from CRASH. The word “ha!” was written in ASCII as if to display the malware creator’s joy in having scored one of their unknown prey. Text might scroll in the style of the crawling Star Wars intros. Some scream at you, some drew images, others were impressive displays of coding skill.

One of the malware programs, called MARS G, captured the spirit of malware creators back then, it showing you a scrolling 3D impression of the red Martian landscape, with the message “coding a virus can be creative” written in text at the top. The creators of old-school malware turned their hostile software into an art form as they explored the creative possibilities of taking over someone’s computer. It even went so far as turning malware into a game, such as Disk Destroyer, which steals all your data and then gives you a chance to get it back by playing slots. You get five credits to spin the reels, and if you match three pound signs you get your disk back, or if you match three question marks you get hacker’s phone number. Otherwise you lose the game and all your data with it.

What’s less obviously remarkable about all this malware is the technical feat behind them. This is something that Hacker News user “luso_brazilian” puts into perspective:

“Back in the days a lot of thought and ingenuity was put into making these viruses. For instance, the Friday 13th virus:

* infected both .COM and .EXE, increasing the size of the former by only 1813 bytes

* on infection, became memory resident (using only 2kb of memory)

* hooked itself into interrupt processing and other low level DOS services to, for instance, suppress the printing of console messages in failure cases (like trying to to infect a file on a read-only floppy disk)

* activated itself every friday 13th and deleted programs used that day

It still managed to spread itself worldwide (mostly via floppy disk sharing as the world wide web didn’t exist yet) and went mainstream enough for the broadcast news to advise people not to turn on their computers on that date or to push the date one day ahead.

You can check out The Malware Museum for yourself to see the rest of the presevered viruses.