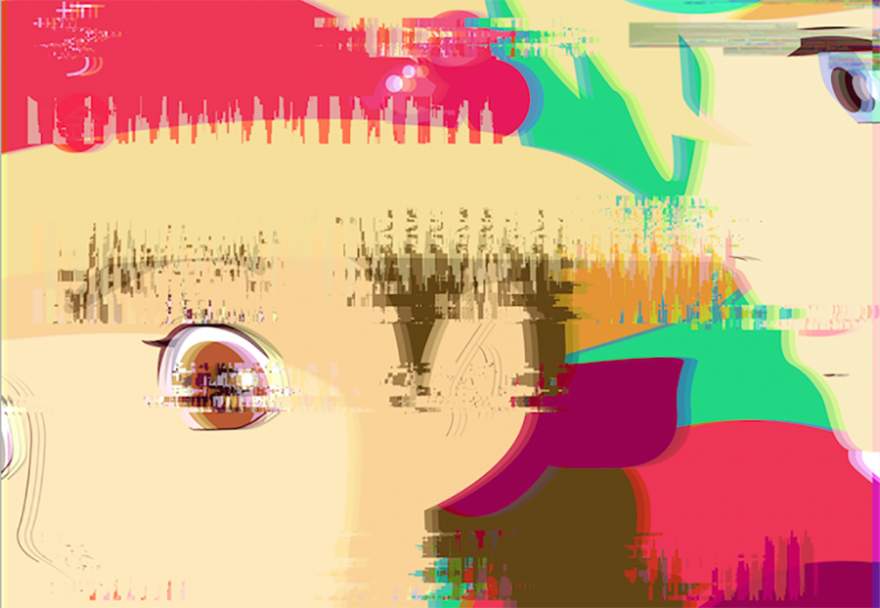 The first time I ever watched Princess Mononoke (1997) was on a grainy bootleg from a relative. I was a kid, maybe nine-years-old, but the otherwise beautiful film’s terrible quality was ingrained in my psyche. Since I was only nine, its fuzziness didn’t bother me. It wasn’t until I was much older, and more appreciative of the crisp existence of blu-rays, that I was able to rewatch the film and re-fall in love with it all over again.

Still, that first grainy take on the film rests as my first “true” experience with a Hayao Miyazaki film, and was my gateway into the legendary animator’s other classic works. While my first viewing of a Miyazaki film wasn’t on an arbitrary VHS like many others, Hyo Taek Kim’s glitch art series of distorting Miyazaki’s imagery, chimes into a similar feeling. That glitch-prone, off-kilter feeling a lot of our generation share in experiencing Miyazaki’s magic for the first time in our youth—even on something as shabby as a VHS tape or bootleg.

“Ghibli’s the master of creating emotions”

Kim, a Brazilian-Korean designer, isn’t a stranger to channeling his love for Miyazaki into his works. In the past, he’s divvied up films into minimalistic color palettes (including some of Miyazaki’s films), and aptly redesigned Andy Warhol’s classic Campbell soup can series, but theming the cans after Miyazaki’s filmography. With the glitch art series, Kim marries the distorted-VHS aesthetic that he grew up with to the Miyazaki characters he loved the most, creating a wholly unique blend of nostalgia and modern (since Kim even borrows characters from Miyazaki’s post-90s films). As Kim told The Creator’s Project, “Ghibli is the master of creating emotions, and I love to revisit these moments whenever I get the chance.” Whether it’s moments of nostalgia in watching VHS tapes, or even just the feelings of empowerment that emit from the films themselves.

Characters from Miyazaki’s Spirited Away (2001), My Neighbor Totoro (1988), Howl’s Moving Castle (2004), Ponyo (2008), Nausicaä of the Valley of the Wind (1984), Kiki’s Delivery Service (1989), and Princess Mononoke are all represented in Kim’s discolored homage to VHS glitches. There’s something palpably nostalgic about glitches, whether they’re of the videogame variety of restarting a game over and over again to make it work, or the bastardized quality of collected VHS tapes. The VHS-glitch harkens back to being a kid, and watching your favorite movie over and over again, that is, until the tape dies.

You can purchase prints of Kim’s Miyazaki glitch art here.

Via The Creator’s Project.