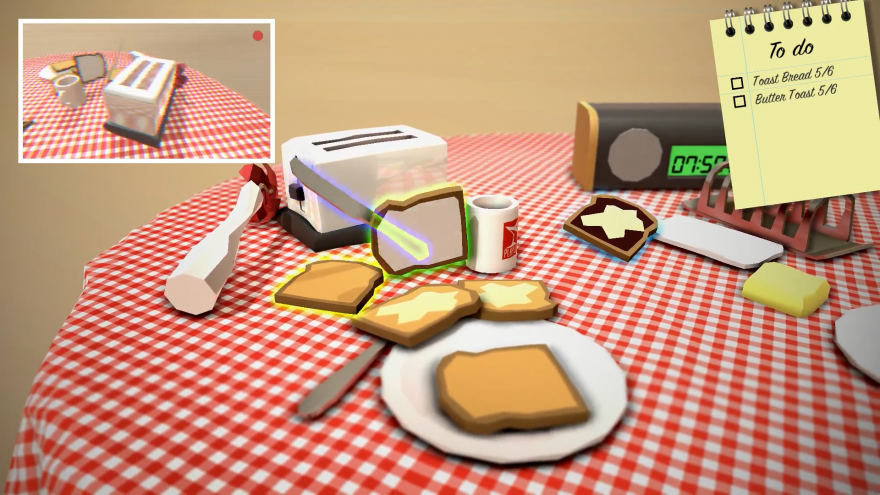 Making breakfast is easy. If I can regularly manage to pour myself a bowl of cereal in a half-asleep stupor after I wake up then it’s a testament to just how little brain power breakfast usually requires. However, breakfast isn’t quite as easy as it seems in The Breakfast Club, a product of the 2016 Global Game Jam. In it, you and three friends must work together to make breakfast. Sound simple enough? Well it’s not. With Surgeon Simulator-esque controls and the chaos of four-player co-operation, maneuvering breakfast items from plate to toaster and back again has never been more challenging.

what happens when you make the routine hectic

Breakfast is the antithesis of epic. It’s a narrative trope to start a story with a morning routine because it’s what establishes a base level of normalcy before things get hectic and all the world-saving happens. The Breakfast Club asks what happens when you make the routine hectic. When we’re so used to videogames presenting with larger-than-life scenarios, focusing on the mundane in itself is absurd. Making toast is decidedly boring, but even boring scenarios can be made interesting (or at least challenging) in videogames.

Though wacky physics are always good for a laugh, the difficulty of control also subverts the promise that digital makes everything easier. It’s 2016, weren’t robots supposed to be making breakfast for us by now? Isn’t that part of the vision of utopia, having the mundane automated? The Breakfast Club flips this long-standing expectation by taking a simple task and using digital restraints to make it nearly impossible. As games and gaming technology race for the better graphics, more sensitive controls, and more immersive experiences, The Breakfast Club instead embraces the sometimes clunky and broken way we control what we see on screen.

You can download The Breakfast Club on this page.