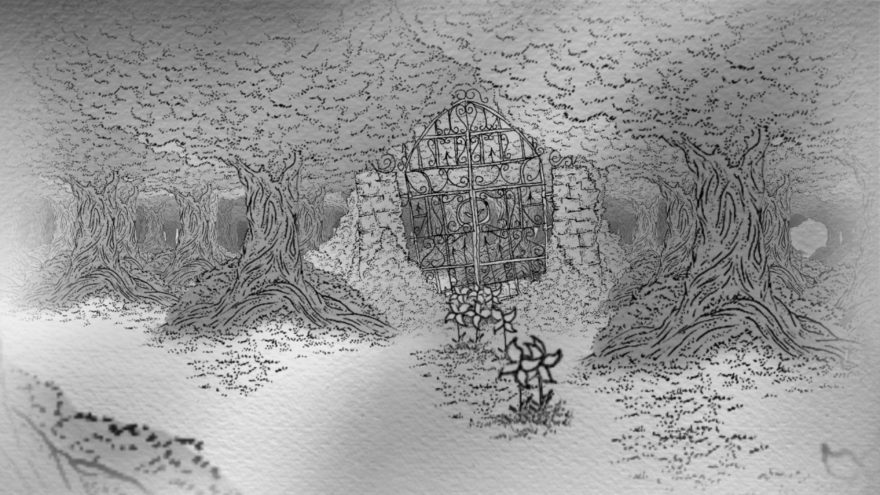 The paper illustrated world of John Evelyn’s The Collage Atlas looks a lot like a Victorian parkscape as envisioned by A-Ha. But Evelyn, a UK-based illustrator and game creator, is looking to invite players into his hand-drawn world and perhaps share with them an interesting experience tinged with a little nostalgia, and maybe even a little sadness.

“Even as adults we still see fairy tale scenes when we allow our minds to wander—those trees that look like giants, and those clouds that look like shoals of fish,” Evelyn said. Drawing from these natural observations, Evelyn is creating a puzzle game that comes to life before players eyes.

Traveling through an illustrated world, players must find their way through this monochromatic dreamscape by finding the correct path home. His previous title, a mobile game called A Skyrocket Story, utilized the same hand-illustrated look seen in The Collage Atlas. Unlike Skyrocket, which was limited to a 2D plane, The Collage Atlas is a traversable 3D world that comes more into existence the further players go. Almost like a pop-up children’s book.

Nostalgia, Evelyn says, is the main driving force behind his design work. Citing Japanese artists like Naohisa Inoue and Hayao Miyazaki, as well as French author Antoine de Saint-Exupéry, Evelyn explains that he “tend[s] to be inspired by nostalgic, sentimental and reflective works.”

While Evelyn has been working as a designer and developer for years, The Collage Atlas is by far his most ambitious project. It’s a challenge for sure for the one-person developer, but the idea for Atlas has been rolling around in Evelyn’s head for far too long to not make. The coming title is meant to serve as a sort of, prelude, to what Evelyn envisions will be the beginning of a much larger game.