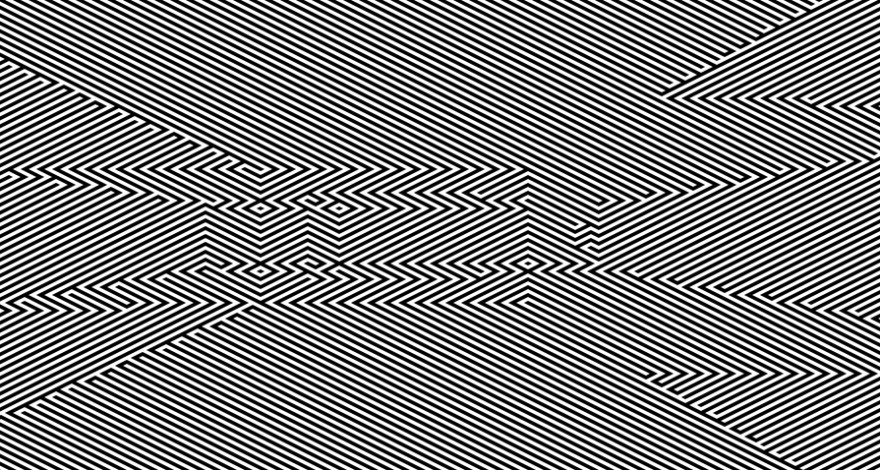 I can’t trust my eyeballs right now. Just typing this black font onto this white space is steeped in something my body recognizes as danger. I think I see snakes wrestling across the gaps between the words. No, it’s worse than that. Oh god.

You might laugh, or you might be outright confused right now, but I can guarantee that in a few minutes you will know what I’m going through. I’ve just played through QWOP (2008) creator Bennett Foddy’s Zebra, which he plainly describes as “another little game.” It is not just another little game. It’s the devil in stripes and it’s inside your freakin’ computer. It’s in front of my eyes right now, doing whatever the hell it does: throwing grids, smearing colors, dancing an electronic jig. Of course, all this is exactly why I love it.

You don’t need a reason to make a videogame but Foddy has one for this. Zebra hides a prompt for the students in his weekly prototyping class. To find it, you need to navigate to the end of its maze. It shouldn’t take you longer than a few minutes. Especially as, topographically speaking, this maze is pretty straight-forward. There might be a couple of invisible walls placed meant to deceive you but nothing more elaborate than that. Oh, and a bunch of corners. You’ve probably been turning corners your whole life so you can’t possibly be intimidated by that, can you?

Yes you can. For Zebra lives up to its name by being an all-singing, all-dancing visual illusion. Oh, it’s a crafty rascal, let me tell you. When you enter that maze for the first time it’s something of a delicious fright as the black-and-white lines break their way into your head; you will never see the same again (at least, not for a good five minutes). You’re probably familiar with illusions similar to this. The café wall illusion is one of these—black-and-white tiles that sit parallel to each other appear to curve and become skewed when spaced apart at the right distance. Or how about scintillating grid illusion, which was discovered as recently as 1994, and sees black dots rapidly appearing and disappearing when you look at a black-and-white grid.

There’s nothing naturally deceptive or magical about these types of illusions. It is only our eyes that cause the illusion, the theory being that these intense meshings of color and light cause lots of receptors in our eyes to fire off and confuse our perception. Foddy’s Zebra does something similar as you move around it, the multiple lines tricking your sense of space, becoming a disorienting and nauseating experience. The word you can find at the end of the maze is, let’s say, appropriate.

You can play Zebra right in your browser.