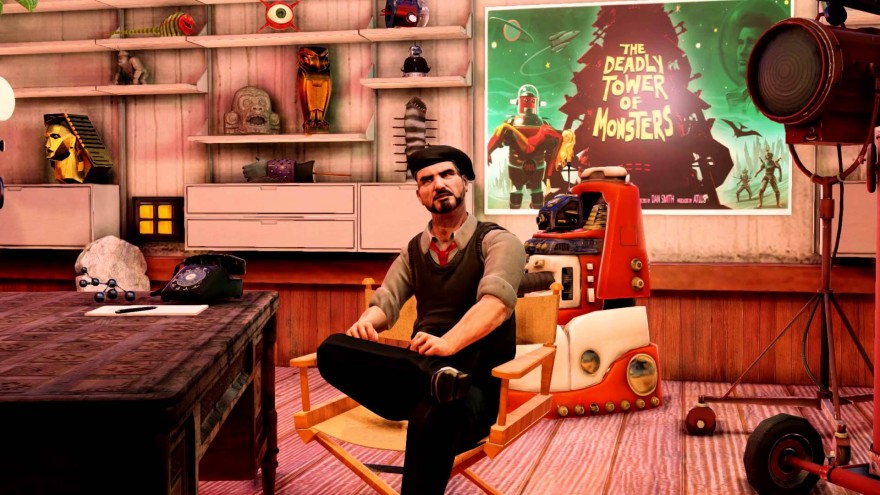 Title:
The Deadly Tower of Monsters

Bad movies can be a laugh to watch. It’s best done with a certain camaraderie, a group of buddies getting together to voluntarily partake in schlock, probably with alcohol and snacks to push them through it.Hell, Mystery Science Theater 3000’s (1988-99) Joel Hodgson has made an entire career out of that idea alone. But stripped of the jokes, there’s only so many rubber-masked martians and tin foil spaceships held aloft by fishing wire that your average viewer can tolerate. Let’s be real: no one is earnestly watching 1950s camp like This Island Earth (1955) for its cinematic merits.

As Starspeed, the mysterious Scarlet Nova and “The Robot,” the titular tower throws schlocky monsters of every variety your way, with Harryhausen-lite dinosaurs, rubber-masked monkeys, and flying, pulsating brains showing up to mindlessly take a beating. We never quite find out why Starspeed is on Gravoria, and Smith’s commentary cops to the fact that it doesn’t really matter. It’s the action that counts, right? We’re here to see some baddies get beat up, so let’s get to it.

True to the hackneyed plots and tacky costumes of the films the game is aping, there’s a charm in the low-rent plot and absurd sidequests. The artifice of the game’s aesthetic choices lend to some amusing jokes on Hollywood tropes of the era like reused sets, unexplained character motivations, and technical gaffes of every flavor. However, this visual comedy isn’t matched by the voiceover. Compared to recent game narrators who reflexively comment upon player choices and decisions, like those of Bastion (2011) or Transistor (2014), Smith’s anecdotes remain relatively static. Get to point A, he makes a joke. Get to point B, a story about somebody bringing their kid on-set and dressing them up like a squid. And so it goes. While a story about getting chastised by the crew for rubbing his greasy hands all over the camera lenses (just as massive on-screen fingerprints cover the action) is chuckle-worthy, most of the commentary falls a little flat.

No one is earnestly watching 1950s camp for its cinematic merits

Most impressive with all of this is the game’s ability to tirelessly throw absurd scenarios at you as quickly as possible. While the plot and characters are mostly relegated to window dressing, the tower itself and its goofy inhabitants easily become the star of the show.

As soon as you find yourself tiring of beating back waves of bone-wielding monkey-men, it’s time to destroy an island of mutated ants. Once those have been exterminated, it’s a jetpack-fueled platforming section. Have a new gun. Or three. Kill a gigantic ape. Go skydiving. Thwack some dinosaurs. Listen to Dan Smith’s pointless anecdotes while deflecting pteranodons and fireballs. Every bit of action takes place on just the one tower; a vertical sandbox environment. Rather than traveling to far-off mountains or exploring sprawling cities, you’re free-falling from a few thousand feet in the air before warping back up to the top.

The burning question of “how did this get made” looms over any terrible movie. It’s usually the fever dream of an insurance salesman from Idaho or a wayward studio executive hell-bent on cashing in on the latest fad. That a trainwreck of a film with such a production was able to navigate the layers of red tape in Hollywood makes you wonder who is responsible for greenlighting these disasters. The enjoyment of this garbage entertainment usually comes in the schadenfreude of watching those dreams come crashing to earth. Recreating the aesthetic without the real-world consequences leaves The Deadly Tower of Monsters feeling a bit hollow. Is seeing a boom mic dip into frame still funny when an art director decided to place it there, rather than somebody’s nephew just slacking on the job? No, not really.

That said, while The Deadly Tower of Monsters might be silly and a little clunky, it’s hard not to root for something that lovingly apes (for lack of a better word) a bygone era so successfully. Nobody is going to mistake Them!’s (1954) nuclear-sized ants for High Art, but you can’t blame yourself for chuckling at the screen while reaching for more popcorn. Even professional bad-movie-watcher/joke-writer Bridget Jones-Nelson of MST3K admitted to Wired that “occasionally, you’d be watching the movie and you’d forget to riff, because you’d get wrapped up in it. Even if it was Boggy Creek II: And the Legend Continues, I’d be like, ‘I kind of want to know what’s going to happen!’”