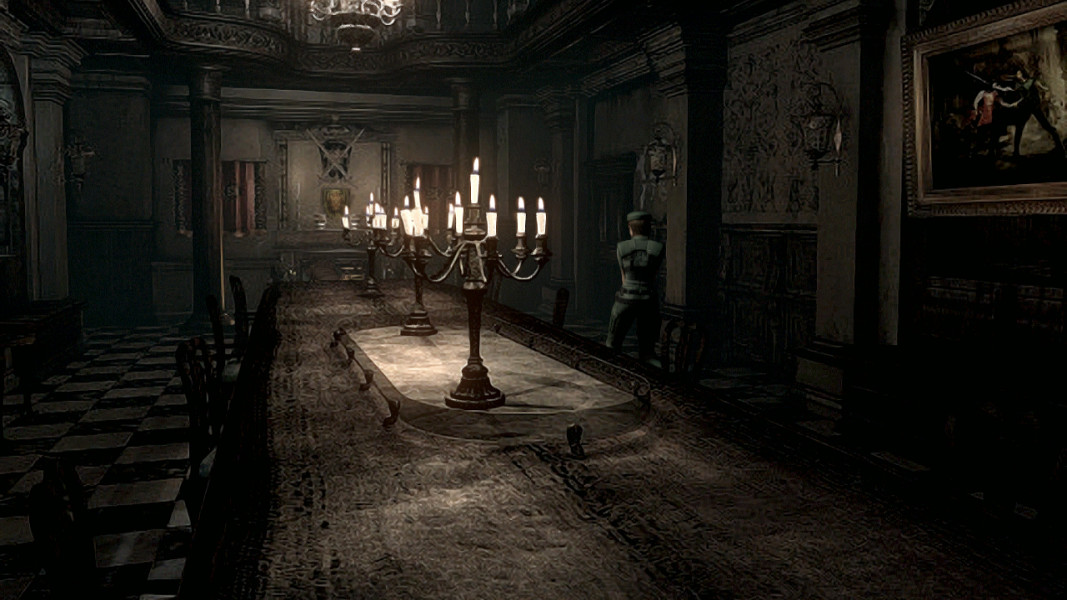 Resident Evil, released in 1996 for PlayStation 1, is hilarious—it’s so funny. The voice acting is ridiculous, the plot is sensational and the live-action cutscenes look like they’ve come from a porn parody film. In fact, that’s Resident Evil in a nutshell: from the campy character and costume design through the cheap music and sound effects, Resident Evil feels like a high-end fuck film, only without any fucking. Look at Jill. Look at Chris. Look at BARRY. This is a cast of actors straight out of a Brock Landers movie. Resident Evil has become the beloved low watermark of videogame production value, but designers Shinji Mikami and Hideki Kamiya, and the rest of the team must have known what they were doing. Surely this game was never meant to be a straight-faced horror. Surely, to play Resident Evil is to fall for its honest, vivacious charm.

Resident Evil is sexy and fun. But the Resident Evil Remake, released six years later, is dull and dry. The difference may be based in a simple mistake. It’s still a game about zombies, monsters, and an elite group of cops called S.T.A.R.S., but so much of Remake is rooted in—not timidity exactly, because the original game was overhauled a great deal—but self-consciousness. It feels to me like a renege on Resident Evil, like instead of rolling with the original and all that made it wonderful, the game’s designers have grown embarrassed. It feels like an unnecessary apology.

The second floor of the dining room in Remake is a wonderful visual flourish—the lightning crackling outside, casting the shadow of a lone zombie large on an opposite wall is one of the finest single images Capcom has created. But other than that, the GameCube (and, later, the PS4’s) better hardware, while making for a more detailed mansion, leads Resident Evil in a boring direction. The original was colorful, blocky, striking. Remake is dim and dark. To some extent, it’s stifled by player experience—that main mansion hall, once you’ve explored it time over in the original Resident Evil, is never going to hit you the same way again, even recreated in a brand new engine.

The tone might not be as sophisticated, but it is consistent

But the new areas built for Remake, the additions to the mansion, are all bland and perfunctory. Apart from the nodding twists on old puzzles, I don’t remember, really, any of the new areas added to Remake. They’re just uneventful rooms, more area. That dark corridor behind the kitchen does nothing—it’s not scary, it’s not visually interesting, nothing happens there. That’s why, I think, the designers tried to punch it up by chucking in a few giant spiders and a puzzle with a fuse box and some water, but it’s halfhearted. Lisa Trevor’s cabin in the woods is a flat detour, again containing some arbitrary flashes (a graveyard and a puzzle with a weather vane) and that half hour long section, about two thirds into the game,  where you go under the mansion and into the catacombs, traversing some caves and solving some lever puzzles, is drab and slow. There’s nothing aesthetically vibrant about brown cave walls. Compared to Resident Evil’s usual, weird puzzles, throwing levers feels pedestrian.

The original Resident Evil is much leaner and almost every room gives you something, be it an enemy encounter, a puzzle piece or some memorable visual flair—from the tiger statue closet to the dog corridor and the bar with the piano puzzle, you can refer to basically every area in Resident Evil by something that happens. Remake on the other hand wastes a lot of space. It has more booby-traps and monsters, but the mansion in Remake—and I mean this in the pejorative sense—feels more real. I’ve written before that Resident Evil 2’s (1998) police station is at its best when it drops the facade of a real municipal building, and leans more towards fantasy architecture and decor. The same can be said of the two versions of the mansion featured in Resident Evil and Remake. The original doesn’t make as much sense as a building and lacks the lustrous detail, but that makes it appropriately otherwordly.

I was talking with a friend recently who claimed the original Resident Evil is “over lit and lifeless.” I don’t disagree. But the mood set by Resident Evil’s over lighting, as opposed to Remake’s under lighting, is more spirited. Remake is supposed to be oppressive and an ordeal, but you’re playing as cops, with lots of guns, who are introduced in a smoothly produced, spectacular cutscene. The game’s lit in spite of the characters. These guys are trained soldiers—it has the blackened visuals, but I don’t buy Remake’s world as cruel. By contrast, the eager, action-heavy opener of the original Resident Evil, which ends with the characters tooling up and bracing for a scrap, looking straight into camera, feels absolutely right given the brightness and expanse of the mansion. These guys want to get into it. They want to know what’s going on. They’re as sparkling and fizzy as the mansion’s many lightbulbs, unburdened by the kind of introspection and pessimism connoted by darkness. The tone might not be as sophisticated, but it is consistent. Remake is sincerely trying to a serious horror, but its efforts regarding lighting and set feel occasionally token.

A lot of Remake features no music—it’s all silence and diegetic sound. When there is a score, it’s comprised of slower, somber rearrangements of the original Resident Evil soundtrack. That, I think, exemplifies the difference between the two games. Listen to the music from the snake boss battle in Resident Evil. Now listen to the same battle in Remake. The shark tank in Resident Evil. Now the shark tank in Remake. The original is cheaper, but every note is clear, distinctive, ALIVE. It sounds like one of John Carpenter’s scores, peppy synth that’s instantly recognisable and easy to hum. Remake’s soundtrack, by contrast, is mainly vague, orchestral posturing. It sounds more expensive, but it has no flavour. I mean, just listen to this. And now listen to this. One is unmistakable. The other could have come from any game.

Remake is at its driest when it’s dealing with Lisa Trevor, and her whole sub-plot and history. Resident Evil Zero (2002), developed alongside Remake and with the same technology, features as its antagonist a guy in a floral smock who sings hymns in order to command his army of leeches. Lisa Trevor is an altogether sadder, ostensibly more intimidating monster. Through found trinkets and diaries, you discover how she was kidnapped and transformed against her will, and is now wandering the mansion searching for her parents. She has her moments—when you hear her moans from a distance, it puts a rod up your back—but like Remake’s detailed architecture and its more reserved soundtrack, Trevor feels like an effort to ground Resident Evil, to make it—in the sense of Christopher Nolan’s high-end Batman films—grittier and more “real.” Her character isn’t badly handled and it’s unfair to criticise Remake for going more serious. But you look at all the sequels, spin-offs, movies, and novelisations of Resident Evil now, and it seems like a series absolutely drowning in lore and “back story.”

I can’t help but think of the tertiary Lisa Trevor plot line as a progenitor to that—Resident Evil 1’s story was fine, and much more nimble, without it. Sobriety and discipline seem like the creative bywords behind Remake and by that measure it’s a success in its own right. But the original Resident Evil is earnest, and I appreciate earnestness, and an absence of cynicism, above seemliness. To an extent, you can see that earnestness also in Resident Evil—Code: Veronica (2000), a game where, instead of a tortured, mutated girl, the villain is an insane English aristocrat with a penchant for cross-dressing. Deadly Premonition’s (2010) twists and turns always feel like the creators saying “yeah, why not?” Same goes for Driver: San Francisco (2011). Easily, that could have been another straight crime game, but the creators tried adding a science fiction twist and even a little soap opera, and it became something much greater. Resident Evil Remake is a contradiction. It’s a bigger game than its ancestor, made with more money, more detail and more craft. Yet, despite its expanded size and prestige, it feels like a retreat, like a game less confident in effectuation and painting in broad strokes.