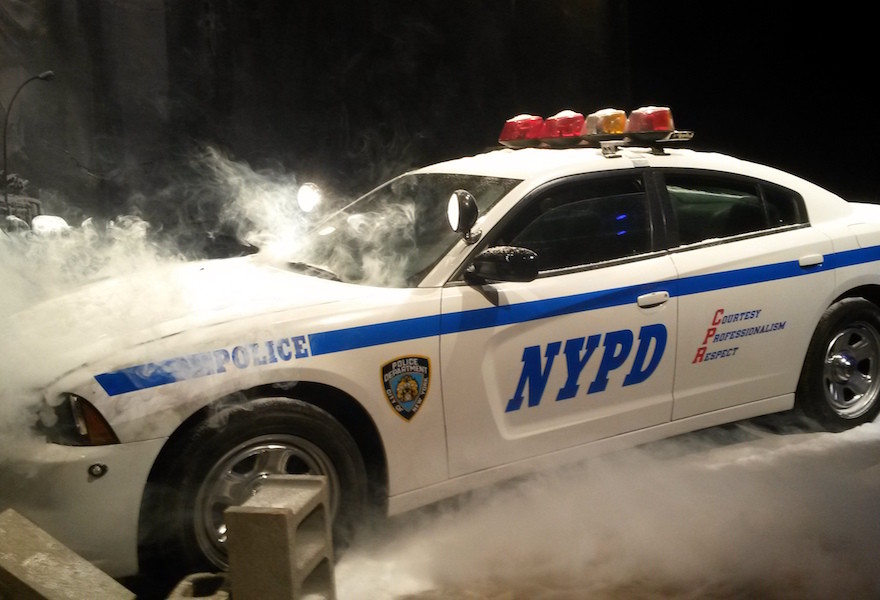 When I entered Ubisoft’s The Division press event on February 2nd in New York, I was greeted by a display of an NYPD patrol car that had crashed into a lightpost, with smoke bellowing from its engine and its lights still flashing. Machines in the rafters vigorously blanketed the room in snow. Caution tape separated visitors from the staff-only areas. A street marker for Madison Avenue with a “Closed” sign attached to it overlooked the game’s demo stations. A Do Not Enter sign sat in the distance. I had entered a New York that felt like it had been thrown into chaos.

For New Yorkers, imagery like this still hangs in the recent past. For how much it’s affected global affairs, September 11th, 2001 is a very local, very painful memory here. I have close personal friends who saw the damage, the loss of life, and the heroism of the first responders that day with their own eyes. After ISIS recently made threats against NYC, they told me how these memories still haunt them and that they don’t want an attack like that to happen again. As terrified as I was sitting in a classroom in Indiana that day, the people here felt the fear of what might happen next deeper than anyone else in the country. Ubisoft has become known for recreating real-life cities in virtual space, but The Division comes with the added challenge of tackling how New York City responds to terror.

The event itself kicked off with a 1.5 hour panel from the game’s lead designers as well as a few survival experts. Most of its time was dedicated to selling us on how supposedly “plausible” and “realistic” the game’s scenario of a Black Friday smallpox attack spread using infected paper money was. The attack wasn’t confirmed as being terrorist in origin, but the implication was there, and regardless, the results were similar. We were bombarded with statistics about how most Americans don’t wash their hands after handling cash and about how much money in circulation today has trace amounts of Anthrax on it. Expert testimony was a centerpiece here, but only in regard to how ‘innovative’ and ‘clever’ the game was being in its realism. As if imagining New York under attack were a new idea.

For all this time spent explaining the game’s setting, my time actually playing The Division failed to capitalize on it, feeling much more like Destiny (2014) grounded in modern times than the creative ruins of I Am Legend (2007) or Escape From New York (1981). The Manhattan Midtown I was shown was essentially the same as the one I know now, only with fewer people and more chest-high walls. I was lead through this drab take on my now home by a developer who didn’t want me experimenting with the game too much. As I tried to break and test it in as many ways as I possibly could, I was shepherded instead towards corridor shooting where I fought large gangs of looters, my military training and equipment making my opponents seem drastically inadequate in comparison. My enemies were New Yorkers struggling to survive in the wake of danger and I was spending my resources shooting them down rather than saving them. Was I really the rescuer here? I had all this money to spend on riot shields and holographic displays, but not on food for people so in need they were braving Smallpox-infected streets. But the looters were wearing bandanas over their faces and speaking in slang, as if that justified their deaths.

For New Yorkers, imagery like this still hangs in the recent past

When I was offered the chance to stop playing and interview one of the game’s designers, I was relieved. My eyes had glassed over while I was staring at the screen, and a quick glance around the room drew me back to reality.

“So when you have a disaster scenario set in New York, the obvious comparison is to 9/11,” I mentioned to Julian Gerighty, the associate creative director for the game. I wanted some basis for why the game was set in such a touchy area given its subject matter. “I know you spoke to survival experts about the realism of the game’s scenario. Did you talk to first responders or other people who were there during 9/11?”

“I didn’t,” he responded. “I don’t think even the parallel between this game scenario and 9/11 exists.”

I was a bit surprised. Surely, I couldn’t have been the first person to draw this comparison, right? “So you didn’t take September 11th into consideration when making the game?” I asked.

“It’s the first time I’ve ever been asked about it, and it hasn’t really crossed any of the meetings that I’ve done on it before.”

When I pressed further on the game’s themes, whether it was the inherent anti-capitalist message in centering the game around a virus spread through money, or the draconian justice of armed peacekeepers indiscriminately shooting down looters and escaped Riker’s Island inmates (another class of enemy in the game), he told me, “At the end of the day, it’s a videogame, it’s an entertainment product… There’s no particularly political message with it.”

But works of art aren’t made in a vacuum. They can never be entirely free from their creators’ assumptions. In its premise, The Division brings up a number of fruitful topics that could be entire games of their own: Dealing with the fallout of a terror attack in New York. A virus spread through cash on the biggest shopping day of the year. Turning Times Square into a player-vs-player meat grinder called “The Dark Zone.” Insisting on a cynical version of a New York under siege where people in need roam the streets murdering each other instead of helping. And then there’s the Division itself, a group of autonomous sleeper agents living normal lives who activate in times of great need and have the authority to restore order with no restrictions, Constitution be damned. This is based on NSDP 51, a real-life continuity-of-government plan set forth by George W. Bush, the majority of which is classified. The Division speculates it might look something like the eponymous organization within the game. The civilian hero aspect at play here is almost like a twisted take on a first responder, like a volunteer fireman who puts out fires less by blasting them with water and more by waging war against arsonists.

Not wanting to confront these themes doesn’t make them any less apparent in the text, just as not acknowledging that I’m wearing a red shirt doesn’t make it any less crimson. This means that The Division approaches heavy subject matter with all the subtlety of a 16-wheeler, casually tossing around imagery that a good deal of people associate with pain and loss while not paying it due diligence. Maybe, in the name of fun, this is acceptable. Maybe the implications being made here don’t matter, so long as players enjoy themselves. That’s certainly what I was told. But if Ubisoft was so excited about this game’s story that they felt the need to focus on explaining it to me for over an hour before I even got to play the game, it’s clear that they care about it at least somewhat. If it didn’t matter at all, they wouldn’t open with and give an extended breakdown of it. In emphasizing the realism of the setting they had invented, the development team clearly put no small amount of effort into researching how accurate it was from a survival scenario perspective. But this only highlights the comparatively light research put into New York’s already fervent, if tragic, history with attacks like this. If The Division cares as much about realism as it claims, why not focus more on what is unique about the city it has chosen for its setting?