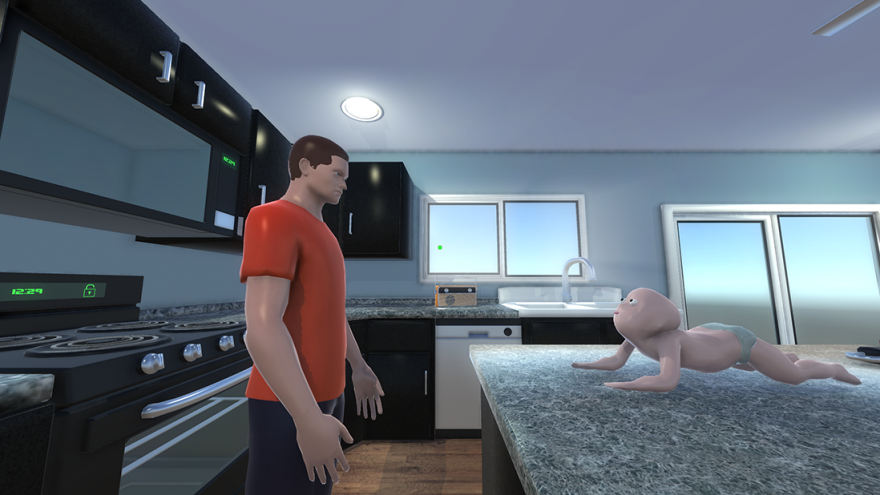 What better way to start the day than finding out your baby son is trying to roast himself in the oven? Flare your nostrils wide and inhale that pungent aroma. Ah, the smell of searing tot flesh in the morning. Oh no, wait, that’s a bad thing. That’s a terrible thing! You’re supposed to be a parent and dedicate your every waking (and non-waking) hour to safeguarding this child from danger and death. What the hell is he doing in the goddamn oven?!

This, I’m sure, is not how parenting goes. It’s bloody awful, and hard, and yeah you’re probably going to screw a lot of things up for this kid, like, almost every day. But surely no parent or carer is negligent or maniacal enough to introduce a baby to an oven, right? Oh, okay, it’s just an urban myth. Phew. (Though, there have been cases of babies being killed in ovens before, sickeningly.) In Who’s Your Daddy you’ll be actively working to ensure it stays an urban myth, too. But it won’t be easy.

the baby is drowning itself in the bath tub.

Conceptually, Who’s Your Daddy is outrageous in its hyperbolic yet, beneath that, crushingly true reenactment of the parent-child conflict. That’s probably why it was funded on Kickstarter, will no doubt fly through Steam Greenlight, and has recently topped the hyperlink charts of Reddit. The pitch is simply this: “Who’s Your Daddy is a casual 1 on 1 video game featuring a clueless father attempting to prevent his infant son from certain death.”

One player is the father, alone in the house with his diaper-filling son, and doing his very best to ensure that he doesn’t kill himself while also doing his household chores (which grant special dad powers when completed). The other player is the baby, crawling on all-fours, and desperately seeking a means to avoid the father’s attention so they can suicide when his back is turned. The competition and the humor lies in the disparity of these two goals. While the father is distributing socket covers to prevent electrocution the baby is in the bathroom cupboard drinking the bleach. When the father is trying to put all the toys back into their big wooden box the baby is drowning itself in the bath tub.

Unfortunately, the current alpha version of Who’s Your Daddy doesn’t live up to the promise yet, as to be expected. But despite the janky physics and the obvious balancing issues the comedy of the game is already present. Seeing the baby and father wrestling control of the oven door and its various knobs is stacked with laughs. You can imagine the baby getting properly agitated and screaming “For goodness sake dad, I’m just trying to kill myself in peace, leave me alone” if it were able to speak, while the father is frantically trying to prevent what would undoubtedly be the worst thing to ever happen in his life.

There are two key points to make out of Who’s Your Daddy‘s automatic success. 1) Making light of such an awful and taboo subject (the death of babies) is certainly a viable if risky path to humor. 2) Being a parent, as wonderful as it can be, is a fast track to losing your mind.

You can vote for Who’s Your Daddy on Steam Greenlight. It’s first alpha version is available to download for Windows and Mac here.