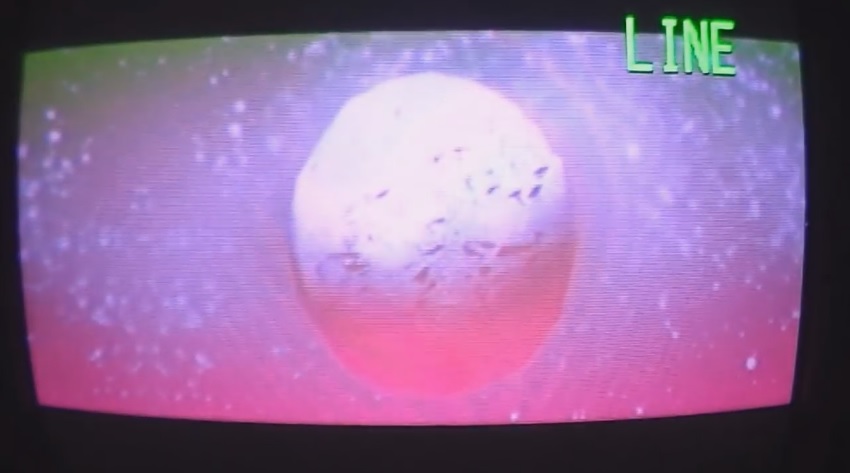 Zak Ayles isn’t budging. Sure, he’s released the first footage of his upcoming game Lioness at last, but it’s warped and degraded to the point that you have to squint your eyes and rewind it a few times to make any sense of it. In fact, it seems as if Ayles has transmitted the footage to a CRT monitor or, if not that, made an effort to replicate the look of one so that it judders, the scanlines tumbling about, the colors probably much more psychedelic than they actually are.

As you can see below, the video is titled “retrograde” and, at first, shows what appears to be an artificial moon spinning in a violet rendering of outer space. It looks like something out of a 1950s sci-fi TV show. We then transition to an upward shot of a building that glides gently into a side-on tracking shot that follows a man as he walks across a city block. Traffic whizzes by in the foreground, creating an ominous hum, and then music fades in with a distorted chime; a sound that crawled in from The Twilight Zone. The screen soon after becomes a tumultuous glitch-haze as if to say “listen to the fucking music.” And so we do.

You can be excused for not knowing what the heck Lioness is. Hell, you probably haven’t even heard of it before. The reason being that, after having doubled its funding goal on Kickstarter back in August 2013, Ayles has ensured that he and his game have only become impenetrably cryptic. Back then, Lioness was described as an “experimental adventure game about human connection,” one that follows a journalist called Eggbert Kirby as he researches an article on seven people who all mysteriously vanished. “Of course, nothing is as it seems and he soon befriends a nicotine addicted cat and unravels a plot involving time-travel, yakuza, and interdimensional coffee,” the Kickstarter page reads. You can see why people give a shit about this game.

However, updates on Lioness since its successful funding have driven those following it wild. They’ve included photographs of desktops and fragments of buildings, a storyboard featuring a talking black cat, and photocopied passages of texts about “strange forces,” all of it arriving without explanation. And all these updates are collected under titles like “Welcome to Paradise” and “I feel the.” Then there are the ones written to or about Mr. Kirby, the game’s protagonist, either as an email from who is presumably a fictional character, or stating his death in 1992 from “unknown causes.”

There is a single exception. One update is actually wholly tragic. It reveals that Phillip Lanzbom, an electronic musician who was helping with writing and design on Lioness, and who also created all its music, passed away due to mesothelioma on January 1st 2016. He was 25-years-old. Ayles has since made an archive of all of Lanzbom’s music, which you can download here, or through the mirror here. It’s all worth a listen.

There’s still no release window on Lioness, it’s very much a case of ‘it’ll be done when it’s done’, but you can at least check out the game Ayles released last year, im null. It’s a first-person online multiplayer game that’s as mysterious as everything else Ayles and crew have put out recently. It’s playable here.