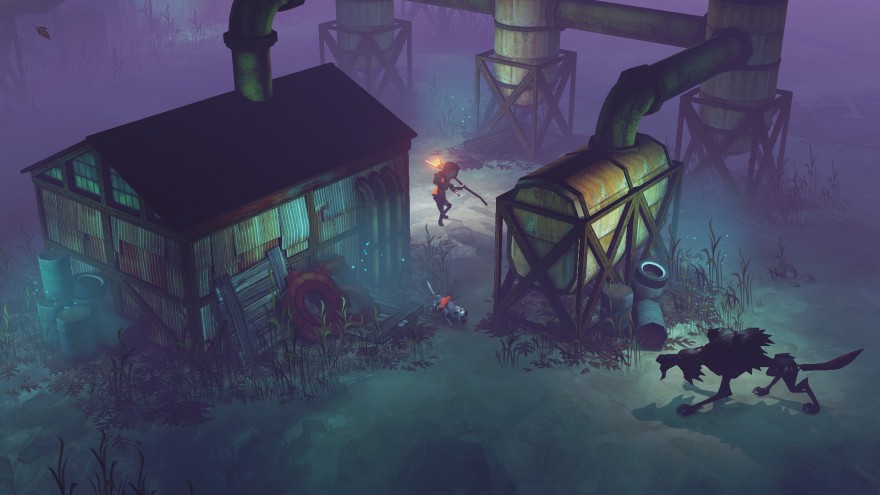 Title:
The Flame in the Flood

I can think of few landmarks more American than the Mississippi River. It carves a slow, muddy path through the states, branching out as various smaller systems and tributaries that form the vessels of the country. The Mississippi carries with it the stories of Mark Twain and William Faulkner, the verse of Langston Hughes, the sounds of the Delta blues, the steady rhythms of riverboat paddle wheels, and the ghosts of those claimed by its waters. Perhaps my own Southern heritage has colored my perception of the river to an overly-romantic degree. But there is a mythic current that carries the stories from Minnesota all the way down to New Orleans before spilling out into the Gulf of Mexico, leaving traces of untold tales like so much flotsam and jetsam scattered along its banks.

I don’t know if the river that drives the action of The Flame in the Flood is supposed to be the Mississippi, but I’m hard pressed to see it as anything else. The game drips with a backwoods atmosphere ripped straight from a riverside campfire tale. A picaresque float trip through the wreckage of a nation, The Flame in the Flood chronicles the struggles of a young woman named Scout and her canine companion Aesop. Making their way down a river to meet some vague end, Scout and Aesop stop only to forage or barter for supplies, hunt for food, or find a safe place to rest before heading back to their raft to continue on their journey.

A picaresque float trip through the wreckage of a nation

Part of what makes this journey worth taking is its difficulty. The Flame in the Flood constantly deals out challenges in the form of deadly rapids and meager supplies. And so it is that each attempt to conquer the waters of a flooded America is an exercise in stubborn resilience that, for me at least, ends with Scout’s death. Succumbing to either starvation or to wounds suffered after encountering a pack of wolves becomes a routine ending for each trek down the river. With each death, however, comes a stronger understanding of the river’s challenges. You also learn that any supplies left in Aesop’s bag carry over to the next attempt—encouraging you to frantically scramble through your pack to save the most useful items for the river’s next pilgrim.

Upon each journey’s outset, the river creates new rapids and obstacles; the various camps and outposts, too, adapt to the river’s new course, popping up in new places among the river’s islands and banks. It’s a clever manifestation of the old adage, “You never step in the same river twice,” here delivered with a folksy twang instead of Heraclitus’ prose. The Flame in the Flood begs for exploration while twisting away from the player as she attempts to explore every place she can. Navigating the river means making the difficult choice of where to embark, what to carry, and what to leave behind in that moment of acceptance when the fire goes out and the cold creeps in.

This steady loop of embarking, exploring, and expiring cultivates an ominous atmosphere that melds with rough textured designs of the characters and their ramshackle environments. With their asymmetrical faces and gangly limbs, Scout and the people she meets look like rough-hewn dolls carved from the ominous trees that stand guard on the river’s flanks. Chuck Ragan’s mournful and stirring soundtrack bellows out gruff thematic annotations designed to spur you onward and lament your inevitable collapse. Such a mixture of sight and sound creates a folklore parable of struggle and hardship in world that, in losing civilization, has regained its mystery.

I suppose that struggle alone is enough to buoy The Flame in the Flood, at least on a purely mechanical level. Though it may be my new favorite survival game, The Flame in the Flood seems uninterested in uprooting some of the thematic implications of its setting and atmosphere. The game invites comparison to American traditions like travel narratives, Southern Gothic fiction, or pioneer folktales, yet it never attempts to penetrate the heart of what makes such stories so compelling. With its rafting sections broken up by excursions into the wild, the game evokes the structure of Twain’s Huck Finn (1884), but only as a gameplay template. The freakish people Scout meets—feral children, strange old crones, half-mad merchants—carry the hallmarks of writers like Flannery O’Connor for purely cosmetic purposes. But there’s no attempt to dig into the guilty past of the territory or to make any assertion about the freedom from shackles of history. 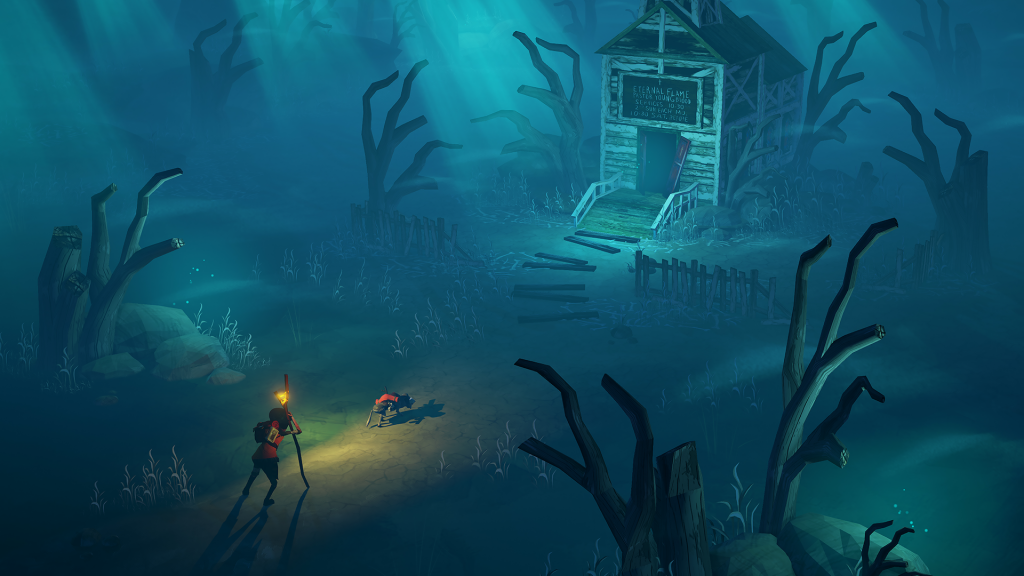 It seems like a missed opportunity, to hearken back to masterpieces of American literature and do nothing with them. Instead, The Flame in the Flood paints a picture of post-apocalyptic America without bothering with the more uncomfortable implications of what that would mean. Despite the brutality of the survival elements, the game’s America is a comfortable, sanitized one, from the charming character design to the pleasant music. It’s a game that ignores the struggles that inspired great American literature—the difficult legacy of race relations, the human cost of Manifest Destiny, the struggle for freedom from colonial rule—to instead use the hallmarks of such fiction as simple set dressing. Even as the river changes on the outset of each journey, the game offers a static picture of an America that never existed, more Cracker Barrel kitsch than Twainian epic.

Such omissions do not exactly hurt The Flame in the Flood. Its view of America is simple, but simplicity keeps the game focused on survival in a wilderness that refuses to be tamed. Though the river never captures part of the mythic grandeur of the Mississippi, maybe there’s something comfortable in the uncomplicated rhythms of Scout’s journey along its torrential currents. It’s enjoyable despite its difficulty, little more than comfort food with a bit of bite. And while there’s nothing exactly complex about it, I reckon there’s always a place at the table for some home cooking.