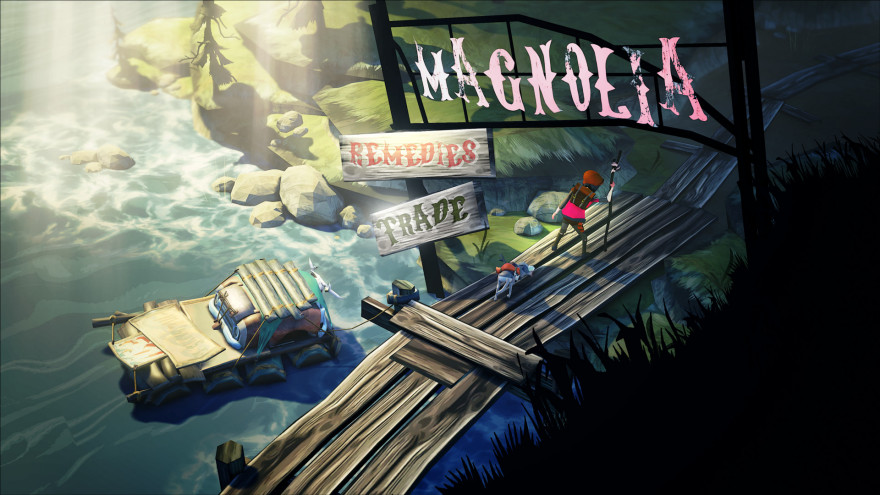 Boy, videogames sure do want out of the narrow, crate-filled corridors of their youth, nowadays! First-person hiking simulator Firewatch has been receiving critical praise all week, in no small part because of its beautiful renditions of the American Northwest. Now The Flame in the Flood, a game about a little girl surviving a post-disaster America, is also striking out for the wilderness with a release date: it’ll be out on February 24th for Windows, Mac, and Xbox One. But it isn’t emotional hardship behind Scout, the young protagonist of The Flame in the Flood; it’s torrential rains, which will be her death if she doesn’t keep moving.

As our Reid McCarter noted, protagonist Scout’s journey downriver mirrors the one taken by the archetypal character of Huck Finn. Scout’s raft is not wood, though, but the overturned shell of an automobile. This version of the American South is in ruin, even more than environmental stress and infrastructural negligence left it in the modern age.

a postcard sort of grandeur

Even considering that, it would be easy to mistake the wilderness of The Flame in the Flood for a postcard sort of grandeur. The music in its newest trailer is gentle acoustic porch-plucking. The art, too, is remarkably colorful for a game set after an apocalypse of one kind or another. Your dog wears glasses, for Christ’s sake! But Scout isn’t camping, she’s surviving, and the obstacles to that goal become swiftly apparent in the form of wolves, snakes, boars, and bears. Death is, as far as videogames go, relatively permanent, starting you back at the top of the river with a freshly generated world ahead.

Nowhere is the contrast between whimsy and menace more apparent than in the name the development studio has chosen for itself: The Molasses Flood! It sounds like a square you might land on in Candyland. The historical context is a bit darker, though: in Boston, Massachusetts, in 1919, a storage tank filled with molasses ruptured, and the resulting wave killed 21 and injured 150 more. Yep, it was called the Great Molasses Flood. I wonder if any of those tragic casualties were in disbelief as the 40-foot wave of sugary syrup rushed toward them, wondering how such a cartoonish threat could be so fatal.

You can find out more about The Flame in the Flood on its website.