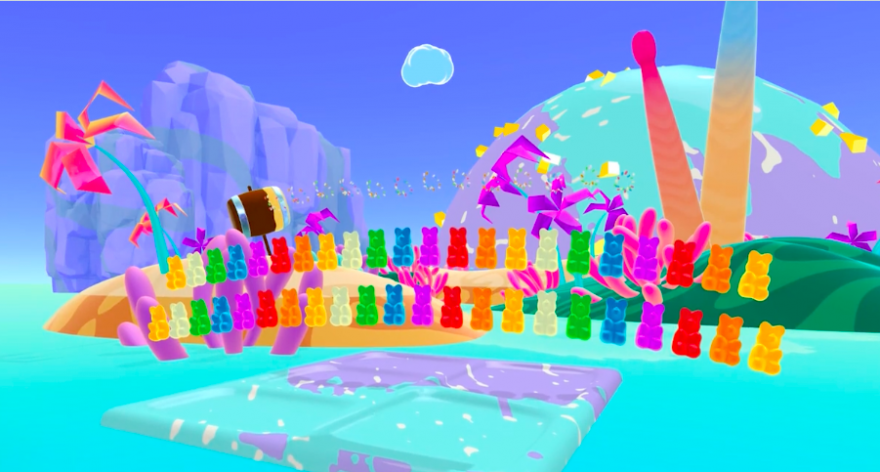 The creative playground is under siege. Land scarcity, underfunded municipal governments, and rising costs are all impediments to constructing innovative public spaces. Moreover, parents’ concerns—some more reasonable than others—about their children’s safety increasingly shapes playground design. The confluence of these factors can produce interesting results, but the odds are against such outcomes.

virtual reality may be the way forward

If communities cannot build interesting and stimulating parks on city blocks, where can they be built? One possible option is virtual space. That, at least, is a possible reading of George Michael Brower’s Playthings: Musical VR Playground. The experience is a mad, neon playscape. Hot dogs float through the air, unmolested by gravity. (Their mustard, however, remains attached.) Drums take on the appearance of gummy bears that have moulded from jello shots. In point of fact: everything—even the hot dogs—can be used as a drum. You can bash away at these instruments using handheld controllers. And why shouldn’t you? It’s not like anyone else can hear the racket you’re cooking up.


The public playground’s enduring playground is in large part due to its role as a low-stakes environment to which each participant can attach their own significance. Low-stakes spaces do not need to be sanitized and tame, but that’s where the built environment often falls short; it confuses total safety with the lack of risk. If interesting, low-stakes playgrounds can’t be built in physical space, virtual reality may be the way forward. You can be as weird as you want in VR, bashing away at a neon foodscape for as long as you want. The eye rolls of onlookers cannot be seen while wearing a headset. A virtual playground may lack some of the sociability of its meatspace antecedent, but Playthings demonstrates that it can have advantages to spare.