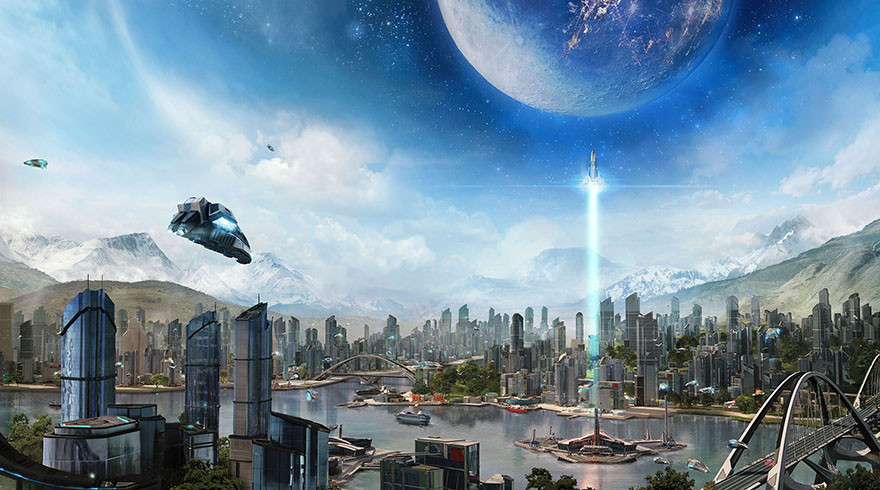 Beginning with its first release, Anno 1602: Creation of a New World (1997), the Anno series has distinguished itself from a crowded field of strategy games by making economic competition, rather than military action, the focus of its simulation. Though Anno looked to the past for the first decade of its existence, the series turned towards the near-future with the excellent Anno: 2070 (2011), which tread new “historical” ground in familiar, materialist footwear. Anno 2205, the latest release in Ubisoft’s dependable series, picks up where 2070 left off; humanity is on the verge of interplanetary colonization and a rush for valuable lunar land is underway. Conflicts are inevitable, but as Anno always has it, it’s the supply lines and not the front lines where wars are won and lost.

Most of Anno 2205 involves designing and managing a trio of cities in three distinct regions: a temperate coast, a windswept arctic archipelago, and a lonesome lunar plain. Slight mechanical variations on the design of each zone’s city planning—arctic settlements must be designed around heat from factories, while lunar habitats require protection from space debris—give each region a relatively distinct and welcome sense of place and play. As the player erects factories and negotiates trade agreements, Anno 2205 shows itself to be adept at revealing and representing the intricate web of interdependencies between its regions: one product might be demanded on the moon, but can only be manufactured on the coast with materials from the arctic. Micromanagers rejoice: balancing production, distribution, and consumption is an elegant task and Anno 2205 deserves credit for reminding players how truly global (and, in this case, more than global) the complex exchange of commodities really is.

But so what? Fans and critics of strategy titles throw around the only-half-joking insult “Excel: The Game” because most believe that optimization and number-crunching don’t make for an inherently meaningful or, frankly, enjoyable game, even if the majority of games contain at least some element of them (sometimes it’s as simple as comparing the stats of two items). When games demand computation on the player’s behalf, it’s usually because the numbers-game is made meaningful by something else, whether it’s a rich sense of atmosphere, a compelling narrative, or simply an edge in combat. And as a general rule, the more number-crunching a game demands, the more justification it tends to need. Consider: Eve Online’s economic system is far more complex than anything in Anno 2205, but Eve’s sense of inhabitation and investment (financial and otherwise) more than justifies hours spent speculating on virtual commodities and calculating returns.

War, too, has become perfunctory.

In other words, it’s one thing to design a simulation, but quite another to make the player care about what’s being simulated. And on this count, alas, Anno 2205 falls desperately short in just about every way imaginable. The underlying simulation is relatively sophisticated, yes, but it does little to convince the player that the flow of goods between regions actually matters. Anno 2205’s narrative—something about free market lunar separatist space pirates—manages to pull off the the unenviable combination of being both utterly forgettable and completely mandatory (unlike previous entries in the series, Anno 2205 has no sandbox mode). War, too, has become perfunctory. Periodic naval skirmishes (mercifully, only some are necessary) are little more than click-and-wait dust ups and the segments rank among the least inspired war games in recent memory. And Anno 2205’s cast of CEOs and consultants—distinguishable mostly by their half-assed accents—are so profoundly unoriginal that I simultaneously felt like I knew each of them from somewhere yet never wanted to see any of them again. If Anno 2205 appeared more thoughtful, the identical models for each of its citizens might read as a comment on the fate of individuality in an unencumbered free market. As it stands, though, it just comes off as lazy. Everywhere the player turns, there are unavoidable signs that someone couldn’t be bothered to give a shit.

What might be most disappointing, though, is the sheer lack of atmosphere in what is otherwise an environment ripe for speculation on the human future. Anno 2205 is firmly in the realm of the capitalist u/dys/topia; personal identification no longer centers on the geo-state (as in Civilization: Beyond Earth) or ideological communities (Sid Meier’s Alpha Centauri), but on the corporation. How we look and what we think is all subsumed by where we work and what we buy. Anno 2205 is not the first to suggest that the corporation will supersede the nation-state as a central piece of of social identity (“The Osirion of Sonmi 451” from David Mitchell’s Cloud Atlas comes to mind), but among such works Anno 2205 might be the least interested in explaining how it came about or why it matters at all. A near complete absence of backstory combined with the pedantic functionalism of Anno 2205’s writing (e.g., “Hi! Come trade with me at the depot on the left side of the map!”), strip what could be a meaningful take on the future of humanity of any of the kinds of provocation needed to inspire further thought.

In fact, beyond due diligence, the only reason I kept playing Anno 2205 was its spectacular art direction. The Anno series has always made a point of flaunting its graphical prowess, but Anno 2205 takes the visualizations of its utopian cities to the extreme. The skyline of my coastal city—a cascade of glass and steel that looks like someone gave Skidmore, Owings & Merrill free reign and an infinite budget to remake Manhattan—is among the most breathtaking amalgamations of virtual architecture I’ve ever seen. So compelling, in fact, I often found that the most compelling reason to optimize my production and balance my supply chains was the raw aesthetic appeal of watching my seaside settlement blossom from a cluster of prefab houses into a first-rate metropolis, home to millions of (identical) workers.

The only reason I kept playing Anno 2205 was its spectacular art direction.

Still, glorious though Anno 2205’s cityscapes may be, a game that justifies the banality of numerical mechanics through visual sensation alone is inevitably one that provokes the question of whether or not it needed to exist at all. From this respect, Anno 2205 might have more in common with Photoshop or Illustrator than with its predecessors; for me, its most compelling purpose wasn’t doing something, but making something. Whether or not that makes for a fulfilling experience is an open question; that Anno 2205 could be so much more is not.