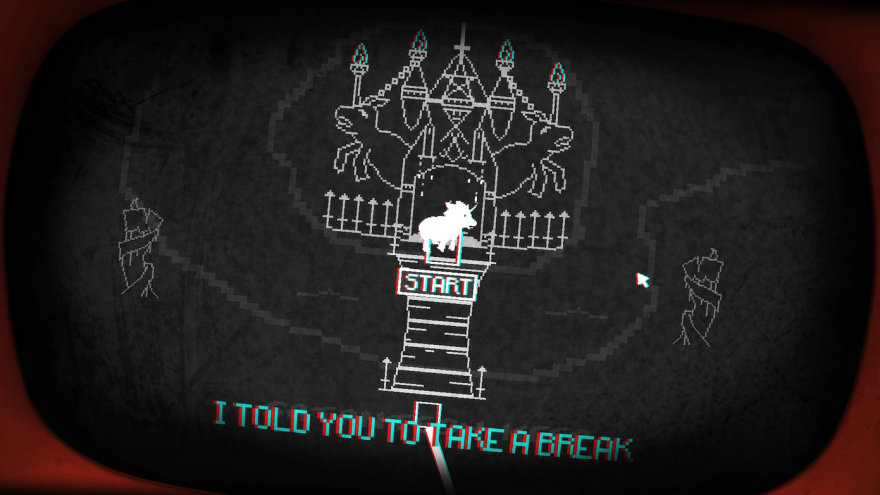 What do you see when told to imagine a videogame titled “Pony Island”? Verdant fields of grazing horses, foals nestling by their mothers, others leaping on spindly legs? Sorry, but I have to break this to you now—a game called Pony Island exists and it is nothing like that. The title is deliberately misleading. It’s a game that’s made to build up your jolly expectations and then crumble them, nastily, right in front of your face.

As horrendous as that sounds, stick with it. The creator of Pony Island compares it to 2012’s Frog Fractions which, if you’ve played it and peered behind its illusory curtain, tells you almost everything you need to know about Pony Island. In short: not everything is as it seems.

there’s something not right…

For me to explain Pony Island—which is a task fret with attempts to avoid spoiling it—you need to know that there are, in fact, two Pony Island games. One is the entire game itself that you download onto your PC and begin playing. The other is found inside that game and is only a part of the entire experience. To wit, this second Pony Island is a dull, one-button game in which you make a horse (well, a unicorn, to be precise) jump over hurdles. You do this over and over. It’s meant as a spoof of one of those soul-sucking browser games that appeal to that natural inclination we have towards meaningless progression. However, you’re supposed to get bored of it, and fast.

I don’t feel too bad in essentially spoiling that part of the game as, for starters, it is only the beginning of what becomes a web of reveals that eventually make that initial casual game encounter seem tiny. It’s a semi-detached house in what becomes a metropolis of intrigue and cryptic puzzles (and also faux-glitches). Not to mention that it’s clear, even before you’ve started to play the Pony Island game inside Pony Island, as it were, that there’s something not right… something more going on here. There’s an ominous hum, the pixels are a deathly grey; the game is falling apart before you’ve even started; aesthetically, this isn’t inviting, but in an effect akin to reverse psychology, that the game doesn’t want you there or isn’t ready for you makes it more appealing. There’s a thrill in being the intruder.

But where Pony Island really begins is at the Start menu. It’s an ordinary-looking Start menu. Three options: Start Game, Options & Help, Credits. You wouldn’t suspect a thing. Move your mouse over to ‘Start Game’ and give it a click, however, and with a flash of static it’ll turn into the word “< ERROR >”. This is a perfect synecdoche for Pony Island. You see a typical-looking component of a videogame, but upon trying to interact with it, it breaks or otherwise distorts into something else. Everything is a trickster; part of a puzzle that could have been designed by the devil. And it was. But, oh, I’ve said too much…

You can purchase Pony Island on Steam.