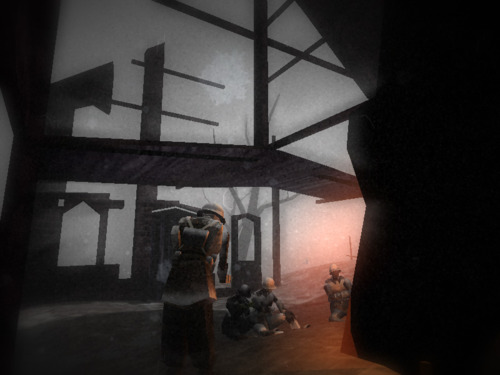 The Snowfield feels like a nightmare. You’re a soldier on a snowy plain that seems to stretch on until infinity. There’s the sleepy, slow crawl with which you move around, between other mute soldiers and a ruined manor with a raging fire. Step away from the fire, and you can feel yourself move just a bit slower, ice starting to creep into your vision from the edges. There is nothing to do, just wander around until you die. If you haven’t dreamt of freezing to death before playing the game, you will after.

This is not an uncommon reaction, Matthew Weise and Jason Beene inform me. They’re the heads of the project at MIT Gambit. The program acts like a game development boot camp with half the students coming from MIT and other local schools, and the other half coming from Singapore. Weise and Been give the students guidance and goals, shaping and overlooking the project. It’s paid off: the game has been named a finalist in the student showcase. Presented here is an abridged version of our conversation, arranged by topic, to better understand how The Snowfield got to be so evocative.

JB: The way we approach that was that we had this rapid brainstorming session where we asked the students to come up with, either from there own experiences or their own memories. Just really evocative settings. We would have up on the wall…oh geez, outer space, battlefield, purgatory, burning building. Things like that, right? Places where you have some sort of catalyst for conflict or action.

MW: A space that implies drama

JB: After we have 5 whiteboards filled with these one or two word settings, we had the students take turns and starring the most interesting ones, and combining up to three of them. We had three different groups of three words together that we started prototyping. This group, for what it’s worth, was “last man standing” “battlefield” and “purgatory.”

MW: But it wasn’t freezing.

On How to Build a Fire

JB: We didn’t want any artificial barriers. The freezing mechanic was a way to limit the playscape, but still make it feel open world.

MW: We wanted functional believability to the situation, and that was really important to us. It’s funny that freezing became a central element of the game. Originally we wanted it because we didn’t want walls. We wanted you to never reach the edge of the world and it is, in fact, impossible in the game because you’ll freeze to death in the game.

At first there was a lot of complicated AI stuff. Not compared to a aaa game, but when you have 10 people who’ve never made a game before, in 8 weeks, it’s definitely a challenge. The interesting thing to me is, the freezing was put in there for a variety of reasons but I think when we got 2/3rds through the summer and we did the first playtest, we wanted to have all this AI and emotion in it. But everybody who left the room said, “I don’t know if there’s a story there, but, man, I feel cold.”

The freezing ended up being the main thing that made an impression about people early on in playtesting. So rather than saying, “Let’s keep going,” it was kinda like, maybe that be what the game’s about, maybe that can be what drives all the drama. Maybe we can filter everything through that and make that the center of the experience.

Would having more AI — maybe it would distract. Maybe there’s something direct and simple and human and visceral about just freezing to death and have everybody else being in the same situation.

“At least there are no raptors in this one.”

JB: There was that great tester, he must’ve been 11 years old. Remember? During one of the open houses?

MW: That was a personal satisfaction to me.

There was actually a German made game, and it was a bit similar. It was first person and you were in a trench in World War I and it was called…I forget…something 1914. It was actually very atmospheric, kind of similar to our game in some ways. I’m in a trench and I’m like am I going to find another solider, is he going to be dying, is there going to be a letter, but then dinosaurs show up.

JB: it was like that kid, that 11 year old kid, went and playtested this game and said, “Where’s the dinosaurs?” Clearly, this game is for him.

You can play The Snowfield here.