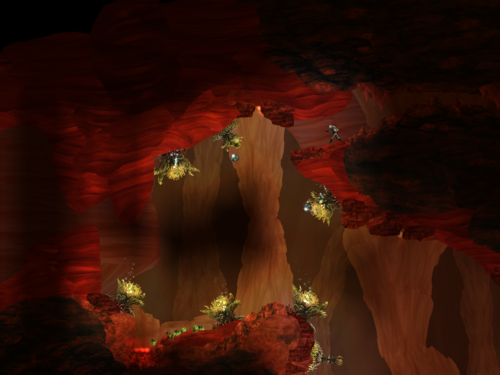 It’s somewhat intimidating when Randy Smith starts talking about Mars. Part of it is just how much he knows — he has clearly done more than just skim the wiki. But most of it is his obvious passionate enthusiasm, the way he manages to make you feel as if Martian ecology is something you really need to care about. It’s clear he and David Kalina have been living and breathing Mars while making their latest game, Waking Mars.

The game is the latest iOS game from Tiger Style, a “distributed collective” headed by Smith and Kalina. It’s already received positive attention, with an IGF nomination for both best audio and best mobile game (although the duo are no strangers to the IGF: their last game Spider: The Secret of Bryce Manor won Best Mobile Game in 2009) The game, an “action-ecosystem adventure”, has you playing as the first astronaut on Mars, exploring its many caverns, making contact with strange alien life, and creating an ecosystem for a long-dead planet. I decided to talk to David and Randy about Mars, gardening, and Grand Theft Auto 4.

Why the title “Waking Mars?”

DK: In the game, you will revive a long-dormant planet. I wonder if anybody will consider the consequences?

The game has been described as an action-gardener. Can you elaborate a bit more on that? Do you guys do any gardening? Did you feel it informed your design of the game?

DK: “Action-gardening” was a metaphor we started using earlier in the project to describe some the systems we were building and give ourselves a framework for making design decisions. Like many catch-phrases, it’s a bit of an over-simplification, but people do seem to latch onto it!

I’m personally far too impatient for gardening, though I’ve always loved the idea of it, and perhaps it is my impatience that tends to drive me back towards action dynamics. The gardening (if you want to call it that) is “action” in the sense that the metaphor is super accelerated and exaggerated and demands timing and precision of the player. You may be cultivating a little garden of life, but the lifeforms grow to maturity in a matter of seconds, and they reproduce extremely quickly — everything is done on an action-timeline; you experience and play with cycles of life in minutes, not months.

RS: Waking Mars is definitely an exploration game, but we mean that in many senses. Of course you explore a vast network of exotic alien caves and discover beautiful natural formations, mysterious structures, habitats of strange lifeforms, natural resources to take advantage of, and so forth. But it’s also very much a game where you explore the game systems themselves; you essentially research the alien life to determine what behaviors and properties they have so you can figure out new ways to interact with them to achieve your goals, or to find obscure secret responses they have to certain objects, and so forth. We buried interesting behaviors in the creatures that you can experiment to find, just like we hid interesting objects in the caves that you can explore to find.

Along those lines, I think it might be true that you could make that case that all gameplay is exploration gameplay. Even if you don’t move anywhere physically, you are experimenting with the systems to learn how they work. For example in a game like Tekken you explore by trying out your various combat moves, using them in different situations, learning which work best in combination against which opponents. The way I think of it is that everything we designers put into a game – the physical and systemic environments and the tools the player has to examine them – is called the Possibility Space of the game, and the way players interact with our medium is to explore that Possibility Space. The Possibility Space is the work of art that we create, and through exploration the meaning of the work is revealed, as the player gradually gets to know the game and what it adds up to.

I hear that you did a ridiculous amount of research on Mars during development?

RS: I really felt I needed to understand that if we were going to depict Mars with an alien ecosystem. How that could be possible, what it would’ve been like had it evolved. It felt without that strong foundation every single piece of creativity might be false. Falsehood is really bad when you’re doing creative work, so always better to come from honesty.

I spent a lot of time trying to figure out a scenario where Mars had supported life in the past. It turns out that this is actually a very very active piece of speculation in the scientific community, but because the way they talk about it, and the process of how science works, people aren’t going to come out and tell you they think about this and show the evidence they gathered. There’s a lot out there. Mars currently does not have an atmosphere or tectonic activity, but there’s evidence that it did in the past. There are some lingering molten core type stuff, and that’s important because a molten core creates an electromagnetic field like Earth has and that field deflects the solar wind coming from the sun and when you can protected from the solar wind you can sustain an atmosphere. There’s plenty of evidence that that could’ve happened in Mars past. From the scientific perspective everything I just said would be wild and crazy speculation, but on another level they’re just searching for the smoking gun evidence to start talking about it.

I feel like we’d be wasting people’s time if we made things up. When you really get into our game and understand it and feel connected. It comes from something real enough that it doesn’t feel like a total waste of your time. We’ve painted a picture worthy of discussion.

Can you talk more about this idea of falsehood? False in what way? Do you have any examples of a piece of art that feels disingenuous in a way?

RS: It happens all the time: we’re just holding ourselves to a higher standards and I think a lot of people do. One example, I’ll be critical of a game that is amazing and really strong and a little bit of a sacred cow, but also has a little bit of this going on as a legitimate criticism, and that game is Grand Theft Auto 4. On the one hand it has this really involving story told through cutscenes, and on the other hand it has this sociopath simulator where you drive around the city with no regard for human life and you’re encouraged, almost to the point where you have no other point of action, to be completely reckless. And those don’t resolve. There’s a dishonesty there. The Niko you’re playing in the cutscene is disingenuously separated from the Niko you’re playing in the game. It loses a bit of integrity. It might’ve taught us something more or presented a more interesting perspective on a character.

The one thing I like about honesty is if you’re really attached to it and you’re really push yourself to be devoted to it, you wind up finding little pieces of art even if you weren’t trying to accomplish it. These little perspectives that resonate or are interesting or meaningful. If you cop out too often and just take the easy way out, they don’t show up, or they’re clearly false.

Have you stumbled upon one of those artful scenes while making the game?

RS: There’s one in particular where there’s an enormous cave chamber, incredibly huge, much to David’s dismay because he had to support it in terms of performance. When you get in there, it’s barren, nothing’s alive, but when you leave it’s just crawling with plants and animals. A plant is eating an animal and it spits out a seed which than another plant picks up and throws and lands and buries and a thing flies by and grabs something from something else and the whole thing is in constant state of motion and flux. One of things I’m proudest about is that it’s a beautiful picture of an ecosystem that actually stabilizes and becomes self-sustaining. It actually thrives and continues to evolve and interact while you sit there and interact with it or just sit there. That to me feels like real ecosystems. It has a sense of peaceful beauty to it.

Waking Mars will be available in the app store Thursday March 1st.