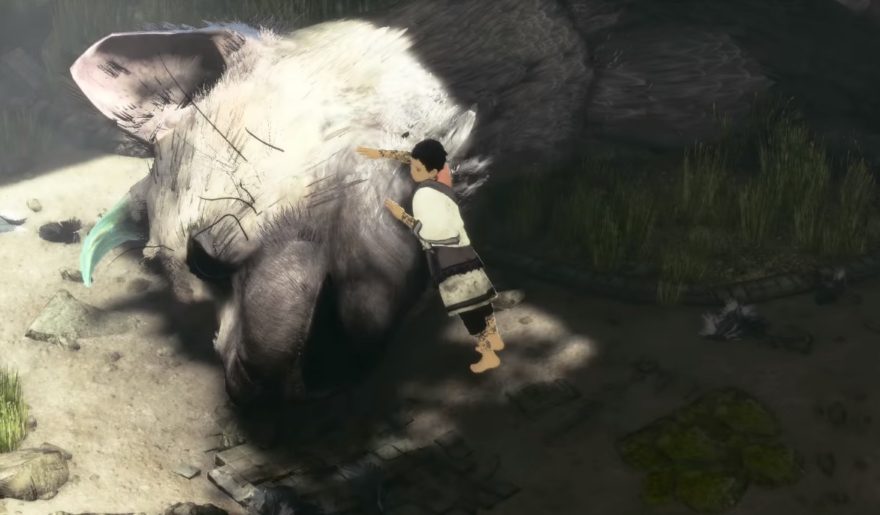 I already want to cry. No, it’s not that The Last Guardian has a proper release date of October 25th now—which, you know, at last, it’s been 11 years since Shadow of the Colossus (2005) for crying out loud. It’s that the first minute or so of the game’s E3 trailer features the many whines and sobs of Trico while wounded or otherwise upset. I can’t take it. Poor thing.

This giant bird-cat-dog is initially frightened and fearful of the tattooed boy that we’ll be playing as, which is unsurprising given that it’s found chained up, isolated in a dingy cove made of stone. The boy saves it and, over the course of the game, the pair bond and become friends, I guess. That said, the game’s director Fumito Ueda did recently say that the “role of the creature is ambiguous,” further implying that it’s always going to be dangerous and not always a friend to rely upon.

“Are your wings broken?”

One of the reasons for that may become clear in the new trailer. Turns out that Trico isn’t the last of its kind, which is something I’m sure most of us had assumed given the game’s title. In the new trailer you can clearly see that there is another bird-cat-dog, it landing in front of the boy and stalking him like a fresh piece of meat. Oh, and this one’s horns are intact, whereas Trico’s have been broken off, presumably by its previous captors. Whether Trico will stand up for the boy and fight off its own kin or turn on him is a mystery we’ll have to settle in October.

But let’s get back to crying, shall we? After that encounter in the trailer, gentle piano kicks back in, the title swells into view, and Trico is seen rearing up in distress from up high overlooking a landscape, flapping its meager wings. “What’s wrong?” the boy asks. “Are your wings broken?” My heart! It’s a telling detail when combined with the beginning of the trailer in which we saw a large, raised circle of earth that surrounds the location the boy and Trico are trapped in—it seems the only way out of there is to fly over the top as the drop would probably kill you, and digging would take a long time.

The one other detail shown in this trailer is the knights that chase the boy and Trico around the raised wooden walkways and stone structures—they seem to be ancient and ghost-like, functioning to add further peril to situations when the boy is separated from Trico and therefore unable to fully protect him.

The Last Guardian will be available for PlayStation 4 on October 25th.