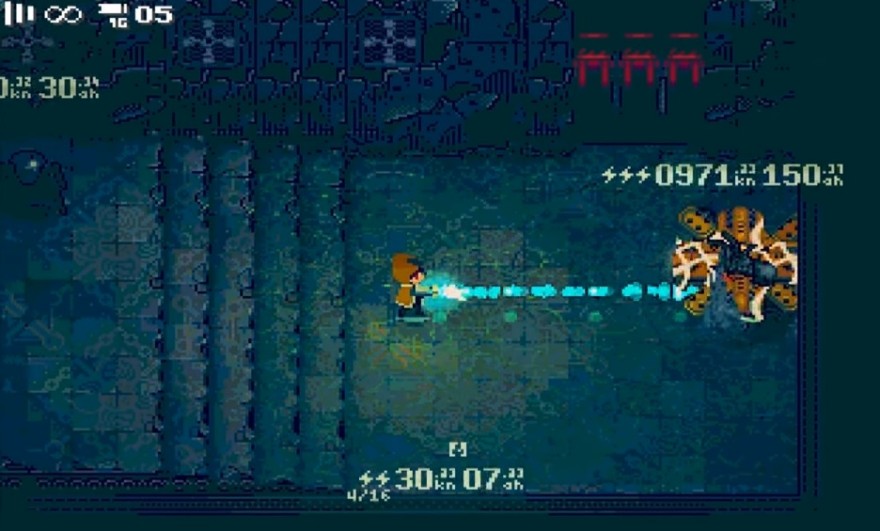 After three months of radio silence, over a year of no footage, and a little over three years since its successful Kickstarter at the tail end of 2012, moody pixel-art game Radio The Universe finally has more to show us. Specifically, it’s a new video that shows off one of its boss fights. Since it was last seen, the game seems to have undergone another mild aesthetic overhaul, introducing new player animations and interface elements that better represent the used future setting that earned it attention in the first place.


As the clip begins, the player is alone in a dim room, their life bar having been replaced with a radio frequency befitting the title. A beep sounds in the distance, a fluorescent light flickers on and off over a nearby ladder. The room is basked in the green glow of a clunky CRT monitor, complete with scan lines. It reminds me most of Ridley Scott’s Alien (1979) at this point, but it’s not long before the player is teleported to a sunken chamber below and attacked by a four-legged robot more resembling cyberpunk anime Ghost in the Shell (1995).

From this point, a few more changes are shown, as enemy health bars are now also represented in radio frequencies, and the player fires an actual gun as opposed to the more abstract energy bullets of previous clips. Their holographic shield is also smaller and looks particularly more dingy than the old design, flashing intermittently and refusing to work in water. The general feel here is one of corroded, half-broken technology that is somehow still miles ahead of our own, appropriate for the ancient yet wondrous sci-fi ruins the game will task us with exploring. There’s also, like, a bullet-counter in the top left corner now.

doubling-down on its melancholy identity

Some of these changes could perhaps be written off as simply being additional gear collected by the player rather than replacements for what had been shown off before, but the overall tone of the new footage still presents a menace that wasn’t as clear in previous, more colorful showings. This isn’t new for the game, as it was always intended to be “sinister” and “offbeat,” but as development has progressed, it appears to be doubling-down on its melancholy identity.

Radio the Universe is due to come out sometime later this year, following up the recent release of the somewhat similar Hyper Light Drifter. But despite both games being heavily inspired by the The Legend of Zelda series and featuring combat and exploration based on precise dashes, slashes, and gunshots, this new footage makes a compelling case for Radio the Universe’s continued relevance. Not only does it have the mysteries of its own ancient techno-ruins, it seems to take a slower, more methodical approach to unpacking its evironments. It’s a blend of dingy technology and extended, lonely struggles against ancient machines, and its signal calls back to late 20th-century imaginations of a future gone wrong. After three years, Radio the Universe is broadcasting as loud as ever, intermittent as it may be.