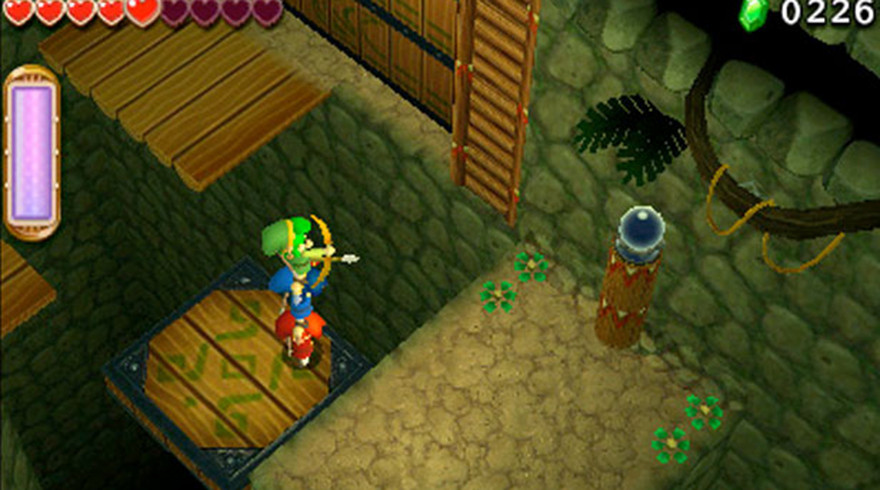 Tri Force Heroes (2015) works in the spirit of Four Swords Adventures (2004), but is of an entirely different moment in gaming culture. Four Swords was about sitting on the couch, fending off enemies and solving puzzles in person. But two things happened since 2004: I got older and gaming got more solitary. Why? The internet is the answer to both.

If Heroes is meant to be a corrective to the lonely nature of Zelda—the multiplayer answer to the single-player quests we know so well—it merely takes all of the pleasure of mastery that attends a Zelda game and distributes it among three capable players, who are then immediately rendered incapable by being forced to work together. The puzzles in Heroes are, in a word, obvious, and that insult stings a lot worse when the only thing keeping you from solving it is the people you’re stuck playing with. Playing Heroes feels like I imagine being a climate scientist testifying before the House of Representatives would: the answer is clear and immediately before you, but one of these assholes just keeps throwing you into the ravine.

I’ll concede that it’s possible Heroes’ random assignments could work if you play with a team over a long period of time, but the turnaround was such that I would get a new group almost every level, requiring us to generate new conventions for teamwork from round to round. While I appreciate Nintendo’s efforts to make a sign system for Heroes, trying to strategize about teamwork through GIFs is predictably disastrous. Fist pumps as “hooray” is clear enough, as is the “help! over here!” symbol, but what of the hopelessly polysemic Link-with-quizzical-expression? Are you just shouting your uncertainty into the void? Is this Tri Force Heroes for “existential crisis?” To get a sense for this, imagine trying to write an essay in ASCII or tell your partner where you think you should go for dinner in semaphore. Now do it while you’re fighting monsters, shooting crystals, lighting torches, etc.

To get a sense for this, imagine trying to write an essay in ASCII

But Heroes’s oddest design choice is surely its violation of a Zelda tradition since time immemorial (i.e. 1986): Link can’t jump. If Link could leap over a rock or hop up on a ledge (in the way he can nevertheless jump-attack with his sword), 50% of the game’s puzzles could be avoided. But he can’t so they aren’t—and they are so he can’t; it’s rather self-reinforcing. And, as obeisant to videogame illogic as this may be, we dutifully accept it. Link can’t jump.

Before you’re scandalized, Heroes doesn’t allow any of its three Links to jump. But it does fundamentally change the series’s level design to make seemingly every room into this three-layer cake, where you have to get your friend to come over and stack up into a little tower so the person on the bottom can throw the top two onto a slightly higher ledge, and the second can throw the third onto the highest ledge, so they can go smack a switch and you can get on with your lives. Each level is designed for a game with a character who can jump, but Link can’t jump, so elementary platforming is rendered as tedious stacking, throwing, and re-stacking/re-throwing as people continue the stream of tiny fuckups that constitutes an hour spent with Heroes.

And yet the most frustrating thing about Heroes is that the problem it addresses doesn’t even need to be solved. Zelda’s solitariness isn’t lonely. It’s directly in line with the tradition of the epic (if somewhat scaled back for our postmodern skepticism of metanarrative). But really: Link is the hero of time, his people, the chosen one, The Hero with a Thousand Faces. His actions are world-historical. His value as a trope is directly linked to his unique (and I mean this in the sense that there is exactly one of him in a given game/diegetic time) heroism. The pleasure of the romance and the fantasy comes from the individual defying the odds, systems of power, history, etc. Splitting the responsibility for that action across three doesn’t make it more fun; it makes it less meaningful.