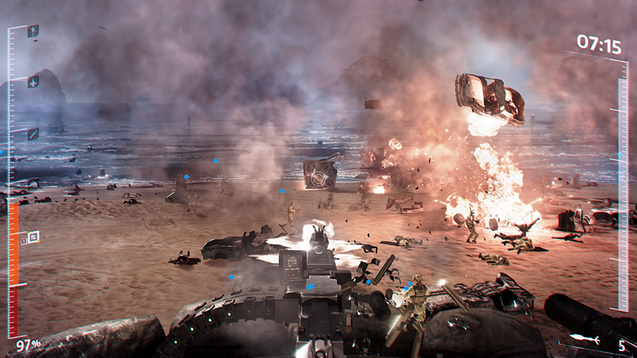 Destructive Creations does not support ISIS. There is no reason to believe anyone ever suspected otherwise, but the developers behind the quasi-genocidal civilian shooter provocation that is Hatred (2015) aren’t taking any risks. In a Steam post, they say their latest game, IS Defense, is their “personal veto against what is happening in the Middle East nowadays.”

Let us briefly set aside the fact that “what is happening in the Middle East nowadays” is not synonymous with ISIS, which is a concern in much of North Africa as well as Nigeria, and discuss how IS Defense exercises its veto. In short, it does so by compelling you to shoot everyone in sight. There’s a backstory, sure, but IS Defense is fundamentally a game in which you man your NATO-assigned post with a machine gun (and possibly rocket launcher) and fire away. That’s it.

About that backstory: The game takes place in “a politically-fictional 2020”; ISIS has taken over North Africa and is planning to launch an attack on Europe; you are called upon to “defend the old continent.” In a narrow sense, that means manning your post and defending the continent using all the weapons at your disposal. In a broader sense, what on earth could this possibly mean? If IS Defense is the symbolic veto against ISIS that Destructive Creations says it is, why wait until 2020 before opening fire? Why, for that matter, wait until ISIS has seized control of North Africa and is threatening Europe before taking action? Even if you believe that non-white lives are cheap, as IS Defense gives every indication of believing, this seems like a poor strategy. IS Defense is not really a narrative veto against ISIS; it is simply an opportunistic excuse to use a bunch of military gear.

IS Defense isn’t even about ISIS, for that matter. Sure, it uses the name as a pretext, but that’s about it. There is no indication of ISIS’ motivations other than an allusion to its “genocidal understanding of the world order” in the game’s Steam blurb. This is far from Destructive Creations’ dumbest statement. IS Defense, however, makes no effort to differentiate between groups with arguably genocidal understandings of the world order.

The games’ basic scenario has less to do with fighting ISIS than the fight against the Axis powers during World War II. More specifically, its “politically-fictional” premise is largely rooted in the war’s North African campaign. The Allied capture of French North-Africa in late 1942 as part of Operation Torch and Tunisia in 1943 established a foothold from which the Italian Campaign, beginning with the invasion of Sicily, could be launched. In a sense, this experience established that one could invade Europe from North Africa, lending a small amount of credence to Destructive Creations’ scenario. Yet one of IS Defense’s great ahistorical ironies is that the game’s near-future version of ISIS is actually modeled on the actions of the Allied powers.

one ought not confuse political incorrectness with mere stupidity and cynicism

What does IS Defense’s version of ISIS even want? Genocide, in short, but that’s about all the game has to say about that. In this respect as well, the game might as well be billed as World War II with new labels. It is, however, trivially true and uncontroversial to note that ISIS is not the present-day incarnation of Nazism. In Europe, the counterterrorism analyst Harleen Gambhir notes, “The Islamic State’s strategy is to polarize Western society — to ‘destroy the grayzone,’ as it says in its publications.” The end goal of this process is to prove that Muslims cannot coexist with the West. (Muslims overwhelmingly reject this theological interpretation.) IS Defense largely elides ISIS’ particular motivations. Insofar as the game has anything to do with ISIS, it is acting out the Islamic State’s ambitions of a quasi-civilizational conflict that precludes any possibility of coexistence. If that’s a veto, one can hardly imagine what Destructive Creations’ endorsement of ISIS might look like.

IS Defense is an interpretive trap. It seeks to bait critics and players into proclaiming that the game’s opposition to ISIS has gone too far. There is probably nothing its developers would like more than for the game to be chastised for its political incorrectness. At the time of Hatred’s release, PC Gamer noted that the Destructive Creations’ website included the following statement: “These days, when a lot of games are heading to be polite, colorful, politically correct, and trying to be some kind of higher art, rather than just an entertainment – we wanted to create something against trends.” Much of the early reaction to IS Defense on Steam suggests that we are experiencing déja vu all over again.

IS Defense’s primary moral dilemma—insofar as it has one—centers on when the use of force is justifiable. There are plenty of controversial arguments to be made with regards to this subject—arguments that, by some standards, are politically incorrect. The Bush Doctrine of anticipatory self-defense is controversial in this manner, as is carpet-bombing, or endless drone warfare. One can argue that the ends justify these means (here’s looking at you, Madeleine Albright) but such arguments accept that those particular means have adverse effects. A politically incorrect argument suggests that it harms while acknowledging being politically incorrect and unpalatable are necessary to achieve some broader goal. (This narrower interpretation of political incorrectness implies that the mere hurling of epithets is not political incorrectness; Let’s let words such as racism and bigotry do their jobs.)


The entire premise of IS Defense’s “politically fictional” universe, however, precludes the trade-offs inherent in politically incorrect arguments. The deck is so heavily stacked that there are scant harms with which to reckon. The NATO-affiliated protagonists is standing on European soil shooting at invaders who have come from overseas with genocidal ambitions. Pacifists may object to this scenario, but Destructive Creations has basically recreated the textbook justification for the use of force. Supporters of public international law and the UN would find little to object to in this premise. Suggesting that a nation defend itself against armed invaders is categorically not politically incorrect.

As anyone who has turned on a television in the last year knows, there are plenty of controversial and politically incorrect suggestions for countering the threat of ISIS. Destructive Creations, however, has created a world in which shooting people makes perfect sense. Maybe that’s their goal. Insofar as that is the case, IS Defense should not be allowed to trade on the cachet of political incorrectness or even political relevance: It is simply an alternate-reality shooting gallery.

Some people just want to see the world burn. In a simplified sense, this is true of ISIS. In a different but parallel sense, this is also true of IS Defense, which creates a moral universe in which you can shoot everything in sight without feeling anything at all—especially guilt. The problem with IS Defense, however, is not the senseless violence so much as what it is supposed to mean. Destructive Creations wants to be credited with expressing a veto against ISIS’ actions but cannot be bothered to engage with ISIS in its present form. The game’s alternate-universe clash with ISIS is really just a contrivance that allows players to shoot brown men. In spite of their unwillingness to take moral risks, IS Defense’s developers still want to be credited with political incorrectness. Don’t give them that satisfaction.