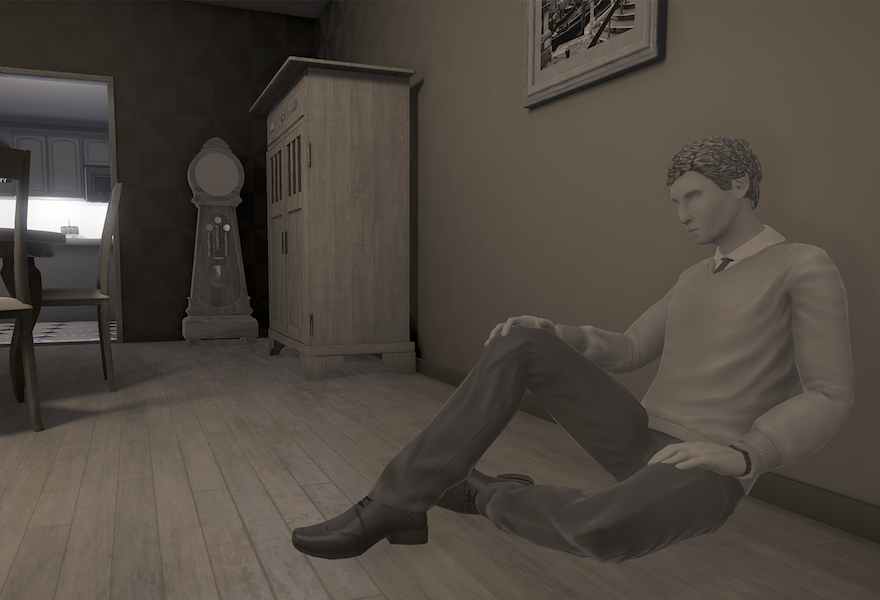 I don’t have many memories from when I was eight-years-old. It feels so long ago, and if I try to think back on them now, they tend to blend together. But there’s one night I’ll never forget, even in the smallest details. We had pizza that evening. I got an A+ on my class project that day. My mom had the news on when I got home, and was staring at a routine story about a car accident with the kind of concentration usually reserved for medical breakthroughs and presidential scandals.

It was the day I lost my father.

Fragments of Him, coming to Steam on May 3rd, is a game about these kinds of memories. In it, the player takes on the role of three people in grief—a grandmother, an ex, and a lover—as they mourn the loss of a man named Will. Wherever they go, they see ghosts of him, unexpected reminders in small mementos and old hallways. It’s an experience too many of us have dealt with, and according to the creators, it’s something “all of us will have to face someday.” But despite its universal nature, it is also deeply personal in how it manifests.


For my mom, it was the reluctance she felt when she couldn’t stand to get rid of any of my father’s old clothes, trying to hold on to anything that reminded her of him. For me, it was the relief I experienced when I moved out of my mom’s home, happy to leave behind the place where I once felt so much pain. For my grandmother, it’s the tragic twist of fate she feels whenever she looks at my face, only to see her deceased son’s features staring back at her. It’s something that no one person can speak to entirely, which is perhaps why Fragments of Him isn’t about just one person.

In a new release trailer, we see just a few of the many different faces grief will take in the game. Will’s grandmother isolates herself at home to dwell on Will’s childhood. Will’s ex reminisces to no one in particular about how she used to feel when “it was just them.” Will’s partner, Harry, isn’t sure how to begin coping, surprised by how often little things remind him of Will. Each of these responses is treated as valid, and are given equal space as stories worth telling.

Fragments of Him isn’t about just one person

There’s a fourth perspective, too, one we previously thought might belong to the person responsible for Will’s death. The new trailer, however, reveals that this perspective is actually that of Will himself, with the player listening in on his final thoughts as he walks unaware to the accident that will take him from his loved ones. It’s a twist that has me wondering what was going through my father’s mind as he drove home from work on the day he died, before his thoughts were cut short when an errant semi-truck broke across the highway median and struck him before he could react. He died instantly, or so the police told us, meaning that he was blissfully unaware of his own passing. Ironic as it sounds, I have a sneaking suspicion that Will’s thoughts will be the happiest in the game, as he is the only one not caught up in grief, and I hope the same was true for my father.

It’s a perspective not often seen in grief narratives, not only of unburdened joy, but of the deceased person themself. More often, these stories tend to sideline their “person of honor” largely as a source of characterization for others, or as an inciting incident for a larger, semi-related narrative. Think of Julia from Firewatch (who, though not deceased, is treated in a similar fashion), or countless superhero origin stories. Rather, Fragments of Him insists that this is just as much Will’s story as anyone else’s, emphasizing that he left this world having given to it more than just tragedy.

The day I turned 20-years-old, my mother slept in. She had just picked me up from college the previous day, and I assumed she was understandably exhausted from the drive. I did, after all, have to take over for her halfway through. Content that she was snoring loudly and thinking she was safe and sound, I decided to go about preparing for my birthday party, eventually leaving to pick up my birthday cake. When I came back, the house was silent.

It was the day I lost my mother.

Like the characters in Fragments of Him, I’m no stranger to seeing ghosts of loved ones. They frequently visit me in my dreams, and sometimes when I’m awake as well, taking the form of graphic flashbacks. It started in the months following my mother’s passing, and though they have become less common now, they still occasionally interrupt me when triggers come from nowhere to remind me of my pain. What follows is a series of rapid images that pierce through my mind with no control. I see myself dropping my cake and running to my mother’s room to discover her lifeless body. I see our dogs cowering in the corner of her room, scared and confused. I see myself calling 911 and thumping on her chest to their instructions, hoping to bring her back even if it was too late. I see the police coldly questioning me as if I had killed her.

death isn’t something you get over

To this day, I feel guilty for leaving, for not calling 911 sooner. My therapist told me that I wasn’t responsible, that I couldn’t have known, that I checked on her before I left. The doctors told me that it was heart disease, that it was inevitable and there was nothing I could have done. They were trying to make me feel like less of a failure for something ultimately out of my control, and even though I know they’re right, it’s still difficult to believe them.

I don’t see—or imagine—ghostly figures walking around my house like the characters in Fragments of Him. Partially because I no longer live in the house where it happened, I’m sure. But I recognize how debilitating the unwanted reminders can be, and how hard it can be to want to give them up despite that. The guilt is infectious. It gives the death a purpose where it previously had none, and it allows you to dwell on the image of the deceased a little longer, even if in the worst possible way.

Perhaps the most relatable part of the trailer for me is a brief moment towards the beginning when Harry snaps back at those who would tell him to find closure. “People talk about getting closure,” he says. “But his story was only half-written.” When my dad died, so many of our closest friends told my mother and I that we would eventually get over it as well. But death isn’t something you get over. That’s repression, and it only makes it worse.  Instead, you have to learn to live a healthy life alongside the grief. However you express it.

Fragments of Him releases for Steam on May 3rd. An Xbox One version is planned for release shortly after, with a PlayStation 4 version coming later this year. To keep up with the game, visit its website.