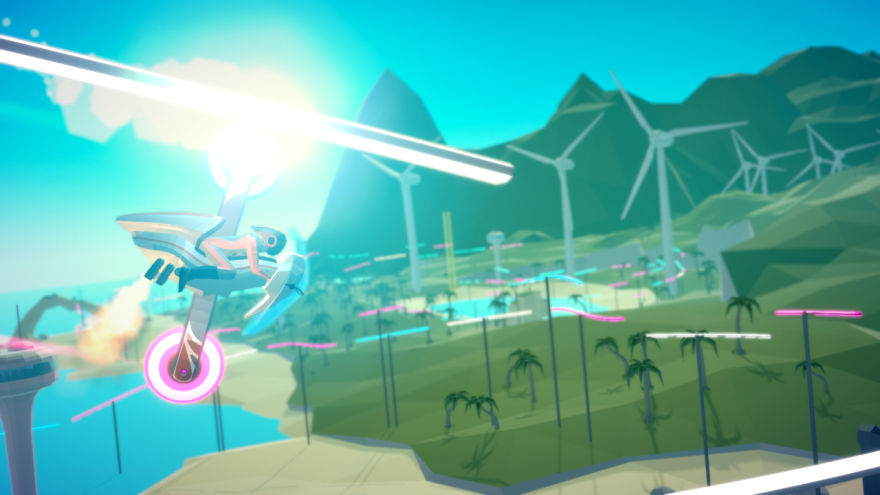 The in-development motorcycle-grinding game FutureGrind is a lot like the classic NES game Uniracers (1994), except that its lone-wheeling ways is perhaps the only similarity that ties the two together. FutureGrind can be more favorably compared to its extreme sports game influences, such as the kickflipping gems Skate (2007) and OlliOlli (2014), to the intense snowboarding action of SSX 3 (2003).

A stunt-platformer at heart, FutureGrind is summed up as a futuristic motorcycle grinding game—similar on the surface to the also motorcycle-focused Trials series. Yet in FutureGrind, players seek to land as many tricks on a track as humanly possible, all while bouncing vertically from color-coded rail to rail. And, trying not to explode while doing so. At the Game Developer’s Conference in March 2016, we caught up with the two-man development team of Matt Rix and Owen Goss to get an inside look at FutureGrind.

The past year in development for FutureGrind, since its announcement in early 2015, has been one full of fine-tuning and aesthetic adjustments. In the game’s first trailer, Goss noted that the rider was static, just mesh; the rider had no weight. In its latest stretch of development, more “ragdoll flail” has been implemented (as all great Trials-y games have). “We spent a lot of time trying to breath life into this character,” said Goss. “So as the bike moves, the rider shifts their weight forward and back as the bike rocks. And as they land, they slam down into the seat. When the crash happens, we turn them into full ragdoll physics objects that tumble.” Giving the rider heightened physics makes them feel more alive than ever before. It can also make for moments of supreme slapstick comedy.

FutureGrind itself is a skill-based game: easy to pick-up, but hard to master. “We tried to create a game that’s very deep in terms of dynamics of learning to play and mastering the optimal paths through the levels,” said Goss. “At its heart the game is very much about rhythm and flow, and what we want the player to feel is when you pull off what you’re trying to do in this game [that] it feels very, very good.” The game’s music, composed by musician and game designer bignic, takes its German electronic inspiration wholeheartedly, with melody-less, pulsing beats soundtracking the experience. The repetition of the music ties into the way the game plays: it’s rhythmic, like the rider’s endless grind-trials itself.

In FutureGrind’s future, literally anything is possible

The vertical-leaning motorcycle physics were inspired by an aforementioned motorcycle series, one that’s prone to exploits and glitches of the hanging variety. “A core idea of the game is [to] make something where hanging and swinging from objects is really important to how it feels, and something where getting a high score should look cool,” said Rix. “There shouldn’t be a way where you can do glitchy weird stuff to get a high score, it should be something that has a very smooth flow to it, that feels really good to do, and [is] entertaining to watch.”

Rix and Goss plan to have six unique environments in the final game, with multiple tracks per environment. As the player progresses through the game, they unlock new abilities, and will be able to revisit old tracks and play them in an entirely new way. “We want it to feel fresh the whole time, basically,” said Rix. The environments themselves all show new sights of FutureGrind’s ever-positive future, with shimmering beaches and pristine cityscapes, to even a mountain-filled area. The mountain level in particular is inspired by Goss’ time living in Vancouver. “I used to go up to Whistler to ski a lot and I loved that feeling of being in the mountains,” said Goss. “The mountain level is very much inspired by the photographs I had taken while I was skiing.”

FutureGrind features a bright and colorful world, laden with windmills and glossy cities (which are inspired by the parkour action game Mirror’s Edge (2008), as it turns out), all hoping to account contribute to the game’s subtle, environmental storytelling—a world that feels alive and lived in. “When we were coming up with the game, there were so many dystopian future things, and we wanted something that was more positive,” said Rix. “It’s very much like an optimistic future.” In FutureGrind’s future, literally anything is possible. Even gravity-defying motorcycle grinding.

For more on FutureGrind and its development, check out Milkbag Games’ site here. FutureGrind is due for release sometime in late Summer/early Fall for PS4, PC, and Mac.