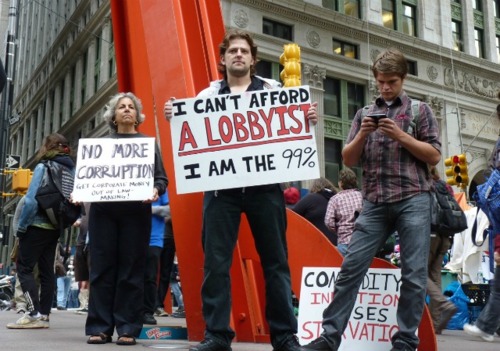 Occupy Wall Street has captivated media attention, arrested the political and economic debates of countries worldwide, and sparked often violent tensions with police and local communities since its rag-tag beginnings in Zuccotti Park less than three months ago. One area of inquiry that has remained relatively untouched throughout the frequent inquiries into the movement’s ideological underpinnings and political objectives, however, is the influence of open-source software. Last week’s issue of The New Yorker featured an exploration into the movement’s origins and future projections that describes the impact of Linux’s coding ethics had on the movement:

One influence that is often cited by the movement is open-source software, such as Linux, an operating system that competes with Microsoft Windows and Apple’s OS but doesn’t have an owner or a chief engineer. A programmer named Linus Torvalds came up with the idea. Thousands of unpaid amateurs joined him and then eventually organized into work groups. Some coders have more influence than others, but anyone can modify the software and no one can sell it. According to Justine Tunney, who continues to help run OccupyWallSt.org, “There is leadership in the sense of deference, just as people defer to Linus Torvalds. But the moment people stop respecting Torvalds, they can fork it”-meaning copy what’s been built and use it to build something else.

Open-sourced software seems like more of a rarity than ever these days as game developers and publishers promise harsh punishments and stringent DRM to combat piracy and “used games culture.”

How the ethics and practices of open-source software and its yeasayers in Occupy Wall Street is hard to say, but at least one developer has already admitted to inspiration from the movement. This month, Irrational Games’ creative director Ken Levine reported that he was periodically visiting Occupy Boston to gain additional insight into radical movements for his studio’s upcoming Bioshock Infinite. Levine explained in an interview with The Washington Post that studying the movement helped him understand how wide-spread social discontent can lead to an uprising:

Leftist movements are always less organized. There’s a messaging machine on the right, where they’ll come up with something and the next day you have 10, 20 people out on the news using those points. […] Leftist groups tend not to like authority; nobody in them tends to listen to it. So Occupy Wall Street has been helping me because I’ve been struggling to figure out how the Vox Populi get to the point in the demo. Throughout the game, you’re actually watching them – you see in the beginning of the game that they’re a dead movement and a movement that really fails, and it picks up steam based upon your actions.

Bioshock as a series has always contained strong political undercurrents, or overt political messages, throughout the story. Though much of the series has referenced a history of radicalism far past—Ayn Rand’s “objectivism,” the 19th century anti-immigration Know Nothing party. “As we developed these opposing groups,” he continued, “the Founders versus the Vox Populi, it was interesting to see this play out in real time, so that the fictional movements we’re creating that are set in this heightened past are almost being duplicated in reality.”

While not revealing any details of the story in Bioshock Infinite, Levine did say that it holds a much darker future for radical protests than anything he hopes to see coming out of Occupy Wall Street or the Tea Party movements. “I hope the real-life movements don’t head to the same place, though,” he added. “I’m not going anywhere nice, I’ll tell you that much.”

[Via The New Yorker and Reuters]