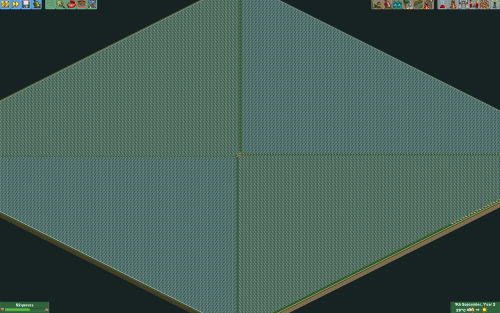 For all its lighthearted charm, RollerCoaster Tycoon has been oddly capable of indulging the morbid propensities of its players over the years. There’s not a player out there who isn’t guilty of picking up their tiny little park guests and dropping them in the Swan Boat lake, or trying to design a deliberately broken ride that would end up crashing in a storm of fire and metal at least once. Perhaps it was the fact that this otherwise cute sim game could let you do these destructive things in the first place that made players experiment so.

There’s another means of torture that some particularly creative RollerCoaster Tycoon fans have utilized, though. The most infamous of all is probably Mr. Bones Wild Ride, popularized on a 4chan thread that first introduced the madness of its 70-minute duration through a series of screenshots, but another player recently unveiled a new amusement park monstrosity called Kairos – The Slow. Kairos takes a whopping 210 days to complete. Not in-game days, either. Real days. 303,383 minutes. Over 3,000 in-game years. RIP park goers.

The ride itself is one of the slower options offered in RollerCoaster Tycoon’s line-up of theme park attractions. It’s a Car Ride, like Mr. Bones, but it’s the physics rule its creator discovered while building this hellish creation that allows for its insufferable length. According to the architect of this nightmare: “When a roller coaster travels along a track of constant height its speed exponentially decays towards zero but never stops.”

an unrelenting doom coil of a ride

At first glance, Kairos might look like a spiraling descent into the underworld, but it’s just the isometric perspective fooling you. The actual ride is built on the largest map in the game, with tracks wrapping flat around the perimeter and spiraling into the center of the level. From there, the cars are supposed to roll back, complete the spiral a second time, and reach the initial station at the start. Brakes at the beginning of the ride slow the cars down to 4 mph, making for some painfully slow speeds throughout as that number decreases.

There’s no footage of Kairos outside of this Tumblr post documenting it, but you can see The Wheel of Life and Death, another creation by the same player, below—a fever dream of interlocking tracks like an eternal pattern in some abstract medieval hell.


RollerCoaster Tycoon is a strange game. It was programmed by one man… in assembly language. The originals have stood the test of time in ways only the best 90s and early 2000s PC games do, even after a few sequels. That’s thanks not just to its solid foundation, but a creative fanbase that continues to output feats of engineering genius, from perfect roller coasters to viable microparks, but also, occasionally, an unrelenting doom coil of a ride that takes over 3,000 in-game years for unsuspecting guests to complete.