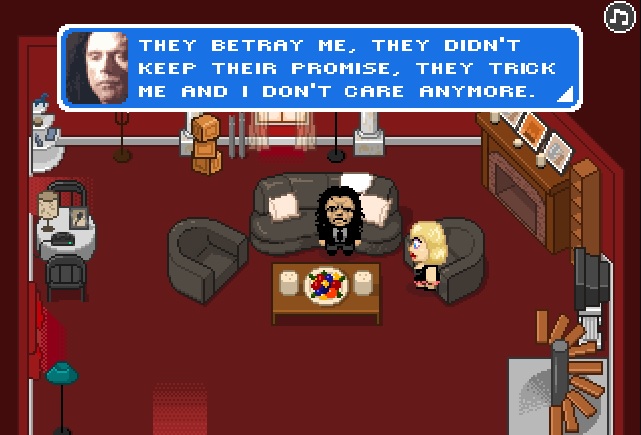 What happens when Johnny goes to work? What happens when he buys the red dress or makes love to his fiancée Lisa? If you’ve ever wanted to know, there is an answer: The Room (2003), the best worst movie of all time, now has an adventure game adaptation.

A 2D adventure game, The Room Tribute “is a totally unofficial game made simply out of [an] undying love of the movie.” It follows the course of the movie through the world of Johnny—The Room’s main character, a bank employee who is having problems with the people in his life that he should be able to trust, but are acting in ways that don’t benefit him. If this seems like a strange premise for a game, it’s a pretty strange premise for a movie as well.

The Room is considered one of the worst movies of all time, a creation of actor/director/producer/writer Tommy Wiseau. For those uninitiated into the world of “so bad it’s good,” the more titles you can add to your creator’s name the worse of a sign that is for the quality of the film, the talent stretched thin across so many roles. It falls into that same pantheon of the great bad movies—Plan 9 From Outer Space (1959), Troll 2 (1990), and Miami Connection (1987)—has achieved cult-like status for its alien strangeness. But there’s a specific quality to The Room that makes it fodder for tribute, at least in the mind of one of the project’s designers Tom Fulp: “The Room is the most pure of the ‘so bad its good’ movies and it has the most heart. A lot of the other ‘bad’ movies feel like they’re intentionally hamming it up and playing to the fans of the genre, whereas The Room feels like it honestly is just trying to be a good movie.”

For their videogame tribute, the game’s creators chose to follow the character of Johnny—the game is told through his perspective, and you only see the scenes from the movie that he was present for. The film follows multiple perspectives, from a rooftop drug deal with Denny, to Lisa cheating on Johnny with his best friend. The game only follows Johnny: “The film mostly revolves around Johnny so it made sense to make him the playable character,” said the game’s creators. “It was a fun exercise to capture the story of the film while always keeping the player in the role of Johnny.”

By doing this, they manage to create a much more sympathetic character than if they had just recreated the situations that take place on screen during the film. In writing Johnny, Wiseau has crafted himself into the ultimate Mary Sue character—a good guy who is great to all his friends who everyone likes, but who is just perpetually screwed over by bad people (women). He’s a character without flaws, a characteristic that makes him difficult to relate to. While it wasn’t the original intention of the game, Fulp and his fellow game makers manage to make Johnny somehow sympathetic: “When you watch the film you can detach yourself from Johnny but the game forces you to BECOME Johnny and experience the events of the film through his eyes.”

You can play the Room Tribute on Newgrounds.