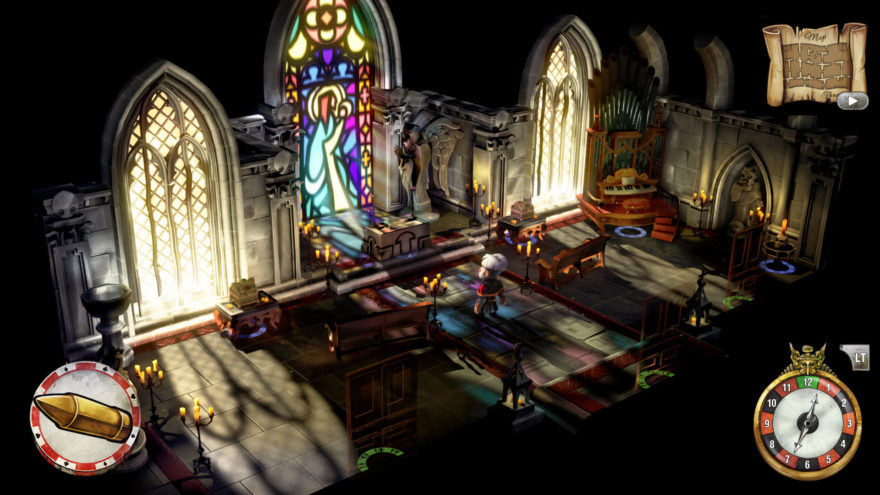 I have never attended a fancy socialite soirée before. On the chance occasion that my mind wanders as to what such experience would be like, my imagination inevitably concocts a scenario not unlike Edgar Allan Poe’s The Masque of the Red Death (1842) mixed with a particularly fiendish round of Clue. A grand celebratory occasion equal parts bacchanalian and cockamamie. A new puzzle adventure announced by Tequila Works, called The Sexy Brutale, does little to disabuse me of this admittedly far-fetched fantasy, instead choosing to go all in on the inherent absurdity that permeates the glossy allure of high society.

Set at a lavish get-together held at the game’s titular English mansion-turned-casino funhouse across a single perpetually-recurring day à la Groundhog Day (1993), the game’s premise is not unlike Anthony E. Pratt’s aforementioned murder mystery game. Players assume the role of Lafcadio Boone, an elderly priest who must foil the deadly machinations of the estate’s mysterious Marquis and save the lives of all those in attendance.


To do this, Lafcadio must hide, listen, and learn the stories of each of the game’s nine guests and hopefully, by doing so, orchestrate their safe passage through the mansion’s deadly traps set by the Marquis’ murderous staff. Only through cunning, guile, and patience will you be able to see the party and yourself safely through the night and unearth the terrible secret that lies at the heart of the Sexy Brutale.

“I immediately knew we had to be part of it”

Conceived in middle of the protracted development of Tequila Work’s previously announced Rime, The Sexy Brutale is the studio’s first collaborative project with newly-formed UK developer Cavalier Game Studios. “When Cavalier asked for our feedback on their build of The Sexy Brutale, I immediately knew we had to be part of it,” said Tequila Works CEO Raúl Rubio. “By combining the unique talents of both our teams we are proud to have created a genuinely intriguing and unforgettable experience for players to enjoy.”

With the promise of occult capabilities, a conceptually mutable puzzle premise, and a darkly humorous murder plot, The Sexy Brutale seems poised to set itself apart from the crowd when it releases early next year.

The Sexy Brutale is coming to PC, PlayStation 4, and Xbox One in early 2017. Find out more on its website.