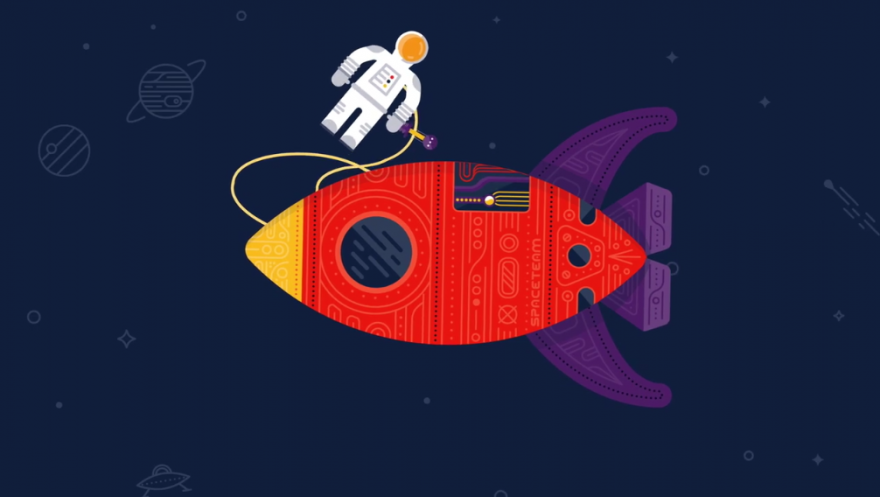 The Spaceteam card game is chaos. Like its forebear on Android and Apple, it’s a cooperative game that forces you and some friends to scramble with tools and ailing apparatuses to fix your spaceship before you are swallowed by a black hole. As an adaptation, it’s faithful to the frenetic shouting of the original Spaceteam (2012), which was itself a faithful homage to the technobabble of Star Trek and giant-mecha sci-fi films. Instead of a digital interface, this iteration replaces it with cards and a timer, which are easier to wipe clean of beer stains. Better still, the components and box sport a crisp visual flare, popping with bright colors and symbols.

Spaceteam is among the first app store-to-tabletop games: a fact that attests to the challenge of its translation. To manage the process, designers Matthew Sisson and Tommy West clearly drew from their past in designing escape rooms, making a distinct imprint on the experience of the Spaceteam card game, which is engineered for maximum adrenaline rush.

The mechanics are simple: three to six players (nine, with expansion) flip over and resolve separate malfunction decks as they dig for six Systems Go cards that signify victory. Every other card represents some kind of malfunction or anomaly, some system gone awry. To solve a malfunction, slap down the right combo of tools and then draw the next card. The catch is that no one has the right tools and everyone is shouting for what they need at the same time, because a single game only lasts five minutes.

a game about organizing chaos

It’s a hectic and purposefully broken game. The card design engenders incompetence: a malfunction might specify its tool by name, or by picture, or by any of five inscrutable types. The game is best summed up in the following transcript of a game I played the other night:

“I need a Rotomist Container.”

“Does anyone have a purple whisk-looking thing and, like, a sun tool? It’s a sun-type tool. Looks like a sun.”

“I need an electric-type tool! Does anyone have an electric type tool?”

“GUYS, I NEED A ROTOMIST CONTAINER”

Everything happens at lightning speed, colored by the group personality and fueled by the five-minute timer. Anyone can be panicked and loud for just five minutes. This core concept—shouting for parts—is what makes it so compulsively playable. It’s a game that is destined to be unboxed at parties and tutored under the influence of alcohol, caffeine, or whatever you happen to be smoking at the time. The adrenaline-soaked shouting matches it encourages are what make it ideal for breaking the ice with new people. 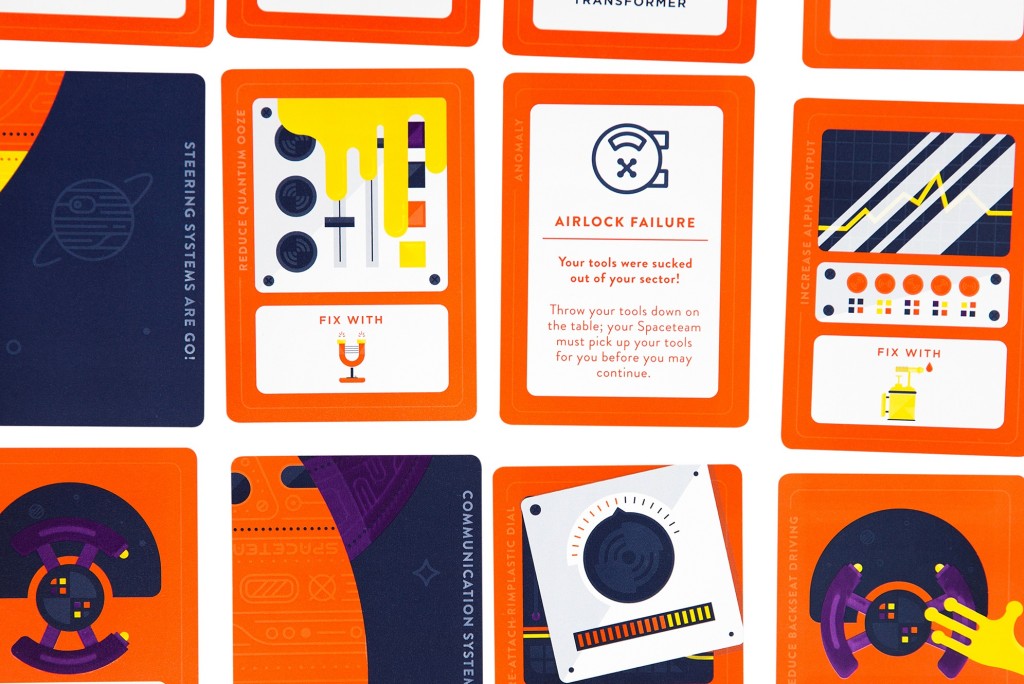 The problem with Spaceteam is that it cannot last much beyond that initial encounter among strangers. And how it instigates the shouting that defines it is where its strengths deteriorate into weaknesses. It is undoubtedly a game about organizing chaos. Each game includes a few rogue anomaly cards, which add some unique flavor. The “Man Overboard” anomaly mandates players to physically pull back another player before they can continue playing, while the “Robot” anomaly forces a player to finish the game without using their thumbs. However, most of the chaotic interplay comes from unfamiliarity, from not knowing what a symbol means or even what the five obtusely labeled tool subtypes mean. The point of the game is to be broken, for players to be inundated with unfamiliar symbols and technology. Knowing the game makes it less interesting, and embarrassingly easy. What happens when a group of players knows the game so well that they can tell the Slime Discpistion requires the Contracting Propeller, Quasipaddle and Duotronic Capacitor? The designers’ solution seems to be inflation.

There’s nothing deeper at play in Spaceteam: it’s fast, idiotic fun. It’s the type of game that begs to be played at parties and incorporated into drinking games. It occupies the accessible yet slightly edgy segment of games like Cards Against Humanity and Exploding Kittens. For all the chaos and urgency it induces, this adaptation can’t quite approximate the cracked consoles and trashy madness of its app forebear.

The Spaceteam card game is available to purchase on Amazon.