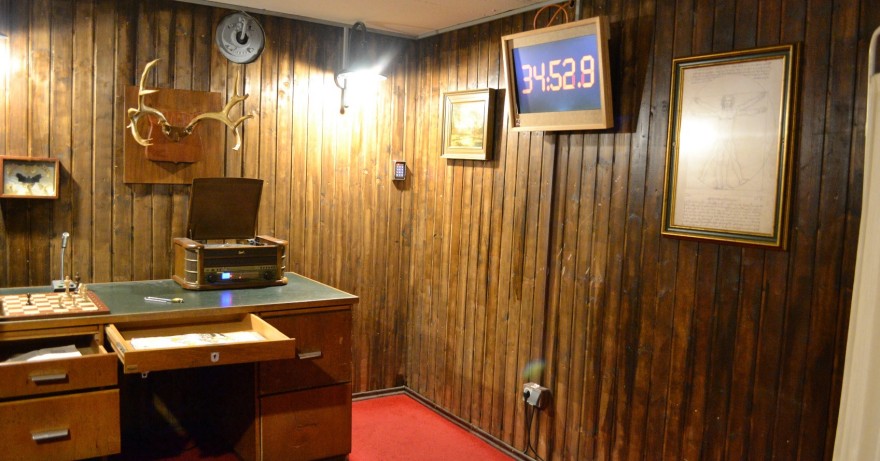 It is Saturday night, February 27th, and I am trapped in a submarine. Moments ago I was dancing on my tip-toes across the sidewalk, oddly gallant amid the bitter air of the Bristol harborside. Now there’s a tall man in a yellow jacket bent-double in the corner, sick from weeks of tinned peaches—I try to stare through his facade before shying away as his eyes turn towards mine. I am not really on a submarine. We are pretending. Five adults fumbling around a concealed wooden cube for printed cards and hidden cabinets. A digital timer counts down from 60 minutes to zero on one of the walls. Incomplete grids, nautical maps, and a rotary phone hang on the others. At the center of the room is a periscope that doesn’t work yet. We have to get out of here, quickly.

This was my first time having played an escape game. Perhaps that’s not true. Sure, I’ve played many “escape games” in my time; those causal time-wasters that pop-up in your web browser. In those, I sat at my computer, collecting a trove of keys and collectibles, frantically clicking around the walls and floor of each room. This type of escape game is derived from the grander genre of videogames known as adventure games. The format varies but plays largely the same—point-and-click through environments, inventory screens, and dialog—however, the goal is steadfast, always being to escape from a place where you have been trapped. Now, following on from these computer-based experiences as well as a tradition of popular ’90s television shows such as The Crystal Maze, the escape game is going physical, and it looks like it’ll be going big.

look through keyholes to view hints

I know this as my friends know this, in particular, the two of our party of five trapped in that made-up submarine who have just launched EscapeGameHub. Between them and the other two members of their team they have played 25 escape games around the world. That number seems to rise almost every other weekend but it’s not enough to keep up. “Since 2010, escape games have grown from 0 games across the world to now well over 6000,” my friend Gareth Beeston tells me, who is EscapeGameHub’s marketing director. “There are currently around 250 escape games in the UK across about 150 venues, with the rate of new escape games being opened at one a week, according to our latest records.”

The one we played in Bristol is called Fathom Escape, which Beeston tells me is one of the better themes he’s seen out of the many escape games he’s played. Others he highlights includes Cyantist in Bournemouth, in which you have to find an antidote to a deadly poison filling the room (you don’t actually get poisoned, of course); City Mazes in Cardiff, which offer two options, either to beat Jack and Rose to the top deck of the Titanic, or survive a nuclear fallout in a 1950s home; and Escape Rooms Durham, whose debut room has you rifling through the twee, polished oak office of a peculiar gentleman. His favorite, however, is the detective-themed room of Salisbury Escape, not only due to the puzzles and narrative, but also because the owners “make sure that they are fully in character from the moment they open the door, all the way through the brief, and well into the game.”

The role-playing aspect of live escape room games isn’t going to be for everyone. I found that I couldn’t fully commit to it myself. But that doesn’t matter too much. As while the owners of each escape room brings a histrionic pretense to the whole set-up, you can mostly ignore it, instead focusing on solving the physical objects in your hands. There’s nothing fake about the puzzle boxes, large iron keys, wind-up lights, and treasure chests. And it’s this that proves the biggest appeal. It’s so rare to be able to touch objects like these—even if they don’t have any actual historical value—as either they are seen behind glass in museums, or only viewed from a distance on a film or TV set, or perhaps inside a videogame. Virtual reality can’t match the distinct pleasure of turning a key in a lock and feeling it click in your fingertips as a lid pops open.

“you will want to play more, I can guarantee it”

Outside of the UK and further into Europe, Beeston has found some real treasures, including an escape room based on horror film The Ring (2002) in Poland, which is played in the dark by torchlight and involves staring into a well and rearranging creepy dolls. Others are similarly creative but in smaller bursts, having him look through keyholes to view hints, and use an old 30s-style telephone to ring someone on the other end for a clue. It’s this type of detail and experience-based feedback that the team at EscapeGameHub are hoping their new website will provide. It’s something that they were looking for when getting into escape games last year but couldn’t find—hence, they made it themselves. 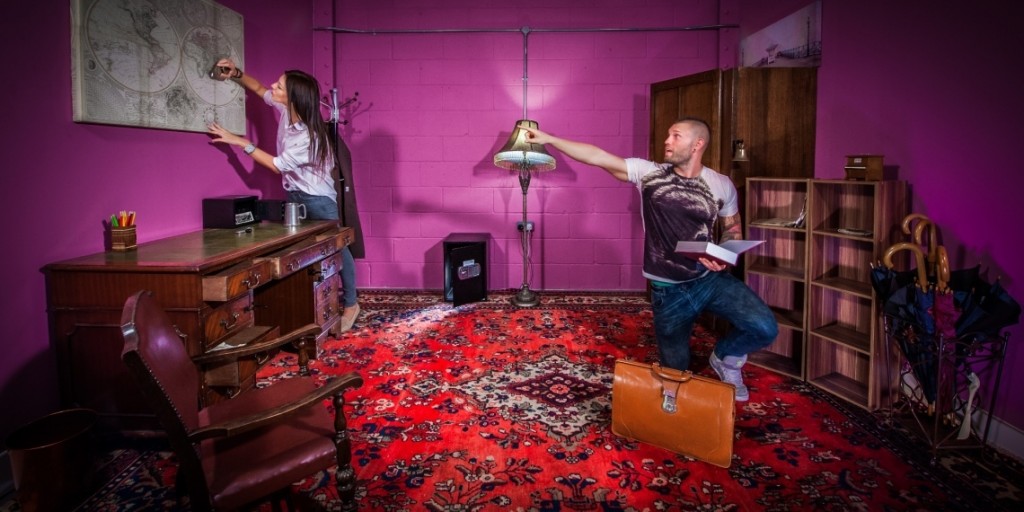 Grandpa’s Last Will, by Lock’d in London

First and foremost, the idea is for the website to act as an easy-to-use search engine for escape games. You can search by location and see what escape games are available there, including descriptions, images, and vital info such as price, length of time, and number of players allowed. The website also allows for people who have played an escape game to leave a written review and rate it out of five stars. It’s basic stuff but it’s something that until now has been crucially missing for anyone into escape games. Because here’s the thing with escape games: once you’ve played one you can’t really play it again, as you’ll already know the solutions. And so, to keep playing them, you need to find others. EscapeGameHub should make feeding that particular hobby easier.

For now, EscapeGameHub is focused on the UK but it will reach other countries over time. Especially as escape games continue to grow, too. Right now, Beeston said escape games are in their “infancy,” easily trumped in popularity by other group activities such as bowling, laser tag, and paintball. But knowledge of their existence is steadily spreading through the stories that people are usually very eager to share after having played them. As to mine, we didn’t escape the submarine in time, but we were on the cusp of doing so when the timer reached zero, apparently. If nothing else it’s incensed me with an urge to find another to play and escape within the given time frame. “Once you have played just one escape game, you will want to play more, I can guarantee it,” Beeston said to me before I played. I know what he means now.

You can check out EscapeGameHub here.

Header image from EXIT Berlin, via An English Man in Berlin