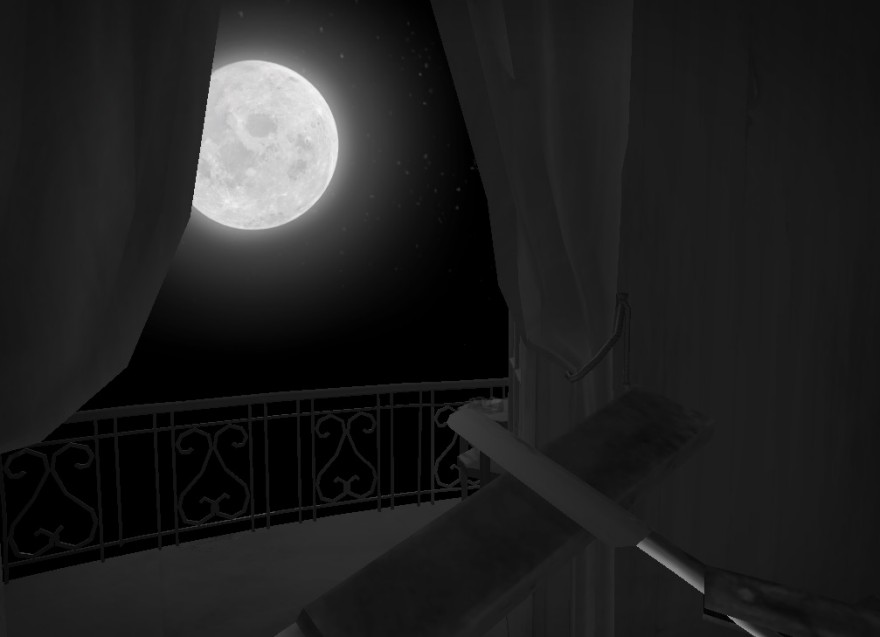 The Tender Cut is a game that asks a question that cannot be answered: “What the heck is going on in this guy’s head?” The guy has a name. It’s Luis Bunuel, one of the pioneers in surrealist cinema. His first film, 1929’s Un Chien Andalou (An Andalusian Dog), is infamous for its shocking opener of a woman getting her eye sliced in half with a razor blade. There’s an extreme close-up just when you think the camera is about to cut away, the vitreous humor oozing out from her expressionless face, and into your nightmares. It’s gross and unexpected.

The title The Tender Cut is a reference to that exact moment in the film. And it’s this that the game’s two creators take as a center to twirl a wordless interactive narrative around. The idea is to give possible insight into what might have driven Bunuel’s character in the film to perform the unceremonious ocular surgery. The method here is to have you act out as the character in the same space and with the same props that Bunuel did.

interpreting the hallucinations of a troubled mind.

It all takes place in a single room. But before you arrive, you have to select from a mosaic of flowers that look disturbingly similar to various body parts. You choose one unknowing the significance that this choice may have. I’ve picked a number of these flowers myself over multiple replays, and it seems that your selection has no effect in the ensuing game, but it is perhaps intended to prepare your brain to interpret the surreal images you’re about to confront.

An old television made of wood repeats the opening scene from Un Chien Andalou. It’s the first thing you see in The Tender Cut, inviting you to repeat the actions that Bunuel does from the first-person perspective you are granted. But before you do, around the room and its connected balcony that overlooks the full moon, are symbols from the film (which, themselves, are from Bunuel’s dreams). Each interaction you have with these may help you to shape the personality that you occupy—it’s like interpreting the hallucinations of a troubled mind. Ants crawl from a hole in the wall. A key without a matching lock drops from behind a picture. A book is opened on a page that reads “Huit ans apres” (eight years later).”

Once you’ve taken all this in, no doubt puzzled by what it could all mean (if anything), you follow the orchestrated sequence as seen in the film. You can light a cigarette and blow smoke into the night air which, I found, immediately brings with it a pensive quality. You smoke and you think. Afterwards, there’s only one thing left to do. You go outside, stub out the cigarette on the bronze ashtray, tehn find the razor blade sat on the balcony before sharpening it on a wooden paddle. Then, blade in hand, you stare at the moon, which is steadily engulfed by a gigantic eye. The camera tries to fight away from it, as if terrified by this disturbing notion swelling in front of you—then relief is found upon slicing it open. It’s almost like popping an irritating zit.

Shortly after, you head indoors to find that the room you were in before has shifted, it’s emptier, left with only the television and a new door in the wall. From here, you can find at least two different endings, none of which help to settle the confusion the vignette throws around. So, no, The Tender Cut doesn’t really make any progress in its investigation of Bunuel’s character. But how could it? After all, Un Chien Andalou‘s plot is entirely irrational; it’s literally born from the weird dreams that Bunuel and Dali had, which they then weaved together in sequence and dared to call a film.

What it does do rather successfully is tease out of you the very same reverie-like state of dazed curiousity that Bunuel’s film does. Strange events blend into each other separate from the logic of time and space, and in jumping from one intense scene to another, we try to fill in the gaps to explain what’s going on. It might be a pointless exercise but it’s one we can’t resist, delighting in the chance to revel in a baffling fiction, one where reality is transfigured by the wild possibilities of dreams.

You can download The Tender Cut on Game Jolt, IndieDB, and itch.io.