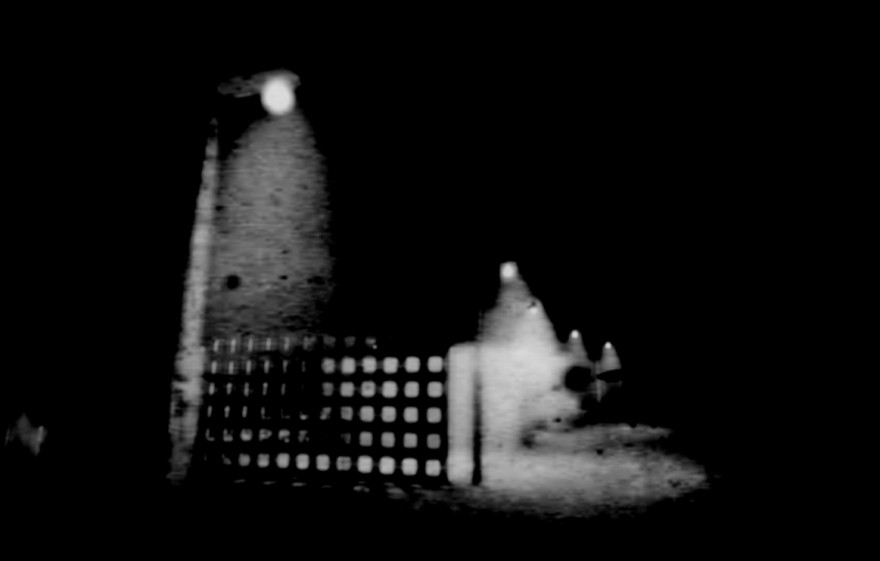 There’s no guessing as to where Letter To A Friend gets its look. The grey, flickering lights; the darkness heavy and consuming as miasma; everything out-of-focus, fuzzed and grainy as if seen through an old, dying lens. The creator needn’t say that its “visual references come from expressionistic silent movies and old analog recordings” for us to know that is the case. It’s a staggering recreation that speaks for itself.

Or rather, it doesn’t speak at all, and that’s part of what makes it so creepy. Everything from the frail shutter speed to the exposed scratches, dust, and hair that makes early film reel so easily identifiable has been simulated. Typically, this look is used by filmmakers as visual shorthand for something old-fashioned, easily dating the footage at around the early 20th century (it’s also used especially in ghost stories when explaining the origins of the disturbed, typically Victorian-era spirit). That may be the case in Letter To A Friend but the aesthetic is used more to achieve an unsettling sense of terror more than anything else. This is the same light and color tones that Nosferatu lurched up the stairs to the bedroom in that iconic horror film moment.

The narrative of Letter To A Friend is set-up as if a memory of a night once spooked. We are reliving a nighttime visit at a train station, something the character we inhabit does regularly, presumably after work or similar affair. But on this night there was a haunt. We are made uneasy from the start as the silent film recreation inhibits our sight as well as our sound. The dark is noticeably more impenetrable than it would be if we had clear vision. Look across the train tracks and you can make out no outlines or even the slightest of lights; only more pure darkness. A train passes right at the beginning without the loud sound we’d expect, clattering over the rails. The ubiquitous muted buzz we are left with instead lets us know that hearing won’t be an aid either. We are vulnerable to anything lurking in the dark that may creep up on us.

It is everything we dread.

What the game does from there is, at first, brilliantly disturbing. A silhouetted figure ambles silently under the light cones of streetlamps in a car park. We don’t know who they are. No one else is around and we are forced to wait for a train. Next, we see a faint dark figure move slowly across a lit window in a large building on the other side of the train tracks. This really is Nosferatu. Finally, they appear on the train platform itself, appearing as a menacing silhouette. It is everything we dread. Their stillness leaves us in suspense. What are they going to do now that they are so close to us?

What works here is that suspense. The figure is ambiguous, uncanny, and otherworldly. Where it all falls apart is when, right at the end, the dark figure is seen up close and its mystery is replaced with goofiness. Another slight slip-up is a lack of stringency. While the intertitles that tell the story provide appropriate segmentation for each part of the night, you are left wandering too long, aimlessly, trying to activate the next title. If it were snappier the gradual terror of the experience would be so much more effective.

Still, for a game made in a matter of hours as part of the Asylum Jam it’s an accomplished proof-of-concept. And no degree of failure in other parts of the game are able to let down the anxiousness present in its silent film aesthetic. Hopefully it isn’t left unexplored from here but is either expanded or used in horror games to a similar effect. It deserves that much.

You can download Letter To A Friend on Game Jolt.