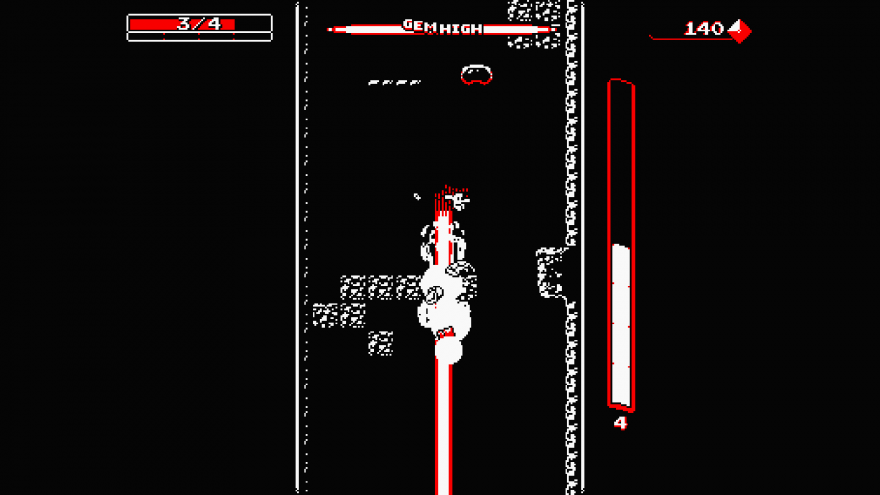 It was the jesting gripe heard ‘round the panel room at the Game Developer’s Conference on Monday, March 14th. A grievance that, surprisingly, came from game developer Ojiro Fumoto himself while playing a live tech demo of an early prototype of his own game: Downwell. Fumoto’s vertigo-inducing roguelike Downwell released late last year to critical acclaim, and soon became the hot topic at everyone’s fingertips. In the aptly named panel, “Polishing the Boots – Designing Downwell Around One Key Mechanic,” Fumoto detailed the many iterations his now infamous “gunboot” mechanic took on through the game’s 15-month development process.

“I set out to make a game that I would want to play,” Fumoto said. He directly cited his primary inspiration of another charming roguelike. “I am in love with Spelunky,” he said succinctly of his appreciation for the 2008 title. While today’s Downwell is no Spelunky copycat, initially, it might have appeared as such.

Before thinking up the ephemeral “gunboots” mechanic, Downwell was simply a downwards-winding platformer. And simply put: there wasn’t much there. The character leaped from disintegrating block to block, but absent was the heightened intensity of the vertical-scrolling, shoot-em-up game sitting in our phones and PCs today. Fumoto knew there was something missing.

As legendary developer (and prolifically quoted) Shigeru Miyamoto once said, “A good idea is something that does not solve just one single problem, but rather can solve multiple problems at once.” Fumoto absorbed Miyamoto’s piece of advice, and he implemented an idea of gun-like shoes that doubled as both an offensive mechanic, as well as one to propel movement in the game. A game mechanic that solved that early prototype’s two primary problems: pacing and action.

Thinking up the idea of gunboots wasn’t the end, but rather the beginning to what Downwell shipped off to be. Another rough idea for Downwell’s gunboots was the need for ammo. Should the player hop to ammo boxes, as was in the original prototype, or would that break the pace of the game? That’s when the phrase “stammo” came to fruition. “Stammo” is a medley of stamina-esque replenished ammo with every brief landing on a platform, inspired by the similar usage of stamina in Dark Souls (2014). The player can use stamina by taking action, but also can quickly meet defeat if not using it at all.

Another glaring problem Fumoto faced in another early prototype was mastering the fluidity in movement. In its original form, Downwell was heavy on the platforming, and low on the freefalling. By creating a more open space, and the ability to see platforms in the distance, Fumoto crafted a more fair, yet strategic experience. In addition to implementing a combo-counter, a “higher difficulty” for those who want it, Fumoto explained, the game’s gunboots were at last starting to see its polish. At the 10-month mark of his 15-month development process and many, many prototypes later, Fumoto was at long last confident in the mechanics of his game’s bullet-wielding boots.

For advice on his own experience to other developers, Fumoto’s take-away was simple: “Focus on what makes your game special.” Whether it’s gunboots or some other wild thing, polish it up, just like you would a good pair of boots.