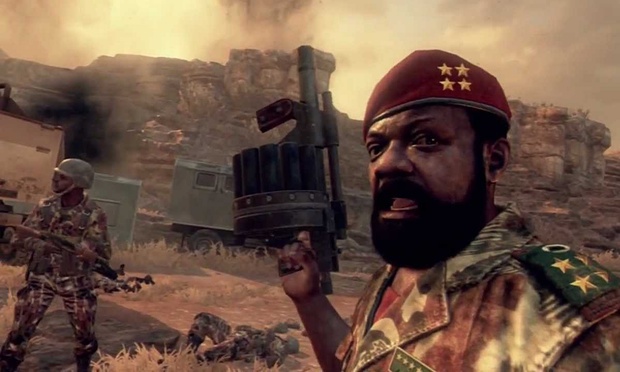 Games that seek to represent significant historical phenomena are, by their very nature, reductive. Real-time gameplay is, Timebound’s multi-year push notifications notwithstanding, not on the table. Beyond the time imperative, creative works must also make narrative and dramatic choices. These constraints are in no way exclusive to games; the process of making media necessarily involves making artistic and practical choices. Up to a point, that’s fine. In fact, it’s desirable. But what recourse is there when these choices are disputed?

Three children of the Angolan “rebel” leader Joseph Savimbi recently announced that they were suing Activision Blizzard’s French subsidiary for the depiction of their father in their 2012 title, Call of Duty: Black Ops II. They allege that the game defames Savimbi by portraying him as a murderous “barbarian.” As such, they are seeking €1 million in damages.

“Black Ops II paints Savimbi as some kind of brute”

The problem Savimbi’s children raise can either be thought of in narrative or legal terms. The former was addressed when the game came out in 2012. As Marissa Moorman and Sean Jacobs wrote at the time:

“Black Ops II paints Savimbi as some kind of brute with his halting English and screams. But he was, in fact, a consummate media figure and understood the power of western press on public opinion. Three clips – the first in French (with Portuguese subtitles), the second in Portuguese, and a third in which Savimbi answers questions, in English, at a surreal ‘Unita News Conference with Republicans’ – provide a brief contrast to his depiction in Black Ops II. He spoke many languages fluently. His English speech and diction was refined – not the kind of brutish bush English they give him.”

In purely creative terms, Black Ops II is uncharitable to Savimbi. His record does not merit complete deference—his UNITA forces fought for Angola’s liberation from Portugal before forming an uneasy truce with the Portuguese against the Popular Movement for the Liberation of Angola—but Activision’s approach to this complicated story is heavy handed at best. It’s also worth noting that Savimbi only really shows up as local color when one white character is in the country to assist another. None of these complaints necessarily merit legal redress. Indeed, the legal standard Savimbi’s children must overcome is significant. “France does have laws that permit a defamation action in the case where the alleged defamation affects the deceased person’s relatives in that it causes them suffering or reflect upon their reputation,” media lawyer Alex Tutty explained to The Guardian. French defamation law does differ from its American equivalent, under which Manuel Noriega previously sued Activision for his representation in the same game, but the odds are still against Savimbi’s children even if France is a more favourable jurisdiction.

Courts are … not really capable of settling narrative debates

This case does little to separate the legal and narrative facets of representation. Savimbi’s children clearly object to the game’s representation of their father, whereas Activision, per The Guardian, maintains that its representation of the man was favorable. At its core, this is a debate about textual interpretation. Courts can settle such matters on relatively narrow grounds, but such outcomes rarely settle the underlying debate. There is a significant range of options within the realm of what courts will allow, and most discussions of narrative choices fall within that parameter. Courts are, for entirely logical reasons, not really capable of settling narrative debates.

Conversely, narratives cannot be looked to as alternate forums for legal disputes. Most recently, this has been the case with Netflix’s Making a Murderer. Where the legal system fails, the theory goes, documentarians can step in. There are, of course, limitations to this theory. As the New Yorker’s Kathryn Schulz points out:

“we still have not thought seriously about what it means when a private investigative project—bound by no rules of procedure, answerable to nothing but ratings, shaped only by the ethics and aptitude of its makers—comes to serve as our court of last resort.”

The different strengths of legal and narrative systems are hardly new, but they are problematized by an increasingly legalistic element in discussions of popular culture. As part of the latest revitalization of true-crime, audio and video documentaries are increasingly used to work out problems the legal system did not. Conversely, with the rise of franchises in film, television, and games, characters are increasingly thought of as intellectual property—legal and economic units above all else. What sort of finality can we ever expect in such a culture? Narrow legal answers that leave everyone unsatisfied, albeit for understandable reasons. In all likelihood, the Savimbi children will fail in their pursuit of damages, which will end their chapter of the story but leave the broader question of how to interpret the way Black Ops II treats historical figures exactly where it always was.